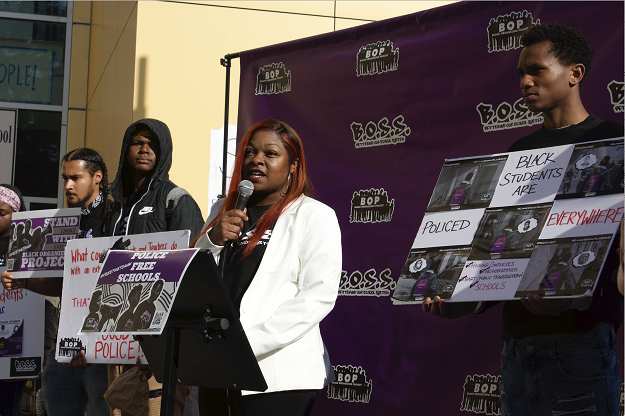 The unanimous vote came after Black Organizing Project (BOP), who describes itself as a “Black member-led community organization working for racial, social, and economic justice,” organized for 10 years. Their goal was to eliminate the Oakland Schools Police Department (OSPD), which works exclusively in OUSD schools. On June 24 of this year, Oakland’s School Board voted to dismantle the department when they passed the George Floyd Resolution to Eliminate the OSPD.

With its Phase 1 plan, BOP is preparing for when OSPD is completely eliminated and in-person schooling starts. The plan outlines alternatives to police intervention for most behavioral issues that result in school settings. OUSD teachers, union representatives, principals, school administrators and public health experts helped to design it. Part of the plan proposes that mental health professionals deal with mental health issues instead of police.

In anticipation of Wednesday’s vote, BOP organized a week of action, calling on the community to post videos on social media in support of police-free schools, contact board members directly to encourage them to support the safety plan, and prepare public comments for the meeting. During the meeting, community members spoke out in support of BOP’s plan.

BOP is happy that Phase 1 of their safety plan has been adopted by the Board but wants OUSD to remove the remaining OSPD officers and the Chief as soon as possible, as the District has not stuck to the original timeline for police removal that the George Floyd Resolution originally set.

“The goal is to have police off campus,” said BOP Organizing Director Jessica Black. “But we feel the community was undermined because they were supposed to be out now, not later.”

OUSD has extended OSPD Chief Jeff Godown’s contract by 90 days. OSPD officer’s contracts are set to expire on January 11, 2021. Through the George Floyd Resolution, the Board instructed OUSD to terminate these positions by December 31 of this year.

In an interview with The Oakland Post, District 5 Board Director Roseann Torres, who helped write the George Floyd Resolution, said directly terminating OSPD officers and the chief were “not within the board’s purview” as the terminations require action from OUSD, not the board. Torres speculated that the process has been delayed by the pandemic.

The District said it needs more time to eliminate the department.

“The District is well on the way to eliminating the police department, but there are parameters within which the District must work to complete this task,” said OUSD Communications Director John Sasaki when asked why OSPD has not been shut down yet. “A police department, even one the relatively small size of the Oakland Schools Police Department, cannot be shut down overnight.”

BOP also wants more community involvement in dealing with safety in schools, including input from teachers and students and plans to include that involvement in Phase 2 of their safety plan.

“Instead of top down we need [school safety] to come from the bottom up,” said Black. “We are the ones who keep us safe, and it’s going to take the parents, the students, the teachers, the community members and administrators to make it work.”