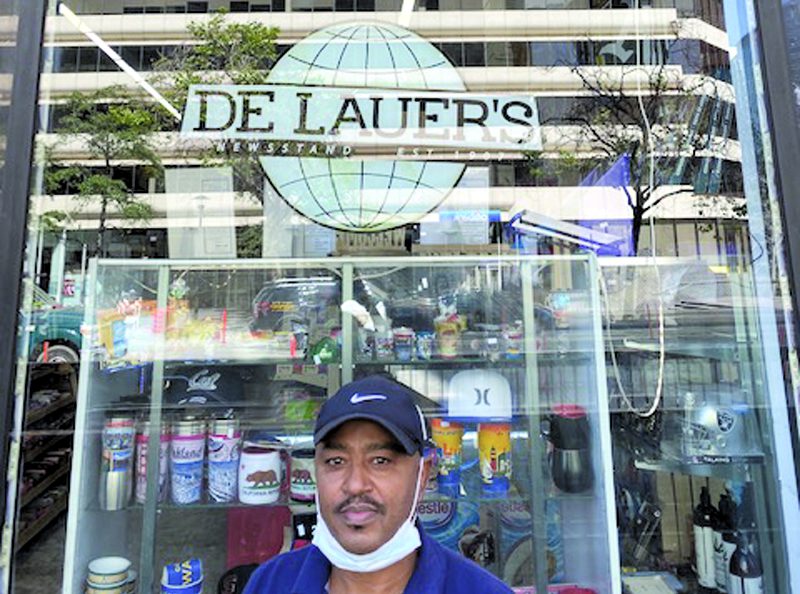 For 113 years, DeLauer’s Super Newsstand, located at 1310 Broadway in downtown Oakland has been a mainstay in the community, providing Oakland residents with news from around the globe.  The newsstand is, unofficially, a historical landmark in the city.

DeLauer’s was originally owned and operated by Charles DeLauer, whose father started the enterprise selling papers from small wagons in 1907. The once 24-hour-a-day store, which sells newspapers and magazines from around the world, almost shut down until its current owner, Ethiopian native Fasil Lemma, bought the newsstand from DeLauer in 2008.

Today, the newsstand still thrives as a bustling business though it has been plagued with vagrants, the unhoused and loiterers who mingle outside the establishment during business hours.

This has become a concern for Oakland’s Ambassador Program whose goal is to keep the city clean and free from anything that detracts Oakland from being a safe and healthy environment. The Ambassador program has frequently targeted DeLauer’s as a nuisance although the newsstand is not the problem.

“Operating a safe and healthy business in the heart of downtown Oakland can be challenging when you have people who violate health and safety codes,” said Lemma. ”We try and do the right thing by assisting not only our customers but those who also congregate outside our store.

“Our employees cater to those individuals who seek assistance with food and goods that aren’t even purchased here and we still provide services like containers and hot water for things such as noodles that are bought elsewhere. We don’t turn anyone away that needs help with procuring food and assistance with items that aren’t even purchased here. We frequently allow some people to come in and use or restrooms.”

“We have been blessed with the support from individuals like Oakland Mayor Libby Schaff, City Councilmember Larry Reid, city employee Kiera Williams and our landlords, Ben and Richard Weinstein,” added Lemma. “I’m very, very thankful for the help they have provided in assisting me with operating the newsstand.”

Lemma recently received recognition from the Alameda Health Department commending him for not selling tobacco products to a minor who was sent to the newsstand as a decoy.

Reid noted that Lemma has been a friend for a number of years. “Fasil has run a first-class, small business for years,” said Reid. “He has always done the right thing with his customers and he always gives back to the community. What goes on outside of his establishment is something that he has no control over. He is not the one to determine who can and cannot congregate outside of his establishment.”

“It is the responsibility of the Oakland Police (OPD) Department to increase their efforts to ensure his business can operate in a safe environment, free from hassles from other departments, added Reid.”

“The OPD should increase its walk patrols in the area to help deter any inappropriate activity being done in front of the newsstand,” he said. More aggressive patrolling would help to improve the health and safety of many downtown workers that frequent DeLauer’s.”