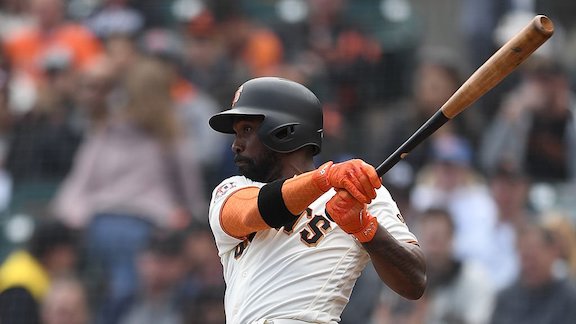 San Francisco, CA – It was the perfect ending to a great day of baseball.  The remaining fans who stayed during the extra innings, rose to their feet when Andrew McCutchen was at-bat with two on and two outs.  Down by one, McCutchen hit his first walk-off homer of the season and it couldn’t have come at a better time.

The Giants 7-5 victory over the Los Angeles Dodgers was one for the history books.  A phenomenal job by the bullpen and a great offensive effort from all.  San Francisco continued to break out the bats. McCutchen recorded a career-best six hit game capped off with a three-run walk-off homer.

“I’ve gotten six hits in a couple of games.  Like six in a row but never in one game,” said McCutchen.  “Its been awhile for sure.  I can’t even remember my last five-hit game.”

McCutchen recored his last five-hit game on May 14, 2010 against the Chicago Cubs.  The Giants began the 14th inning down by one.  Pinch-hitter Kelby Tomlinson leadoff the frame with a single to right field.  Joe Panik followed with a single to right as well, and McCutchen’s first home run of the season was a fly ball to center.

The Dodgers led in the top of the inning with three singles back-to-back.  Yasiel Puig singled to leadoff the frame.  Cody Bellinger followed with a single and Logan Forsythe’s RBI single drove in Puig to make it a 5-4 game.

Roberto Gomez retired the next three batters including pinch-hitter Clayton Kershaw who struck out swinging.  You have to tip your hat to three rookie relievers that finished the final five innings.  Pierce Johnson, Reyes Moronta and Gomez remained poised in what felt like a playoff game.

“My good pitches were a slider and curve ball,” said Moronta.  “Big opportunity for me tonight and I felt really good pitching.”

The Giants jumped out aggressively early, Panik hit a bloop single over shortstop Corey Seager in the first.  McCutchen drove in Panik with a RBI double making it a 1-0 game.  By the third LA tied the game 1-1 after Chris Taylor’s RBI single scored in Chase Utley.  McCutchen’s next hit was a leadoff single in the fourth followed by Buster Posey two-run homer extending San Francisco’s lead 3-1.

The Dodgers clapped back with two runs in the 6th and knocked out Chris Stratton after five frames.  The Giants went with their bullpen the rest of the way.  Stratton finished with four hits, three runs (two earned), four walks and three strikeouts.  His last walk proved costly, Seager leadoff the frame with a single followed by a free pass to Puig.

Josh Osich who replaced Stratton, forced Bellinger to pop out and walked Forsythe.  Cory Gearrin replaced Osich, and a passed ball by Posey allowed Seager to score making it a 3-2 game.  Enrique Hernandez grounded out to shortstop Brandon Crawford and Puig scored the tying run making it 3-3.  The Giants were able to stay alive when Brandon Belt’s RBI double put San Francisco up 4-3.

But just like any series between these two teams, it’s always a battle until the very end.  Utley began the seventh with a solo shot to right field tying the game again for the third time.  For the next four frames it was a defensive game.  Moronta then got himself out of a jam in the 12th inning.

After putting two on, Bochy came to the mound and told him to intentionally walk Hernandez.  Moronta feeling confident after Bochy’s pep talk, forced pinch-hitter Hyun-Jin Ryu to to strike out to end the inning.  The Giants blew an opportunity bottom of the frame when they failed to drive in a run with two on.  But that didn’t matter in the end.

“It’s one of these Giant-Dodger games that will be talked about, that’s how good of a game that was,” said Bochy.  “Entertaining.  You saw everything.”