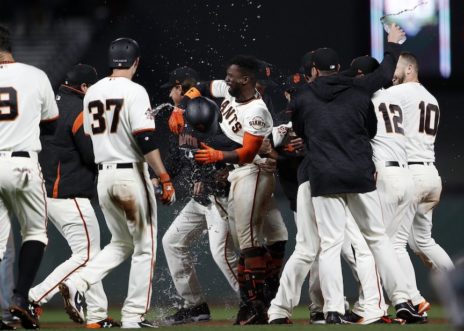 San Francisco, CA – If this is what one calls getting warmed up, Andrew McCutchen is the answer.  McCutchen recorded his second walk-off hit in just five days.  This time the bases were loaded, McCutchen swung on the first pitch and lined a single to center field for the win.

Last Saturday McCutchen’s three-run homer lifted the Giants over the Dodgers.  Tonight, was another heroic performance by McCutchen who helped San Francisco beat the Arizona Diamondbacks 5-4.  Giants manager Bruce Bochy had nothing but praise for his veteran player.

Paul Goldschmidt tied the game 4-4 in the ninth when he went yard with a solo home run off Hunter Strickland.  Reliever Jorge De La Rosa gave up three walks including one intentional with only one out.  With the bases loaded, it was another opportunity for McCutchen to close out the game and he didn’t disappoint.

Patrick Corbin didn’t make it easy.  The southpaw was a gem on the mound pitching a strong 5.1 innings before San Francisco rallied back.  Corbin had nine strikeouts before he began to unravel in the sixth. Gorkys Hernandez leadoff the inning with a single and Austin Jackson followed with a base hit.  Brandon Belt also singled to load the bases with no outs.

But it was the walk to McCutchen that walked in the Giants first run.  Buster Posey’s sacrifice fly to drove in Jackson tying the game 2-2.  Another walk to Evan Longoria kept San Francisco alive but it was Hunter Pence’s sacrifice fly that put the Giants ahead 3-2.  Back-to-back doubles from Jarrod Dyson and Ketel Marte tied the game 3-3 again.

Thanks to a throwing error in the eighth, San Francisco was up by one again.  McCutchen got his second walk of the day, and Posey followed with a single.  Evan Longoria struck out swinging and McCutchen stole second base, a throwing error by catcher, Alex Avila allowed McCutchen to score making it a 4-3 game.

“He’s clutch, man,” Tyler Beede said.  “He’s earned that name over the past five days you know so just incredible.  For this to be my first major Major League game and for him to end it in walk-off fashion, it’s incredible.”

Beede made his MLB debut tonight, thought it was not his best game, his teammates backed him for a “no-decision”.  Beede gave up five walks, three hits, two runs in four frames.  His walk to Marte sparked two quick runs in the first.  Beede was called up from Triple-A after Johnny Cuteo injured his ankle adding him to the long list of injured pitchers for the Giants.