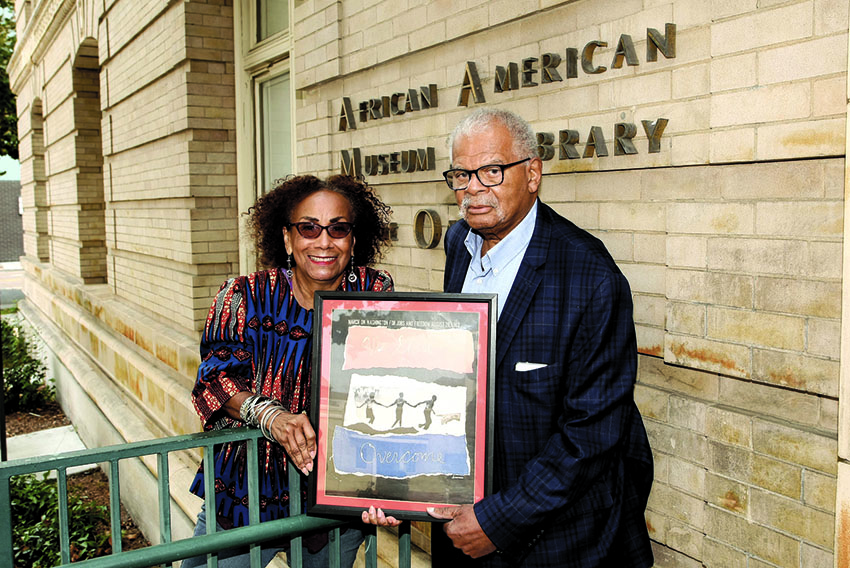 As the 2020 renewal of the 1963 March on Washington was taking place in the nation’s capital it was also observed in many communities around the country. Some of the original participants who live in Oakland are hopeful that the movement for voting rights is continuing.

Former Berkeley Mayor Gus Newport and former Oakland Pri­vate Industry Council Execu­tive Director Gay Plair Cobb both attended the August 28, 1963, March on Wash­ington for Jobs and Freedom.  Newport had traveled all night on a bus from his native Roch­ester, N.Y., where he led the largest civil rights organiza­tion and Cobb, an organizer at Queens College, had taken a bus at dawn from New York City.

While on the steps of the African American Museum and Library in Oak­land earlier this week they recalled how a wave of people from all over the country had traveled to Washington, D.C. 57 years ago to voice their support for more jobs and equality.

Both felt the accomplishments of the Civil Rights Movement—particularly the Civil Rights Act of 1964 and the Voting Rights Act of 1965—has been profoundly undermined by the U.S. Supreme Court. They both said the U.S. Congress and the president should enact and sign legislation to restore the voting protections for minorities and vulnerable communities in some states.

They also said the overt racism expressed by Pres. Donald Trump and his administration have caused regression in race relations.

Brotherhood of Sleeping Car Porters and many unions together to push for equality, fairness, and opportunity.

Cobb and Newport, both former elected officials, said they now are actively organizing and counseling with the next generation of activists and political leaders. “The struggle continues,” said Newport.

Now, young people across the country seek Newport’s counsel via zoom meetings. He reminds them that the tactic of march­ing in the 1960s was to achieve certain goals that the various organizations had determined before the marches took place. He counseled that, “Spontaneous marches also had their place, but failure to orga­nize creates enemies because disruptors get the opportunity to cause harm to business owners who don’t deserve it.”

Nevertheless, the key, Cobb said, is voting. “We know some people have lost faith.”

She expressed the important historical context of the work done in the past would eventually lead to the election of the first Black president of the U.S. as being something worth remembering.

“The challenge is to honor that history, remember it, not dismiss it,” she said. “Learn from it.”    Both hoped that the recent 57th anniversary March on Washington led by Rev. Al Sharpton’s National Action Network and Martin Luther King III would inspire the communities of color to vote in larger numbers than ever before.

Sharpton announced the 2020 march with an altogether different rallying cry – police brutality – and yet voting became a common theme, just as it had been in 1963.

The now-iconic photos of that day in 1963 illustrate a time profoundly different as organizers cope with the reality of the pandemic. With African Americans and other minorities suffering disproportionately from the ef­fects of the COVID-19 virus, both in numbers who contract disease and succumb to it, re­strictions were optimally put in place to protect attendees. All who entered the desig­nated areas of the rally were given masks and temperatures were taken.

The next day on the National Mall, speakers included Wanda Cooper-Jones, the mother of Ahmaud Arbery, a 25-year-old Black man chased and shot to death while jog­ging in Glynn County, Geor­gia and Philonise Floyd, the brother of George Floyd, who died under the knee of a Minneapolis, Minnesota police officer. That choking death captured on video by a 17-year-old Black girl, sparked a global reaction and outcry for justice.

Floyd said, “I’m marching for George, for Breonna (Taylor), for Ah­maud, for Jacob, for Pamela Turner, for Michael Brown — Trayvon and anybody else who lost their lives.”

Jacob Blake Sr., the father of Jacob Blake, who was shot in the back by police in Keno­sha, WI, spoke to the crowd as well. “Every Black person in the United States is gonna stand up. We’re tired!” he said. “And we’re not taking it anymore, I ask everyone to stand up. No justice, no peace!”

Letetra Wideman, Jacob Blake Jr.’s sister, said moving­ly “We will not be a footstool to oppression. Black America, I hold you accountable. You must stand. You must fight, but not with violence and chaos — with self-love.”

Martin Luther King Jr.’s granddaughter, Yolanda Renee King spoke as did her father, Martin Luther King III, who closed out the rally. “We’re marching to overcome what my father called the triple evils of poverty, racism, and violence,” he said, listing challenges that disproportion­ately affect Black and Latino communities, including the coronavirus pandemic, unem­ployment, police brutality and attacks on voting rights.”