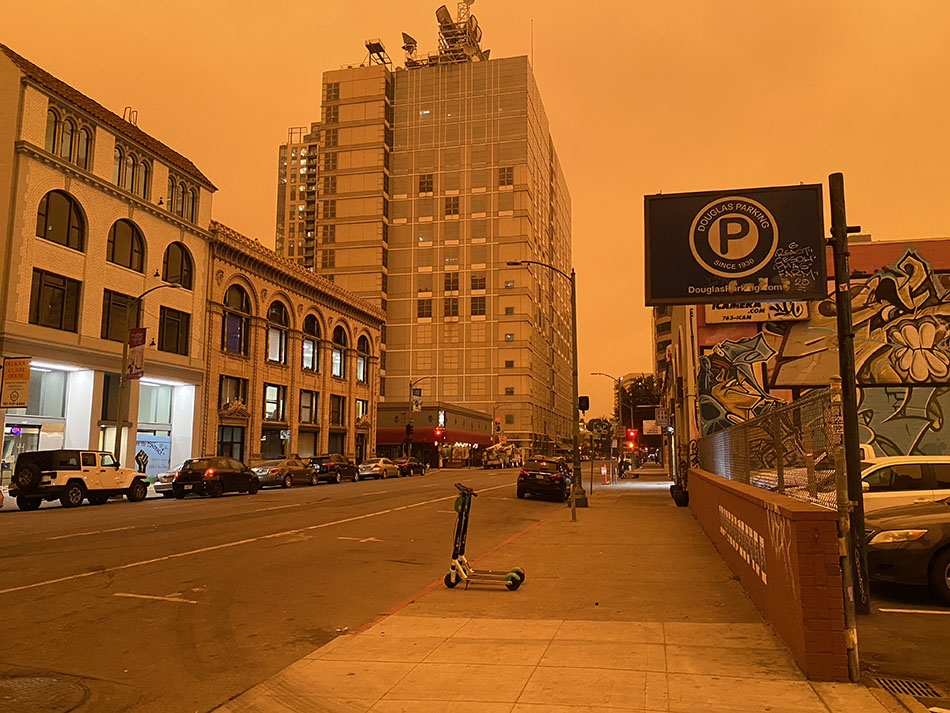 In addition to smoke from the August fires, the Bay Area branch of the National Weather Service noted on Twitter that lower temperatures and weaker winds compared to the last several days are allowing wildfire smoke suspended in the air to fall closer to the ground, contributing to the sky color change.

People all over the Bay Area woke up Wednesday morning to ominous, orange skies. Street lights stayed on long past what should have been daybreak that — under normal circumstances –would have been a clear, sunny day.

The Apocalypse has arrived in Oakland this is Lake Merritt at 10:30 a.m pic.twitter.com/QhovkvhAq7

‘Surreal,’ ‘hell,’ and variants of ‘apocalypse’ were terms that peppered conversations on and off social media.

The cause, as reported by Bay City News, is smoke from the August Complex fires in Mendocino County that settled on top of a marine layer in the Bay Area Wednesday, turning the sky various shades of red and orange.

According to the San Francisco Chronicle, “ . . . [t]he ominous pallor of the skies, experts said, were a product of the plumes of smoke billowing from the historic number of wildfires burning across the state.  Wind conditions overnight pushed smoke into lower elevations, filtering sunlight and producing dark tints of red, orange and gray.  Still, air quality remained mostly unchanged.”

Borrmann said that while the air district extended its Spare the Air alerts through Friday, air quality is not being adversely affected by the smoke because the marine layer is, in effect, insulating low-lying areas.

This writer woke up to ash on my car and lawn and confused about the time of day and why it wasn’t lighter at dawn.  By noon on Wednesday, people were still driving with their headlights on.  Streetlights that turn off at dawn were still illuminated.  People complained of their eyes being irritated.

This writer received a text from a friend, Ange, about “ . . . the impending apocalypse and obvious undercurrent of anxiety” followed by  “ . . . seriously though . . . what is with the sky?”

Jim Tang tweeted: “If you told me that I was actually in hell right now, I would believe you.”

If you told me that I was actually in hell right now, I would believe you. Apocalyptic feel to the sky across the Bay Area right now. pic.twitter.com/iQvVbNTylD

Will Tran of KRON 4 tweeted: “[o]range, dark and ashy bc of wildfires.  I was two days away from my 8th birthday when Mt. St. Helens shook the planet.  I’m from Seattle-Tacoma and I remember the sky looked just like this.”

Absolutely no filter involved here. This is the morning sky over San Francisco at 8am. Orange, dark and ashy bc of wildfires. I was two days away from my 8th birthday when Mt. St. Helens shook the planet. I’m from Seattle-Tacoma and i remember the sky looked just like this. pic.twitter.com/zgOkT2Ou5f

(Mount St Helens is an active volcano in nearly 100 miles south of Seattle, Wash. It had a deadly eruption in 1980.)

News reports discussed how residents of Oakland, San Francisco, and the Bay Area were sharing images of the “apocalyptic morning light” as record heat continues to fuel local fires.

Wildfires are changing the weather of an entire region, meteorologists said. And forecasters don’t know when it will end.

“Fires create their own weather,” National Weather Service meteorologist Roger Gass explained, but usually only on a small scale, in areas close to the flames.

The smoke that upended the Bay Area on Wednesday, though, was coming from hundreds of miles away, according to reports from The East Bay Times. Most of it, Gass said, “was likely from the August Complex Fire in the Mendocino National Forest and the Bear Fire in the western Sierra. Smoke from other fires throughout California, Oregon and Washington was also mixed into the massive layer of haze,” the East Bay Times reported.

“We’re having such a large scope of dense smoke across the Bay Area and the West Coast in general, that it’s actually impacting our weather conditions,” Gass told the East Bay Times. “We’re kind of in uncharted territory right now.”

Meteorologists said that the air quality is not as bad as it appears to be, but that is not reassuring to some.

“I woke to an apocalyptic sky, orange haze elicits a sense of dusk rather than day.  I’m reminded of all the dystopian books I’ve read. I also sense that we are doomed. The world descending into chaos around me” said my wife, Natalie Devora Monifa.

“I think this weather is a ‘no’” added my 19-year-old daughter, Isabella Bolden-Monifa

“Since the beginning of this pandemic, I’ve been feeling as if I was in an apocalypse.  Today’s weather in the Bay Area is ‘outpicturing’ what I’ve been feeling” said another friend, Pamela Grimm.

But for my son, Benjamin Bolden-Monifa, “It’s cool.” My 17-year-old’s favorite color is orange and he wears it daily.