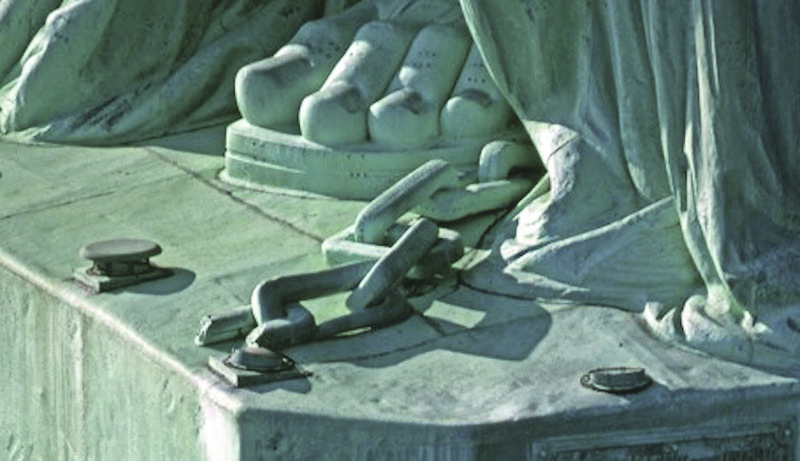 First imagined by the French historian Édouard de Laboulaye in 1865, Lady Liberty was created from a desire to represent an alliance between America and France. Her core meaning was to be a mutual desire for freedom and worldwide liberty. Yet the truth of her arrival to Liberty (then Bedloe’s) Island and what she symbolizes boasts a storied history.

It had been the Union victory in the Civil War and the ideals for freedom held by the U.S. that served as a platform for de Laboulaye to argue: “Honoring the United States would strengthen the cause for democracy in France.” This, coupled with his position of Anti-Slavery Society president, de Laboulaye believed that the passage of the 13th Amendment was a “milestone, and it proved that justice and liberty for all was possible.” De Laboulaye then channeled his love for democracy and freedom into the Statue of Liberty, whose original name was Liberty Enlightening the World.

It is assumed by many that Lady Liberty is an iconic structure designed to welcome immigrants. Buried in history is the fact that she was originally built to mark the celebration of the end of slavery.

In June 1865, Laboulaye organized a meeting of French abolitionists. “They talked about the idea of creating some kind of commemorative gift that would recognize the importance of the liberation of the slaves,” Edward Berenson, a history professor at New York University, said during an interview with The Washington Post. Laboulaye secured the partnership of sculptor Frédéric-Auguste Bartholdi, and the development of ideas began.

Lady Liberty’s original color was that of a new penny; the greenish-blue is a result of years of weathering. The external sculpture is the work of Frederic August Bartholdi, who designed the first model with her right arm raised and illuminating the world with a torch. In her left hand, she holds broken shackles, representing the end of slavery.

Regarding Lady Liberty’s face, some historians theorize that it was adapted from a statue Bartholdi had proposed for another of his works: a statue of an Egyptian woman. The New York Times reported that her look was based on the Roman goddess Libertas.

Americans rejected this model [some historians disagree with this position], so Bartholdi replaced the chains with a tablet inscribed with the Roman numerals for July 4, 1776. The broken chains at her feet however, have remained as a reminder of freedom from oppression and servitude, “But they’re not all that visible,” Berenson said. “One of the first meanings [of Lady Liberty] had to do with abolition, but it’s a meaning that didn’t stick.”

Over the years, historians have presented and disputed countless interpretations of Lady Liberty’s meaning. And still, she remains America’s one-woman welcome committee standing in the Upper New York Bay. But there is one fact on which many people of color agree: Her existence emphasized the bitter ironies of America’s professed identity as a just and free society for all people regardless of race.