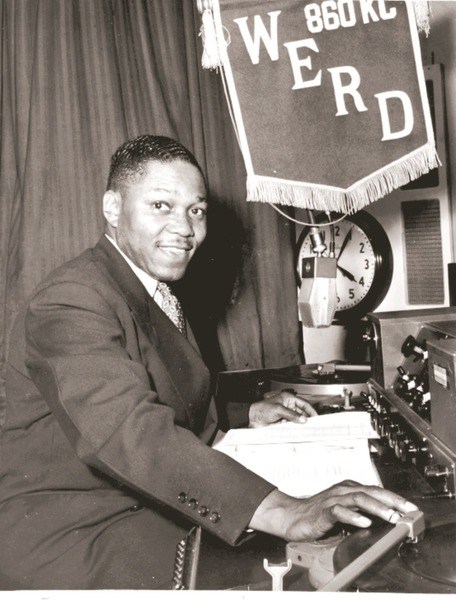 From a small brick building located two blocks from what is now The King Center boomed a voice for Black Atlanta: Jesse B. Blayton Sr. a professor at Clark Atlanta University. It was 1949, and radio was the most popular medium of mass communication for the Black community.

Blayton (1897–1977), wanted to produce on-air shows that blended language, music, politics and culture aimed specifically at Black audiences. So he started WERD and broadcast information relevant to Atlanta’s Black community from sunup ‘til sundown. It was the first radio station owned and operated by an African American in the United States.

Born in Fallis, Okla., Blayton first worked with investors to raise money to start the station. “When that didn’t work out, he went in his pockets … $50,000 later, he started the station [on his own],” said Ricci de Forest, who is continuing the WERD’s legacy, during an interview with National Public Radio.

After Blayton graduated from University of Chicago, he relocated to Atlanta. It was there he established a private accounting practice. After passing the Georgia accounting examination in 1928, he had become the first Black Certified Public Accountant and only the fourth African American nationwide to hold the certification. He later taught accounting at Atlanta University, where he had little success in recruiting Black students for the profession.

Difficulty in recruiting lay in the fact that white-owned accounting firms would not hire Black people. Blayton had the only Black-owned firm in the South; it was small and had few openings. Thus jobs were non-existing. In the 10 years that followed, there were only seven other Blacks in the U.S. who had achieved that accountant status.

At WERD, Blayton pioneered what he called “Negro-appeal music,” which included early versions of rhythm and blues music that could not be found elsewhere on the air. There were other stations broadcasting music for Black audiences, but WERD was the only one that was Black-owned. By 1954, there were approximately 200 Black-oriented radio stations, but fewer than a dozen were owned by Blacks.

The growth of WERD, its roots in the Black community’s history, is storied. The station was instrumental in the Civil Rights Movement. “King wouldn’t have had a radio station to coordinate with the Movement if WERD hadn’t been here,” de Forest said. “Dr. King’s office was on the first floor of the building and he would broadcast from upstairs.” King used his office for the Southern Christian Leadership Conference.

The building in which WERD was located, Prince Hall Mason on Sweet Auburn Avenue, is an original Madame C.J. Walker beauty shop. Today, the space houses a museum dedicated to the station and hosts live performances weekly.

WERD, music and information for the Black community at its best, was sold in 1968 when Blayton retired. He died in 1977 in Atlanta and was inducted into the Radio Hall of Fame in 1995.

De Forest keeps the station alive by broadcasting an online version of WERD.