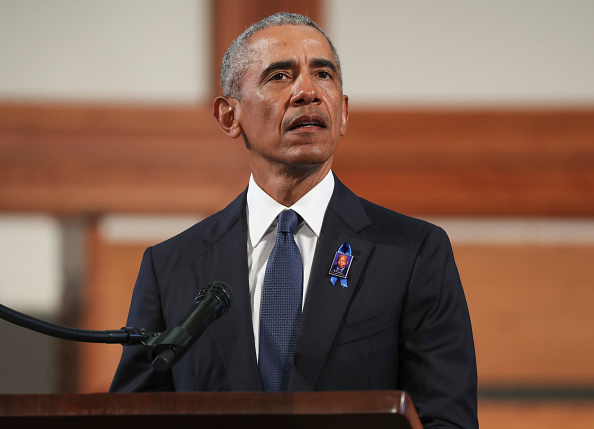 Former US President Barack Obama speaks during the funeral of late Representative and Civil Rights leader John Lewis(D-GA) at the State Capitol in Atlanta, Georgia on July 30, 2020. - Lewis, a 17-term Democratic member of the US House of Representatives from the southern state of Georgia, died of pancreatic cancer on July 17 at the age of 80. (Photo by Alyssa Pointer / POOL / AFP) (Photo by ALYSSA POINTER/POOL/AFP via Getty Images)

Following a week of memorial services and events honoring the life of Rep. John Lewis, the civil rights leader and icon was laid to rest on July 30 after a celebration of life at Atlanta’s Ebenezer Baptist Church.

Following eulogies from former Presidents George W. Bush and William ‘Bill’ Clinton, President Barack Obama delivered a 40-minute long eulogy in which he credited John Lewis for inspiring him from an early age — referencing the words he wrote to the congressman following his election as president, “Because of you, John.”

“What a gift John Lewis was, we are all so lucky to have had him walk with us for a while and show us the way,” said Obama.

Former Atlanta Mayor and close friend of Lewis William Craig Campbell recalled one of his final conversations with the congressman. “In a solemn moment he pulled me closer and he whispered: ‘Everyone has to vote in November, it’s the most important election ever,’” said Campbell “If you truly want to honor this humble hero, make sure that you vote.”

Speaker of the House Nanci Pelosi recalled the moment that a rainbow appeared above Lewis’s body as he lay in state at the U.S Capitol a few days prior.

“There was this double rainbow over the casket,” she said. “We always knew he worked on the side of angels, and now he is with them.”

Following the funeral, Lewis’s casket was transported to South View Cemetary for burial.