Peralta Colleges Chancellor Steps Down, Citing Conflicts with Board of Trustees
Advertisement 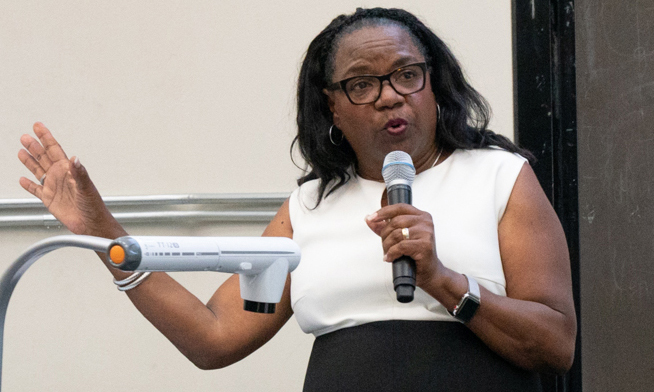 Peralta Colleges Chancellor Regina Stanback Stroud, who has only held the position for nine months, will step down next month amid claims that the Peralta Community College District Board of Trustees undermined her leadership and exhibited racial discrimination against African American staff.

In a scathing resignation letter, Stanback Stroud listed a series of 11 accusations against the Board of Trustees, including, “Hostile conduct towards others and each other,” “violations of confidentiality at closed board meetings,” and “fostering a culture of contempt by modeling disrespect and contempt for executive administration…”

“They are not true,” Trustee Board President Julina Bonilla told the San Francisco Chronicle. She declined to make specific responses as some of Stanback Stroud’s accusations, by law, would require investigations.

Stanback Stroud claimed in her letter that the Board interfered with “fair and effective hiring practices,” as she attempted to fill vacant leadership positions at the district level, and added that the Board colluded with unions “against the interest of the district.”

Peralta Faculty Union President Jennifer Shanoski contradicted Stanback Stroud’s charge of collusion in a statement to the Chronicle. “From a labor perspective, we’ve never had a worse relationship than with this chancellor,” Shanoski said.

According to the Chronicle, the unions had filed a complaint against her over a communications matter and the failure to reveal plans on what employees can expect this fall in light of the COVID-19 pandemic.

Allegations of racist and ‘hostile’ behavior

In a July 19 letter to the California Community Colleges Chancellor’s office in Sacramento from the president of the Peralta Association of African American Affairs (PAAAA) alleged that the board’s actions toward Stanback Stroud were not only abusive but racially motivated.

“We have observed an increase in racism toward the Chancellor by some Board members,” said the letter written by PAAAA President Lawrence VanHook, a Laney College professor, referring to concerns expressed in April.

Stanback Stroud claimed that the Board’s “hostility and contempt toward administration, particularly a pattern practice against African American executive staff” undermined the Chancellor’s authority as outlined in the Accrediting Commission for Community and Junior Colleges.

Thus far, no evidence has been provided to support the allegations.

“We want to assure everyone in the Peralta Community that our organization is strong,” the letter states. “While this situation is not ideal, there is no doubt that we will continue to serve students and our community with dedication and compassion.”

A district in distress

When Stanback Stroud was hired in a unanimous vote from the Board of Trustees in Fall 2019, it was no secret that she faced a district in distress. The former president of Skyline College said she had come out of retirement to work for the Peralta District because she had felt “called” to serve her home community.

White responds with a brief speech, expressing gratitude while symbolically passing on her duties to the new chancellor Regina Stanback Stroud. pic.twitter.com/S0bIhGtrYC

In a now-foreboding statement during the September 2019 Chancellor’s forum, Stanback Stroud said that she hoped to address the internal culture of the colleges and that she was “not willing to be abused,” — emphasizing that she would not tolerate any bullying of any kind, especially towards leadership.

Just a few months earlier, amid widespread concern for the district’s fiscal health, the Board had requested an evaluation from the Fiscal Crisis Management Team (FCMAT). The subsequent report cited an “excessively high” fiscal health risk and referenced a culture of favoritism and miscommunication — among other alarming issues. The California Community College Board of Governors warned that the district could face fiscal insolvency or an emergency takeover from the state if the financial issues were not resolved.

The FCMAT report came as no surprise to some faculty and staff who had long been critical of the district’s administrative culture and budget priorities while declining enrollment and high turnover at the executive level of Peralta College leadership had further impacted public trust and credit rating over the years.

In early 2019, Chancellor Jowell Laguerre prematurely stepped down amid widespread criticism and accusations of fund mismanagement. His contract was due to end in 2020 but the board voted unanimously to accept his “early retirement.”

The district announced July 29  that Vice-Chancellor Carla Walter will serve as acting chancellor while the board undertakes the search for Stanback Stroud’s replacement.  The board aims to appoint an interim chancellor by Oct. 1.

Written by Saskia Hatvany with contribution by Wanda Ravernell.