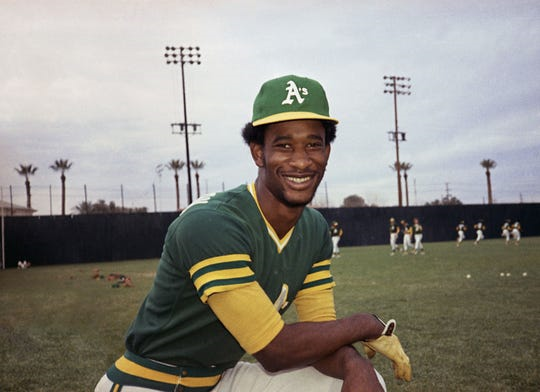 “At age 8, Claudell would hit the ball out of the park on a regular basis, and in high school, anybody that knew Claudell knew he was a better basketball player than he was a baseball player.  He was an all-around athlete at the Olympic level,” Washington said.

Claudell was drafted by the Oakland Athletics as a teenager and debuted at age 19 in the 1974.

Washington remembers that game as if yesterday. “His first game he was up against Gaylord Perry, a highly respected pitcher for the Cleveland Indians.  That night Perry was expected to break a record, which Claudell prevented by hitting a first baseline hit which led to a win for the Oakland A’s and broke Perry’s winning streak.”

Claudell Washington played in the major league for 19 years and could have played longer but wanted to return home to be with his family, regretting not being with his children more.

Washington played with Oakland A’s when they won their second consecutive World Series title.  The next year he batted .308/.345.342 with 10 homers, seven triples and 77 RBI, finishing 14th in the MVP voting as a 20-year-old and earning his first All-Star game selection.

Washington was traded to the Texas Rangers after the 1976 season and played for the Chicago White Sox and New York Mets before joining the Atlanta Braves in 1981.

Washington stayed with the Braves for five seasons before being traded to the New York Yankees during the 1986 season, and finished out the remaining years with the Yankees tying up a career high with a .308 batting averaging in 1988 before joining the California Angels.

Reflecting on his good friend, George Washington said, “As famous and successful as Claudell was, his greatest gift was his sense of humor and his big smile. He lit up a room!”

Related Topics:Claudell Washington
Up Next

Musicians and Entertainers Struggling During COVID-19 Pandemic – Part One