Giants turn tables in seventh with win over Dodgers
Advertisement 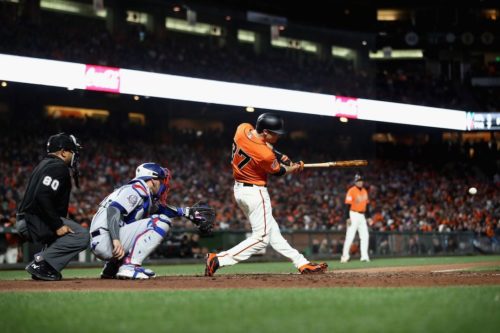 San Francisco, CA – The Los Angeles Dodgers took a dominant lead in the fourth scoring four runs while  knocking out Derek Holland in the process.  But it was Kelby Tomlinson’s pinch-hit double that sparked the comeback in the Giants 6-4 victory over the Dodgers that was unforgettable to say the least.

Pedro Baez stumbled off the mound and scored in a runner on a balk.  We’ve all seen the clumsiness of a few pitchers in our past however, San Francisco turned the tables on the Dodgers when they scored four additional runs in the seventh frame.

Tomlinson tied the game 4-4 with another heroic pinch-hit double off the bench.  Gorkys Hernandez scored on Baez balk to give the Giants a 5-4 lead and Joe Panik’s sacrifice fly drove in the insurance run.  It was an incredible night for hits by San Francisco.

“I looked for something to try and get the ball in the air, Tomlinson said.  “I just try to go up there and compete.  It’s my first at-bat of the day, so you just have to try to figure it out as you go.”

Down 4-2, Brandon Belt leadoff the seventh with a bunt single.  He tried to advance to third on Austin Jackson’s single but was called out.  Brandon Crawford walked with Hernandez driving in Jackson on his single up the middle.  The offense was phenomenal in backing Holland despite a rough start.

“The frustrating part was the walks,” said Holland.  “I let them come back into the game and made it harder for our guys.  That’s not like me.  I earned this spot in spring training, and I’ve got to keep plugging away.  I’m not going to get too caught up in all this stuff because I know what I’m capable of.”

Holland lasted 3.1 innings, gave up four hits, four runs and four walks.  All of his runs came in one frame.  A tough start after both Evan Longoria and Crawford blasted solo home runs in the second frame to give the Giants a 2-0 lead.  That lead was quickly erased in the fourth.

Hyun-Jin Ryu doubled on a sharp line drive down the left field line and cleared the bases scoring in both Puig and Bellinger to take the lead 4-2.  That play ended Holland’s night and the bullpen took over.  Ryu pitched a solid game but was also knocked out after getting hit by Buster Posey’s single in the sixth.

The momentum shifted once Ry was out of the game, he tossed 5.2 innings, surrendered four hits two runs, struck out seven and walked none.  Despite LA’s incredible defense through four frames, the Giants rallied back in the seventh.

Tomorrow’s double header kicks off at 1:05 with Walker Buehler vs Chris Stratton and the second game starting at 7:05 with Alex Wood vs Johnny Cueto.

“Mothers of the NBA”  Features Wanda Durant at Intel