Giants back to .500 with win over D-backs
Advertisement 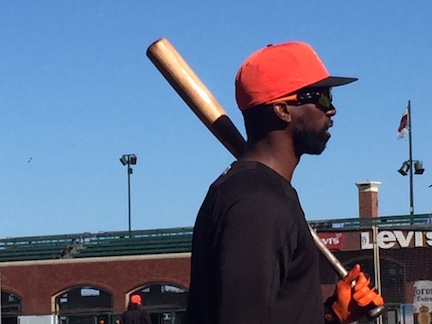 San Francisco, CA – One game and a half games out of first place in the National League West, is a good way to welcome back Madison Bumgarner.  Tomorrow the southpaw will take the mound for his first start of the season.

Nothing more special than coming back to a team that’s winning.  Four home runs capped of a barrage of seven hits that came in one frame.  Coming off a sweep, the Giants continued their winning streak with a 10-3 victory over the Arizona Diamondbacks.

“We missed him, no question about it,” manager Bruce Bochy said.  “He’s excited about coming back.  We’re a better club with him.  That really improves this rotation.  It’s good to get our guys back.”

For the first time this season, both Andrew McCutchen and Brandon Crawford hit back-to-back home runs to start the fourth.   McCutchen led off the inning with a solo shot to cut the lead in half.  Crawford followed with his own solo home run and tied the game 2-2.

Pablo Sandoval followed with a single while Zack Godley gave up walks to both Hunter Pence and Gorkys Hernandez to load the bases.  Pinch-hitter Alen Hanson doubled driving in both Sandoval and Pence to extend their lead 4-2.  Joe Panik was hit by pitch and that knocked Godley out of the game.

“He got clipped for a couple back-to-back home runs and then just lost maybe a little bit of command,” D-backs manager Torey Lovullo said.  “He started to fall behind hitters and there was a run of batters where there were several base runners on.  The big hit was Hanson.  I thought that was a mistake over the plate with two strikes.  Just a very unfortunate timing.”

A wild pitch by Fernando Salas and Hernandez scored.  Buster Posey got in on the action and hit a RBI double scoring in both Hanson and Panik making it a 7-2 game.  The hits kept coming, Sandoval led off the fifth with a solo home run to extend San Francisco’s lead 8-2.

Crawford led off the seventh with a double and Sandoval drove him in with his third hit of the game.  Sandoval recorded a three-hit game tonight, he homered and hit two RBI singles.  Pinch-hitter Nick Hundley provided the insurance run when he homered in the eighth.

“When asked was the team having fun, Sandoval responded, “It’s the Giants way.”

“That’s the good thing; we took advantage in that inning,” he explained.  “McCutchen hit that home run and after that Crawford, and then we’re working and working every pitch to score more.  After they scored two, McCutchen really awakened us.”

What seemed like a slow start escalated quickly.  A pitcher’s duel through three fames ended with Arizona scoring two runs at the top of the fourth.  Paul Goldschmidt singled on a sharp line drive to left field.  Jake Lamb walked and Ketel Marte cleared the bases with a double to left field driving in Goldschmidt and Lamb to make it a 2-0 game.

However, the power hitting from the Giants dominated the D-backs who currently hold first place in the NL West.  Back to .500 San Francisco, Arizona was no match for the surging Giants.   continues their winning streak when their ace takes the mound tomorrow.  Bumgarner who has been out since March 23rd with a broken pinkie on his left hand.

Notes – The Giants selected catcher Joey Bart (Georgia Tech) with their first round selection (2nd overall) in the 2018 MLB Draft.  Standing 6’3, 225 pounds Bart is the highest draft selection the Giants have made since they picked first baseman Will Clark out of Mississippi State University with the second overall pick in 1985.

“The emotions were definitely high, there was a lot of uncertainty there especially close to the pick.  The pick was already in and I was like ‘well dang, I hope the Giants pick me, I really want to be there.”

At the conclusion of the regular season, Bart was named the ACC Player of the Year–the first Georgia Tech player to win it since Mark Texeira in 2000.  He was also named a first team All-American, the ACC Defensive Player of the Year, and he was an all-ACC first team selection. With winners still to be announced, Bart is a semifinalist for the Golden Spikes Award, the Dick Howser Trophy and the Johnny Bench Award.

“It was unreal to workout at AT&T Park, the wind and air is so much cooler.  To feel that thin air compared to here in Atlanta.  Its such a different feeling, I enjoyed hitting out there, it was so much fun.”