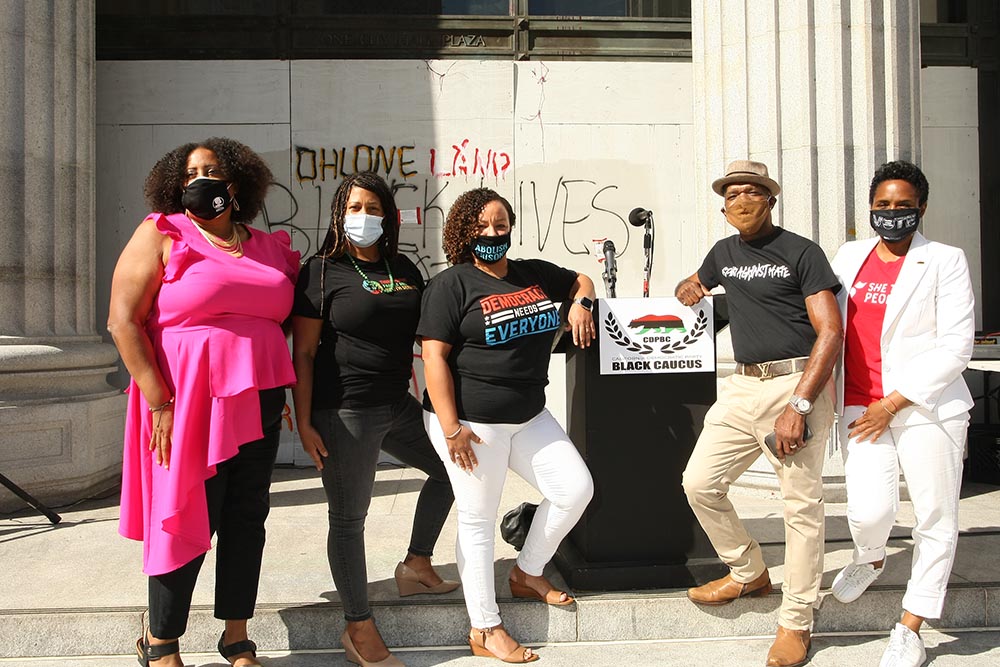 Left to right: Barisha Spriggs, Ca Democratic State Central Committee Delegate; Fumie Stewart, PTA member Rosa Parks Elementary (AA Parenting Advisory Committee Chair; Shay Franco-Clausen, (Prop 17 Campaign Manager); Jesse Brooks, Community Advocate (AIDS Healthcare Foundation Mobilizer); and Kimberly Ellis, California Democratic Party Black Caucus Representative. Photo by Auintard Henderson.
The California Democratic Party Black Caucus hosted statewide press conferences simultaneously across four locations on Thursday to call on Black Californians to support ballot initiatives on the November ballot. The press conferences were held in Oakland, Sacramento, Los Angeles, and San Diego. Speakers addressed the direct benefits each initiative will have on the Black California community.
“In just 11 days we will have the most consequential elections of our lifetime, and we cannot afford to get it wrong”, said Kimberly Ellis, who is a progressive Activist, and leader of the California Democratic Party Black Caucus. Ellis opened the press conference calling out the names of Blacks slain by police. She then mentioned initiatives into each measure that the Black voters needed to pay special attention to.  Ellis called on the Black community to vote for ballot initiatives 15, 16, 17 and 21, on the November 3rd ballot.
Prop 15 will close the loophole of Prop 13, which was passed in 1978 and has siphoned away hundreds of billions of dollars in funding from public schools. Fumie Stewart a mother and Chair of Oakland’s African American Advisory Committee, says “the proposition will help fill gaps needed to fund our needed public schools”.
“Prop 16 will end California’s ban on affirmative action and will level the playing field for Black people,” says Barisha Spriggs, who is a delegate of California’s Democratic Central Committee.
Yes, on prop 17 was addressed by Shay Franco-Clausen who is the campaign manager and a formerly incarcerated person herself. “It’s time to reverse and dismantle Jim crow laws that are still present in California. The proposition will restore voting rights to 50,000 Californians who have completed their prison terms and allow them to participate in our democracy.
“Yes, on Prop 21 expands California’s rent control addressing gentrification and displacement of our community”, said Jesse Brooks, a native Oaklander who has witnessed the growing homeless community. “With expanding rent control, it will enable families the ability of affordable rents and therefore reducing evictions and displacement”, Brooks said.
“Right now, voters are choosing whether Black families can stay in their homes, have equal opportunities for work and school and whether children will get the education they need. It is in our hands and within our power, Brooks continued.
Related Topics:Barisha SpriggsChair of Oakland’s African American Advisory CommitteeFumie StewartJesse BrooksKimberly EllisProp 13Prop 15Shay Franco-ClausenThe California Democratic Party Black Caucus
Up Next