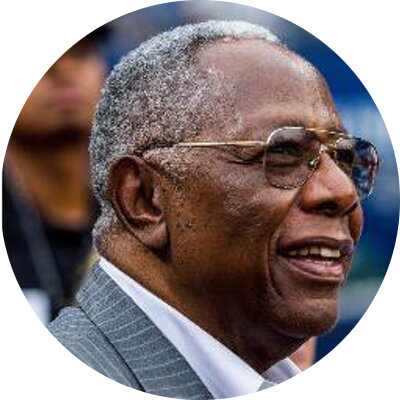 He was lauded for this achievement, breaking a record long held by Ruth, a beloved figure before professional baseball was integrated. Aaron received a plaque from the U.S. Postal Service for receiving more mail, 930,000 pieces than any other non-politician after breaking the homerun record.  A great deal of it was hate mail. Aaron experienced racism and segregation throughout his life.

His baseball awards were numerous and he was inducted intro the Baseball Hall of Fame in 1982 on the first ballot.

San Francisco Giants Barry Bonds subsequently broke Aaron’s home run record in 2007 with an asterisk because of allegations of hhis steroid use.

After retiring from baseball Aaron held positions in the front office of the Atlanta Braves.  He was one of the first people of color to hold an upper management position in Major League Baseball.

He published his autobiography in 1990, “I Had a Hammer” both a play on his nickname, “Hammerin’ Hank” or “The Hammer” and a nod to the folk song, “If I Had a Hammer”.

Hip-Hop artist M.C. Hammer got his nickname because folks thought he looked like Hank Aaron.

In 2002 Aaron was awarded the Presidential Medal of Freedom.

A memorial service will be held on January 26 and streamed on AJC.com at 1pm EST.  Former President Bill Clinton and former Major League Baseball Commissioner Bud Selig are scheduled to attend the funeral.

His private funeral will be held on January 27 at Friendship Baptist Church in Atlanta and burial at South-View Cemetery.

According to a statement from the Atlanta Braves he “passed away peacefully in his sleep.”

Aaron publicly received a first dose of the coronavirus vaccine on January 5, 2021 along with Andrew Young, 88.

On social media he said “I was proud to get the COVID-19 vaccine earlier today at Morehouse School of Medicine.  I hope you do the same!”

Aaron is survived by his second wife, Billye, and by five children:  Gaile, Hank Jr., Larry, Dorinda, and Ceci.

Wikipedia, The New York Times, The Guardian, and People Magazine were sources for this report.