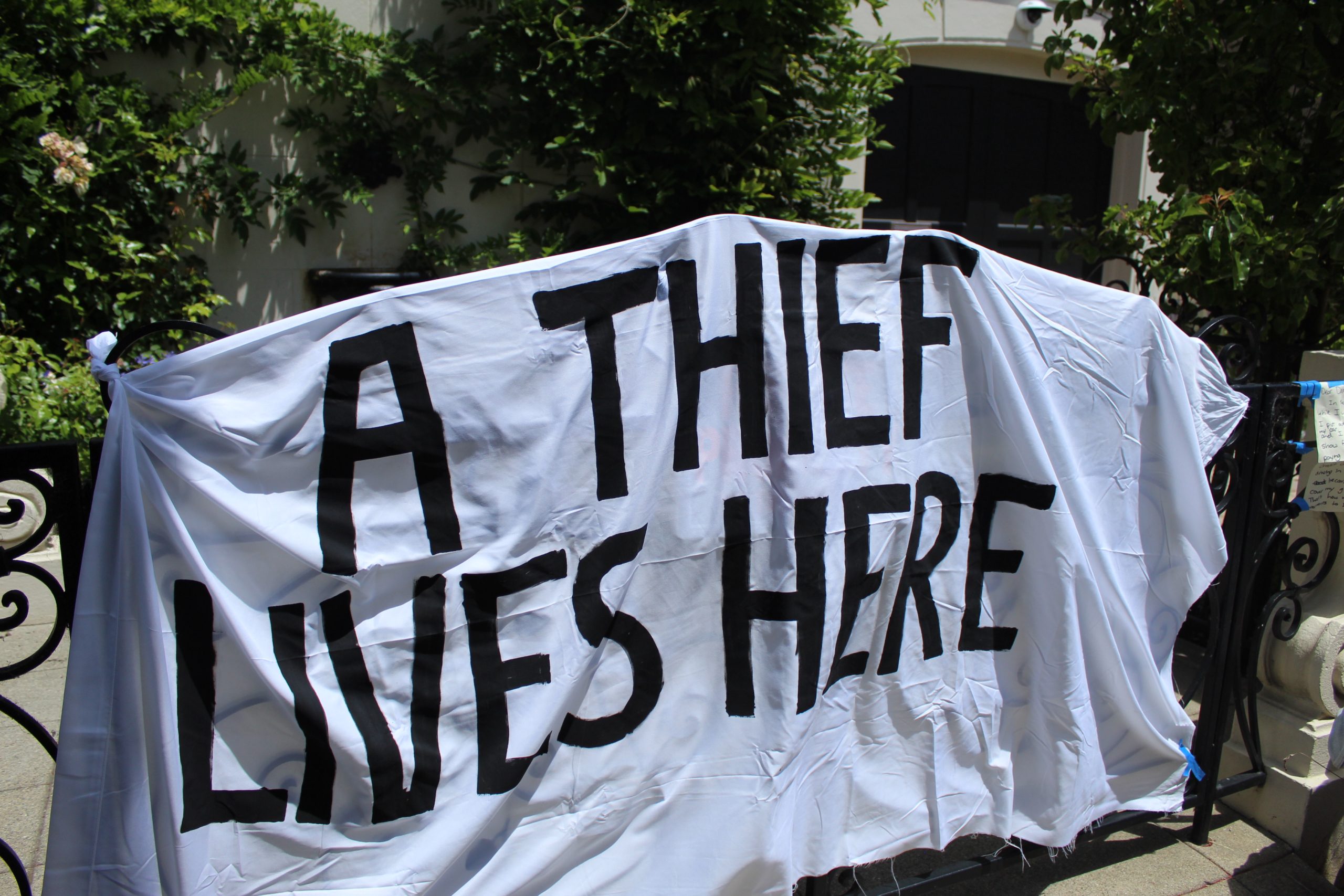 A Caravan of 100 app workers organized with “We Drive Progress” and “Gig Workers Rising” protested outside of Uber CEO Dara Khosrowshahi’s $16.5 million mansion in Pacific Heights in San Francisco on June 24, 2020.

The main issue, according to the organizers, is the misclassification of workers as independent contractors.

Banners conveyed their messages — “A thief lives here” and “Drop the ballot measure.” The latter refers to an initiative to oppose California’s AB 5, a statute that went into effect last year that classifies gig workers as employees and entitles them to health and unemployment insurance and other benefits for worker rights, well-being and safety.

Drivers also left copies of their bills and itemized their loss of benefits since they are not classified as employees.

On Juneteenth, via Medium, the workers issued an open letter to gig companies (Uber, Lyft, DoorDash, Instacart, Postmates and others) regarding Black Lives Matter:

“We are the workers who power the core of your businesses and we write in response to your recent comments on the Black Lives Matter movement. Your statements have included various platitudes about your commitment to Racial Justice and the Black community. We are not fooled. Your lip service in support of Black Lives is completely hollow, created by well-paid public relations teams, and absent any promise of real change.

“Racial justice is economic justice. The conditions that make police killings of Black people possible and inevitable are the same conditions that make the exploitation of Black and Brown workers possible and inevitable. We reject your attempts to separate racial justice from economic justice and we see it as an attempt to dodge your responsibility for the exploitation of your Black and Brown workers every day.

At the onset of the COVID-19 pandemic, when gig workers “attempted to secure masks, hand sanitizer, paid sick-time off, unemployment wages, and other protective measures we found obstacles, opaque processes, and hand-wringing. We had to turn to outside organizations — and each other — for safety during the pandemic. Where were you then?

“We demand that you drop your ballot measure. By moving forward with your ballot measure to exempt yourselves from AB 5, you are not only sidestepping democracy, you are further ensuring that your workers will be kept in poverty with no protections, no benefits, no recourse and no voice.

Other demands are for a living wage, meaningful representation at work, benefits like paid sick leave, unemployment insurance, workers’ compensation and more. A recent study showed that within the Uber and Lyft algorithms is an upcharge for trips to non-white neighborhoods.

The letter has been signed by over 500 gig works and continues to grow.

The first signature on the letter is that of Minister Cherri Murphy, a social justice minister. Murphy, who was at the protest, notes that 70% of the gig drivers are people of color and 50% are immigrants. She echoed the need to drop the ballot measure.

Murphy underscored the fact that “racial justice is economic justice” and mentioned the various injunctions to get the gig companies into compliance with AB 5.

Mekela Edwards, a driver who participated in the Caravan, says she reached out to Rep. Barbara Lee’s office when she had trouble filing for unemployment insurance as a gig worker. She has also applied to Uber, who initially said they would support drivers during COVID-19, but has not heard back from them.