Raiders upset Steelers with late comeback in the fourth
Advertisement 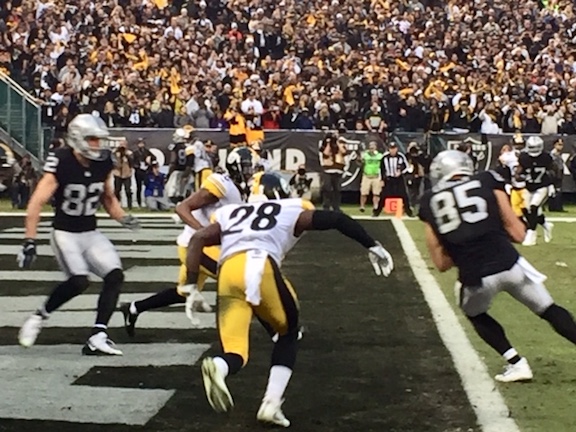 Oakland, CA – A wild finish late in the fourth trumped Ben Roethlisberger’s return.  Derek Carr threw a touchdown pass to Derek Carrier with 21 seconds left in regulation.  Chris Boswell missed two field goals including a 40-yard attempt that would’ve tied the game.
A botched filed goal was not something anyone expected to end the game but credit the Raiders defense for blocking the kick to record their third win of the season.  Oakland’s 24-21 victory over the Pittsburg Steelers was everything and more. Today’s game was probably the best performance of the season.
“Right now we’re just trying to take it one week at a time and end everybody’s season who we face,” said Arden Key whose sack on Joshua Dobbs was overturned.  “We clicked today on all cylinders, from the front to the back end on defense.”
Over the past two weeks the Raiders have been playing better football.  But today the defense was the key in keeping the Steelers offense from finding a good rhythm.  After a scoreless third quarter for both teams, Carr found Lee Smith in the end zone for a 3-yard touchdown.  That gave Oakland a 17-14 lead with 5:20 left in the fourth quarter.
At the 5 minute mark, Roethlisberger entered the game.  Pittsburg’s starting quarterback was ruled out with a rib injury during halftime and Dobbs replaced him at the start of the third.  A few Raider penalties later Roethlisberger connected with JuJu Smith-Schuster for a 1-yard touchdown pass giving the Steelers a 21-17 lead.
“As soon as that play was called, DC and I just smiled at each other because we had been working that for a while,” said Carrier.  “It was exciting – just in terms of what we have been preaching as a team is resiliency.  We definitely faced some adversity this year and just finishing strong and that’s exactly what we did today.”
It’s been a long time since Carr displayed heroics late in the game.  Carr went deep to Seth Roberts for 39 yards with under 21 seconds on the clock.  Unable to move the ball successfully Oakland found themselves with not many options left.  The next play shocked the sellout crowd and stunned Pittsburg fans.  On fourth and goal Carr found the backup tight end inches away from the end zone and threw a 6-yard pass for the touchdown.
On fourth and goal Carr found the backup tight end inches away from the end zone and threw a 6-yard pass for the touchdown.  Carrier and his teammates celebrated as if they won a playoff game.  It didn’t matter that the Raiders are now tied with the San Francisco 49ers and the Arizona Cardinals for the worse record in the NFL.  Today they are winners and that’s all that mattered.
Jon Gruden on today’s win and final play:

The Steelers didn’t panic, 15 seconds on the clock and they knew exactly what to do.  Roethlisberger threw a short pass to James Washington who then tossed a lateral to Smith-Schuster who rushed for 43 yards.  That setup Boswell’s 40-yard field goal attempt.  You could hear a pen drop in the stadium.  But thanks to the Raiders defense a block field goal was the game-winning play.
Another impressive start for Oakland, Carr led his offense with ease on opening drive that culminated in a 1-yard touchdown.  The Raiders used the passing game to gain yards and finished with Doug Martin leaping into the end zone.  Carr connected with Jared Cook twice for 30 yards and 19 yards.
Jared Cook on the win and Roethlisberger’s return:

The Steelers went scoreless in the first quarter but they started off the second tying the game 7-7.  Stevan Ridley rushed up the middle for the 2-yard touchdown.  The Raiders clapped back with a 44-yard field goal from Daniel Carlson making it a 10-7 game.  But falling back into bad habits Oakland racked up 30 yards worth of penalties on one drive.  A rushing sack on Rosethlisberger from Clinton McDonald for a 7 yard loss forced Chris Boswell to kick a 39-yard field goal that he missed.
Roethlisberger made up for it and moved his offense downfield quickly with .25 seconds remaining in the first half.  Using two timeouts, and still unable to get into the end zone Roesthlisberger found Smith-Schuster who leaped in the air for the 1-yard pass landing on his feet before falling out of bounds.  Pittsburg challenged the call that he was in bounds for the touchdown.  The call was overturned and the Steelers regained the lead 14-10 to end the half.
Carr untouched in the third lost his grip on the ball and fumbled giving Pittsburg the ball with less than a minute left in the quarter.  Not long after Carr’s disastrous throw, Dobbs was sacked by Key who forced Dobbs to fumble but the call was ruled an incomplete pass.  Gruden challenged the play, and after further review the call stood as a fumble.  That was a huge blow to the Raiders as Gruden used his last challenge.
“I think we’ve been able to show our team that our relationship, this system — we’ve tried to sell it as hard as we both can,” said Carr.  “We knew it was going to be a process.  We didn’t know stat-wise how it was going to start out.  It would just take time for people to see it the way we see it.  It feels good because it puts a stamp on it.
Man, this is my second-favorite win ever.”

Junior Warriors Basketball is Back