'We Are Intelligent'
Advertisement

LAFAYETTE—The excitement in Marjorie Coulanges’s voice is unmistakable. For two years, her son Nicholas has lived three states away, attending a small, private academy. A week before Christmas 2019, Coulanges is awaiting her son’s visit, full of smiles, confident in his academic and social growth. She said this growth was not happening in the Miami, Florida, high school he attended before moving to T.M. Landry College Prep Academy in Lafayette, Louisiana.

T.M. Landry is a year-round, tuition-based, nonpublic school which began in 2005. The school has a unique model to educate students. It is a combination of rigorous courses, self-autonomy, self-efficacy, and a demand for master learning, said co-founders Michael and Tracey Landry. According to its website, the school is designed for students who want to “pursue a serious, purposeful education” and achieve success in college and beyond.

“Coming from the neighborhood where we grew up, most Black kids weren’t truly being educated,” said Michael Landry. “We wanted to try to help kids who society didn’t believe have the potential of becoming educated or who were interested in learning.”

“Nicolas wasn’t doing anything,” Coulanges admitted. The full-time nurse explained that an episode of the Ellen Show led her to research and visit the school where she interviewed the school’s founders, talked with students, then ultimately chose to relocate her son. “I was very serious about this. I could not make a mistake with my son’s future,” said Coulange.

“It’s just amazing!” She said. “He’s gotten back to his love of mathematics again and has matured so much.” Next year, Nicholas Delatour will graduate from T.M. Landry with As in pre-calculus and physics and a C in calculus I from the University of Louisiana at Lafayette where he completed dual enrollment courses. He has received early action from St. John’s University in New York and is waiting on responses from other highly competitive universities where he plans to study number theory.

His handshake is firm and eye-contact direct when he shares how being a student at T.M Landry changed the trajectory of his life. “I had no ambition. No goals. I was just drifting by,” he said. “This school has impacted me more in a year than 15 years in public education has. Now I want to learn more. Mr. Mike helped me release my confidence in my ability.”

Last fall, Devon Hill, eight grader, watched as her older classmates introduced themselves and discussed their first days at T.M. Landry. They all were given The Power of Positive Thinking by Norman Vincent Peale as one of their first reading assignments. One tenth grade student said the book changed how she was thinking about herself. Devon’s older brother, Hunter, said he uses the book as daily motivation even though it is not assigned. He said he remembered visiting the school and meeting students who talked boldly about their plans to attend Ivy League and Top 50 universities. When he started T.M. Landry, his self-esteem was low, and it’s improved. “Before now, I would’ve told you that there was no way. I couldn’t see my self stepping up. (Now,) I see so many opportunities.”

Devon smiled in agreement but said her first experience had nothing to do with reading. She was adjusting. For the first time “in a long time” she was at a school and no one was bullying her, she said. “It’s such a breath of fresh air. Every time I walk in the door, it’s a family. It doesn’t matter race or gender. They are all constantly supporting one another,” said Desaix Hill, Devon and Hunter’s mother.

“We went from a kid who was anxious to one who was happy and confident, who knows the sky is the limit,” said Lanier Cordell, the Hills’s grandmother.

Education scholars like Erin Wheeler Ph.D., executive director of College Beyond, and Calvin Mackie Ph.D. of STEM NOLA have said a student’s “belief” is critical for their success. This belief, which is called “self-efficacy,” is the belief in one’s ability to complete a chosen, specific task, Wheeler explained.

“That is what fuels students. Once they believe, then, anything else is possible,” said Tracey Landry who is completing doctoral studies is on educational leadership. “With self-efficacy, students of color will typically become engaged in the (education) process and that leads to learning. We have to tap into it. We have to let them know they can achieve. Self-efficacy is everything.”

Imagine walking into a converted skating rink with a high ceiling where college flags hang, Mac desktops line one wall for students to work and check the stock market. Long black tables and chairs line that adjacent wall where lunch is served and where upperclassmen work on college assignments. The day begins with every student participating in a morning meeting, which is a process the founders pulled from Corporate America. They all don their red, grey, and white uniform. One student is selected to start the day by motivating the student body. “We want the kids to be prepared for careers,” said Michael Landry. “It’s part of developing master learners.” 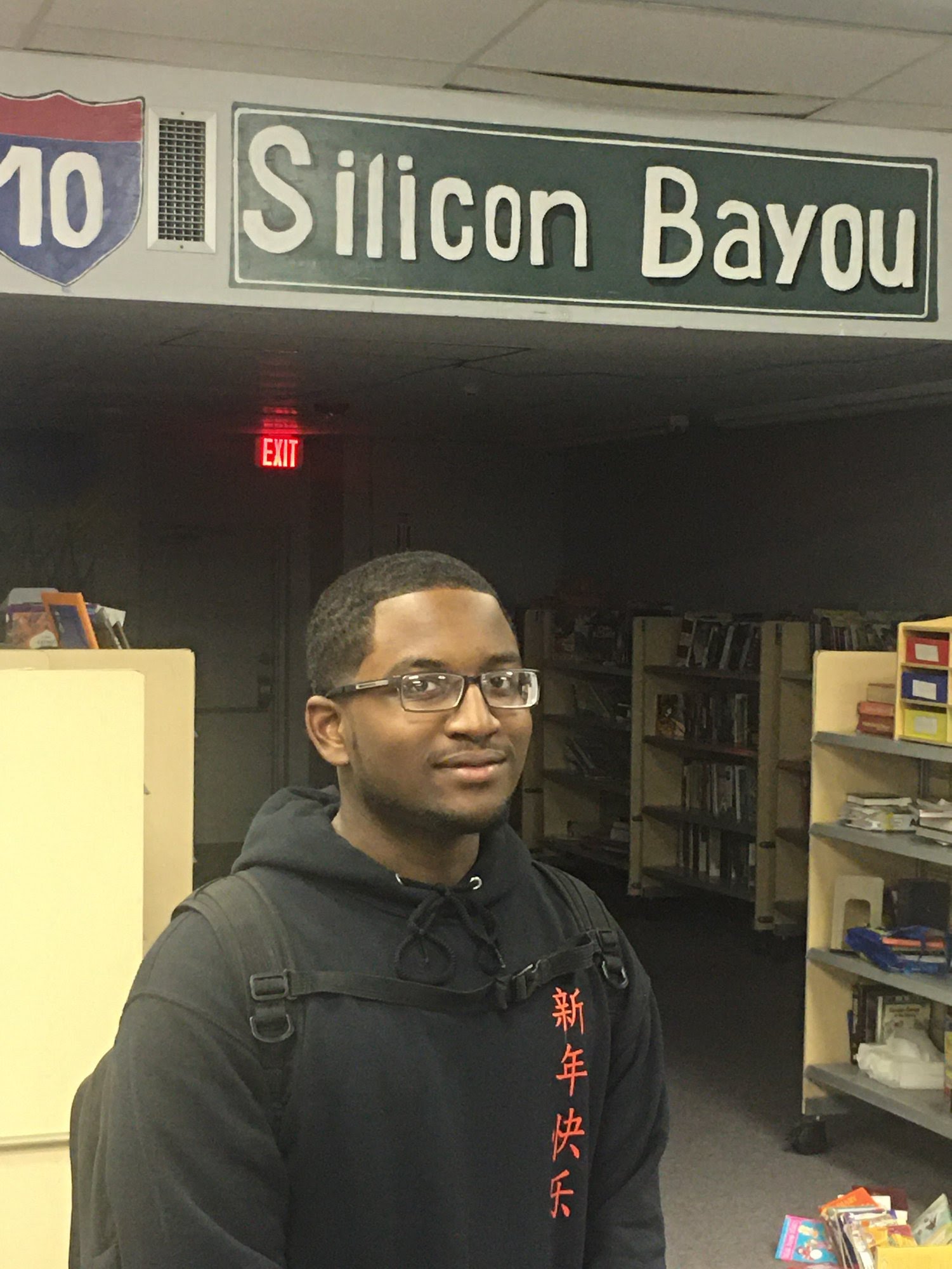 After the meeting, students are dismissed to class. Only one wall separates the students. Middle and elementary students occupy one side, high schoolers the other. There are no other classroom walls or partitions. Teachers—a total of four at any given moment—stand in front of roll-a-way whiteboards and chalkboards teaching small groups of students who sit a foot or two from the teachers.

Before leaving for the day, the students select their class schedule for the next day based on their needs. If a student feels behind in a writing assignment, they can choose to take a half day with that teacher to not fall behind, explained Michael Landry. Students who are interested in attending the school are invited to spend two days in classes before applying. Once admitted, they are given a few weeks, if necessary, to adjust to the school culture, said Tracey Landry.

Unlearning what education and learning should look like and how schools should operate can be a hurdle for parents, Tracey Landry said.

“I had to trust their model. It was something I had not seen before and it was working for other students. I just had to trust,” said Coulanges. “I’m glad I did. What Mike and Tracey have given to him with this school, I could not give to him.”

“This is not a school for every kid. Not a set structure. They set goals and focus on what is learned and not what is covered. Everything here is a unique experience. There’s a lot of focus on the kids and it’s self-directed… It is a luxury here. I am surprised it is not overcrowded,” said Cordell who has been at the school for two years.

One ‘luxury’ the students interviewed agreed on is having administrators who “really care.” “They want the best for us,” Delatour said.

High schoolers said they often call the Landrys with questions even until early morning, on weekends, and during holidays. And Michael Landry said the calls are encouraged. “We don’t want to stop that fire (for learning),” Michael Landry said.

The school stays open on weekdays until 7pm and teachers are available until 6pm to assist students. “The whole time they are here, these students are doing work,” said Cordell who often waits for Hunter and Devin until the evening before heading home 30-miles away.

“We stay and get as much as we need. If we are missing something we know we can stay and until we learn it…and we teach each other,” said Gailen George, a senior who said he initially tried to get kicked out of the school, but now he “owns” his education.

This self-direction and self-autonomy is a challenge for students and their parents upon admission, Tracey Landry admitted. Once the student understands their education is “up to them and they are supported and challenged while they are here, then they will come to task and push themselves,” Michael Landry said.

In Multiplication is for White People, Lisa Delpit, Ph.D., explained, “Many of our children of color don’t learn from a teacher, as much as for a teacher. They don’t want to disappoint a teacher who they feel believes in them… It is the trust that students place in these strong teachers that allows them to believe in themselves. It is the teachers’ strength and commitment that give students the security to risk taking the chance to learn.

Wheeler said when a student believes that they can complete a certain task with success, they begin to discipline themselves accordingly by applying the right effort and seeking help. Specifically, she found that self-efficacy strengthens the academic performance of college students who are studying biology. Other research has shown that building self-efficacy for non-white or underserved students is critical and has significant impact on academic success, she said. “All students have a measure of self-efficacy. Some students have a lesser sense because of their environment.”

Cordell said from what she has experienced at T.M. Landry, opportunities “for minorities are astonishing. This school, Mike and Tracey, it all changes the students’ views about what their own potential is,” she said. She, Colanges, and Hill said T.M. Landry has exceeded their expectations.

As a nonpublic school, the school does not receive state and federal funding and does not seek state approval. However, to maintain transparency and alignment with state standards, a new board of directors reinforces administrative policies and financial governances, said board member Linda Johnson. These measurements, as well as the consistent success of T.M. Landry high school students in college courses and on tests, have helped the school sustain its relationship with admissions departments at top universities nationwide, said board president Greg Davis.

In December 2019, six of eight seniors received early action letters from universities, and eighth through tenth graders earned ACT scores ranging from 19 to 28. Five sophomore enrolled in dual enrollment classes at Southern University and A&M College in Baton Rouge earned As in college algebra and pre-calculus, while six other students attended the University of Louisiana at Lafayette, earning As and Bs in calculus II, conceptual physics, precalculus trigonometry, and college algebra and also Cs in physics with calculus and calculus I and II.

Of the school’s 49 graduates, 40 have graduated from college or are currently in college at schools including NYU, Harvard, ULL, Southern, Stanford, and Brown. According to school records provided by Davis, 71% of elementary and middle school students performed at or above grade level for the 2018-2019 school year. These were results from TerraNova tests which is a nationally-normed, standardized achievement test that meets most states’ annual testing requirements.

“Our number one goal has been educating kids. We know all students are capable of performing at the highest level academically no matter what their social-economic background is. All kids. All kids are capable,” Michael Landry said.

Administrators said they plan to restart its free Saturday tutoring for students from other schools. “It’s not about T.M. Landry or this school over that one. It’s about how students from Southwest Louisiana can show the world that we are intelligent,” Michael Landry said.

Will Your Dream Job Ever Become Your Reality?

A Deep East Oakland Based Grocery Co-op is Opening