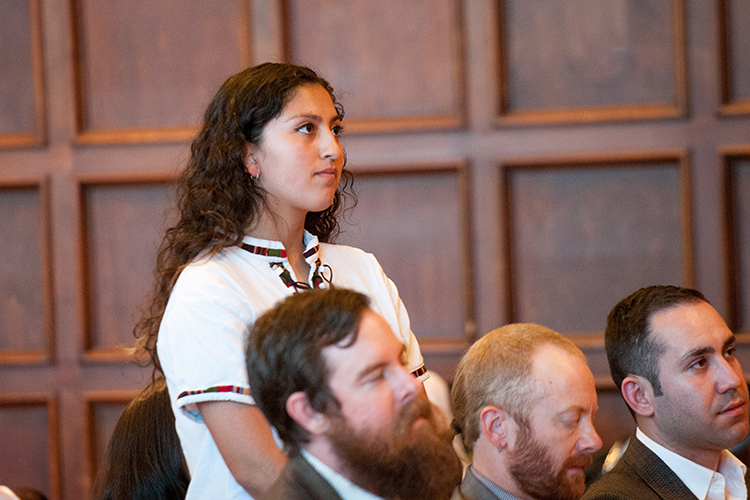 When she graduates in a few days, Ursula Kajani is headed to Rwanda to work with a maternal and child health program through the Peace Corps. As the new Mather Good Citizen Award winner at UC Berkeley, she knows that her experiences with the campus’s Public Service Center — as program assistant, Alternative Breaks leader and Student Advisory Committee member — have prepared her for her next stage, and a future in social justice work.

“I want to extend my appreciation to the PSC for helping us students find critical lenses while learning how to be ourselves. It was really a defining feature of my Cal career,” says Kajani, who, along with a dozen other Berkeley students, faculty and community partners accepted 2017 Public Service Awards at a joyful ceremony on Tuesday.

The annual Public Service Awards ceremony is a highlight of spring at UC Berkeley, which values public service. Chancellor Nicholas Dirks shook hands with the winners and congratulated them from the stage in the Krutch Theatre on the Clark Kerr Campus before a gathering of campus people and awardees’ friends and families.

In addition to Kajani, those honored are:

Thanh Mai Bercher, a graduating senior in public health. Thanh’s service has addressed human rights locally, nationally, and internationally, with a particular focus on sexual assault, advocating for better policies to deter it from happening, supporting survivors and helping raise awareness of the issue. She is a survivor herself, which has motivated her to take action on this issue. Thanh has also addressed many other human rights issues through her work with the campus’s Human Rights Center, and is completing field work with girls who have experienced trauma in the West Bank.

Jesús Guzmán, a graduate student in public policy who worked on immigrant labor issues. An immigrant himself, Guzmán was a founding coordinator of the DREAM Alliance of Sonoma County and an active member of the North Bay Organizing Project’s Immigrant Rights Task Force. He is working with Graton Day Labor Center serving day laborers who are largely immigrants.

Sarick Matzen and Joshua Arnold, graduate students in environmental science, policy and management. Working in the area of food security and land, Matzen and Arnold use a unique approach to their research, inviting community members and groups to participate in soil sampling for soil testing as well as empowering communities to take the lead in dealing with soils compromised by pollution.

International Refugee Assistance Project at Berkeley Law (IRAP-Berkeley). Students offer high-quality, compassionate legal assistance to some of the most vulnerable groups of refugees in the world.

AppCivist for Vallejo Participatory Budgeting, an app for democratic budgeting collaboration. In 2012, Vallejo became the first city in the U.S. to launch such participatory work, eliciting project ideas from residents who then vote on which to recommend to the City Council for funding. AppCivist, a new online collaboration platform developed by researchers at the Social Apps Lab at CITRIS, allows the community to develop proposals online, view developments and comments in real-time and submit proposals for the budgeting ballot.

Karen Chapple, a professor in city and regional planning, Chapple headed up the Urban Displacement Project, which provides policymakers with research and policy recommendations to counter displacement and promote affordability policies.

Two other students were honored with Birgeneau/Undocumented Student Awards:

Miriam Avilez, a leader in Borders and Bodies Collective, a graduate student organization that is raising awareness about the intersection of immigration and public health. She is also working with other undocumented graduate students and the Center for Latino Policy Research on a project responding to the Trump administration by providing support for the undocumented student community at UC Berkeley.

Juan Prieto, who has held positions in RISE, as a representative of UC undocumented student coalition, and in the Undocumented Student Program and Transfer Center. His writing was published on the New York Times during times of political tension on campus, giving undocumented students a voice in the media.