Three days of protest spark mixed reactions — Oaklanders question who is behind the destruction.
Advertisement 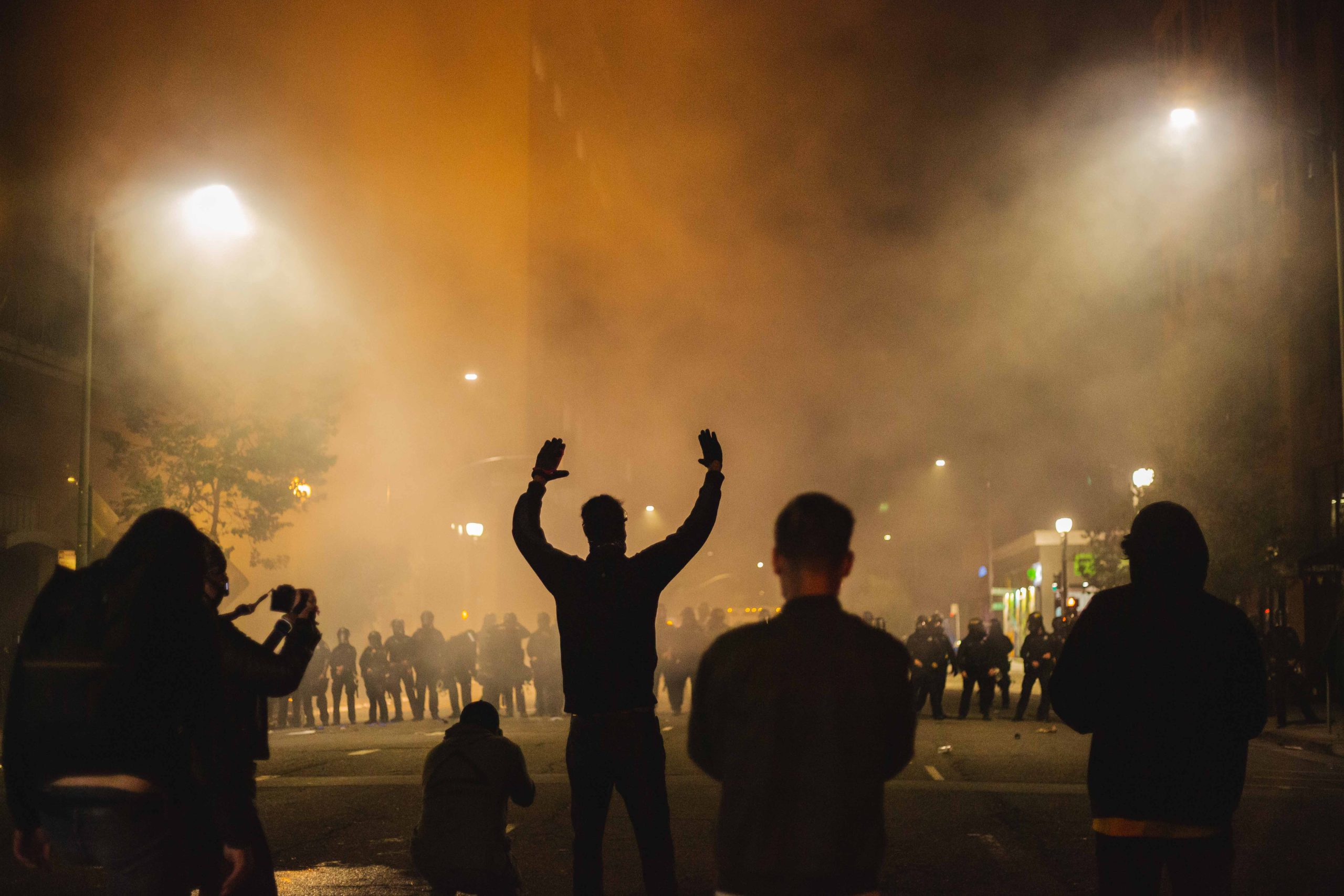 Thousands of people took to the Oakland streets May 29 for what was at first a peaceful protest against the death of George Floyd, who died after a Minneapolis police officer knelt on his neck for nine minutes. 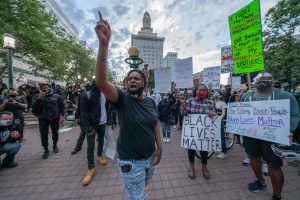 A protester named Taylor spoke to an energized growing crowd as attendees chant “No justice no peace!” Photo by Michelle Snider.

After nightfall, a crowd attempted to gain access to the 880 freeway, throwing water bottles at police officers and launching a flare that started a small grass fire. Others headed towards the Oakland Police Department (OPD) building on Broadway and took a knee as they were met with a line of police officers.

OPD swiftly deemed the protest an “unlawful gathering” and allowed three minutes for protesters to disperse before launching tear-gas, and later rubber bullets. 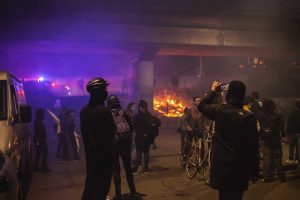 A crowd attempts to gain access to the 880 freeway. A flare was launched by the crowd and started a small grass fire. Photo by Saskia Hatvany. 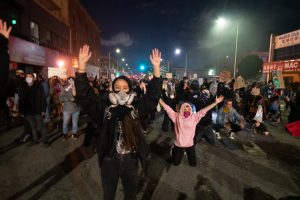 Protesters kneel with hands in the air in as police start to throw tear gas in their direction. Photo by Michelle Snider.

Meanwhile, several small groups split off and proceeded to break the windows of Chase, Wells Fargo and other businesses. Trash cans were dragged into the streets and some were set ablaze.

By 11 p.m. Twitter was filled with videos of looting and fires in the Downtown Oakland area. Walgreens on Broadway was looted and there were reports of a small fire inside. CVS on Broadway was also looted, and the city center Starbucks was set on fire.

A Honda CR-V was driven off the Honda of Oakland showroom in front of a large crowd, and the brand new Target on Broadway was smashed up, looted, and is now to be closed indefinitely.

Last night they were just driving out cars out the showroom out of Honda in Oakland. America be entertaining #ICantBreathe #anonymus #RIPGeorgeFloyd pic.twitter.com/73TJaxkOPx

Later that night, two federal officers were shot on guard at the Ronald V. Dellums Federal Building at 1301 Clay St. One of them, Dave Patrick Underwood, succumbed to his injuries and died.

The shooting was called an “an act of domestic terrorism,” by Department of Homeland Security Acting Deputy Secretary Ken Cuccinelli at a Washington, D.C., news conference. But on Saturday California Gov. Gavin Newsom warned that the shooting should not be quickly associated with the acts of peaceful protesters. “No one should rush to conflate this heinous act with the protests last night,” he said. 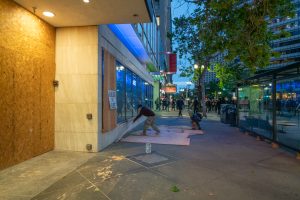 On Twitter, some were outraged at the looting and highlighted that the protests were mostly peaceful. A Chamber of Commerce representative said Saturday that “a small band of well-mobilized vandals” had once again targeted the city’s merchants and most vulnerable people.

“We will not let out-of-town individuals undermine this legitimate protest and destroy our local economy,” said Barbara Leslie, President, and CEO of the Oakland Metropolitan Chamber of Commerce.

More of what happened at the start of the looting in Oakland last night. I was there throughout the night, same narrative, white people inciting the violence and break-ins. They did not come here to protest, they did not come here for us. #OaklandProtest #GeorgeFloyd #BLM pic.twitter.com/wuXSOmF3gj

Most businesses targeted were corporate, but some black-owned and smaller businesses were targeted as well, including Queen Hippe Gypsy, a small shop owned by Lillianna Ayers — a black woman, which only solidified claims that some of the rioters were not aligned with the protesters.

The looting continued throughout the weekend in Downtown Oakland, Emeryville and the Fruitvale area, leading local officials to impose an 8 p.m. curfew. Several peaceful daytime protests also occurred, including a caravan of over 1,000 cars around Lake Merritt, and a march beginning at Okland Tech and ending at the Oakland Police Department on Monday.

View our May 29 Photo Gallery: 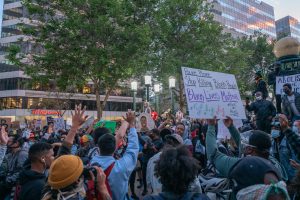 Protesters who met at Frank Ogawa Plaza in Oakland prepare to march down Broadway. Photo by Michelle Snider. 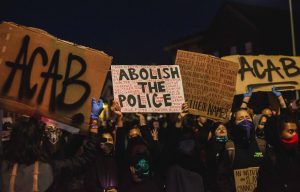 Protesters march through Oakland Chinatown bearing signs that read “ACAB” — which stands for “All cops are bad.” Photo by Saskia Hatvany. 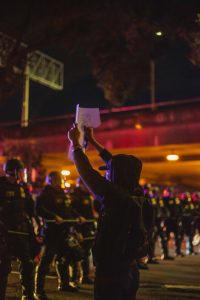 A protester faces a line of OPD blocking the 880 Freeway entrance in Chinatown, Oakland. Photo by Saskia Hatvany. 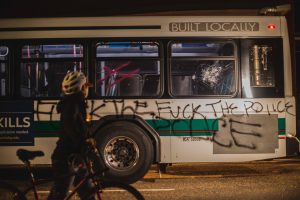 A protester walks by a moving city bus which was vandalized and mounted by rioters moments earlier. Photo by Saskia Hatvany. 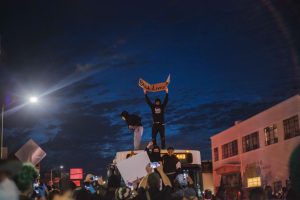 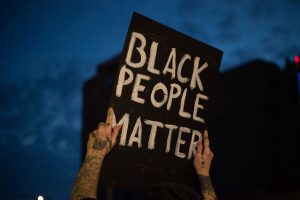 On the corner of 14th and Broadway the boarded up windows of Chase are being removed. 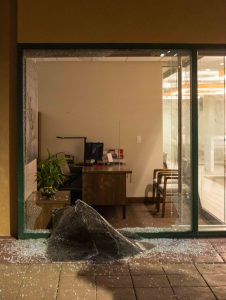