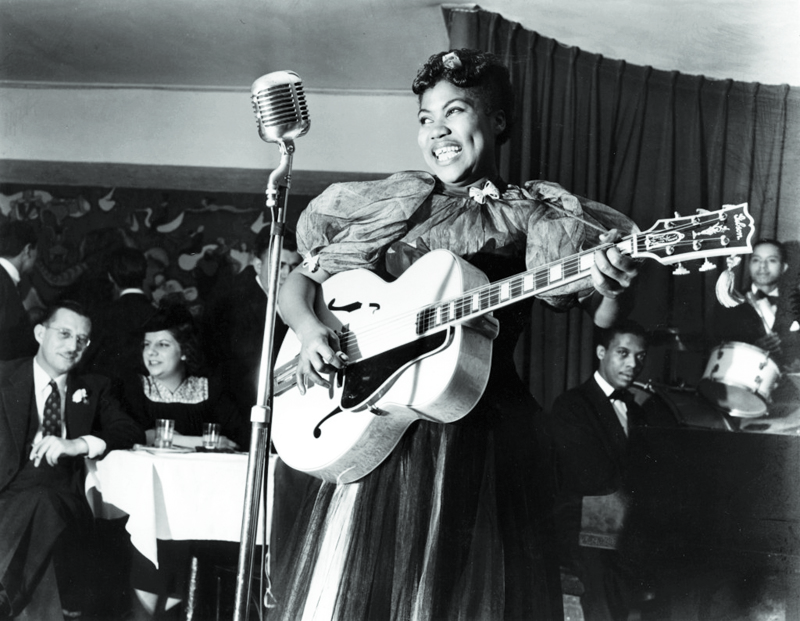 The identity of the true founder of the style of music bred between the church and the nightclubs, dubbed Rock ‘n’ Roll is a debate that has gone on forever in the music world. Names including Bill Hailey, Roy Brown, Elvis Presley, Wynonie Harris, Louis Jordan, and Little Richard have all been tossed in the ring. But it was the name that never made it even close to the ring, Sister Rosette Tharpe (1915–1973), who turned this burgeoning musical style into an international sensation.

Growing up in Arkansas, Tharpe’s home was filled with music: religious singers and traditional evangelists. The born singer began her own career when, at age 4, she picked up her first guitar. By age 6 she was on the road with her mother. The two traveled with an evangelist troupe, performing spiritual music throughout the South.

Around the mid-1920s, Tharpe and her mother settled in Chicago. The music didn’t stop, though. In fact, Tharpe began to pepper gospel with bits of Delta and New Orleans blues. This marriage of sound would become her signature style.

As Tharpe’s voice developed, it grew more and more distinctive. Her style was unconventional, but fans loved it. They hung on to every word and musical note. Add to that, she mastered the guitar, an instrument unconventional to women. She was often told: “you play like a man.” But that didn’t matter to Tharpe, who continued experimenting with her sound.

By 1938, her creative work paid off: She joined the Cotton Club Review in Harlem. She was only 28 at the time.

Tharpe’s first single was “Rock Me,” a gospel and rock ‘n’ roll fusion. Soon after she recorded three other songs: “My Man and I,” “That’s All” and “Lonesome Road.” Her lyrics were shameless flirtations with her openness of love and sexuality. Her fans from the gospel music sect listened with dropped jaws. By 1943, Tharpe wanted to return to the gospel sound. Her contract, however, slowed this move. She was contractually bound to performing secular sets.

In 1944, she recorded “Strange Things Happen Every Day” with Sammy Price. The song showcased her passion for the guitar and the delivery of lyrics. It became the first gospel song to appear on the Billboard magazine Harlem Hit Parade. Some argue that it was one of the first rock ‘n’ roll recordings. It would become one of Tharpe’s most well-known records and the first gospel song to cross over into the R&B top 10 charts.

Although Tharpe has been overlooked in the world of rock ‘n’ roll history, she has been celebrated as a woman. She lived against the norm: a gospel singer who gained popularity by mixing secular sound in her performances; an openly gay woman who toured with her partner; and a brave black woman guitarist who loved creating sound.

Opinion: How the Coronavirus Has Reshaped Wall Street