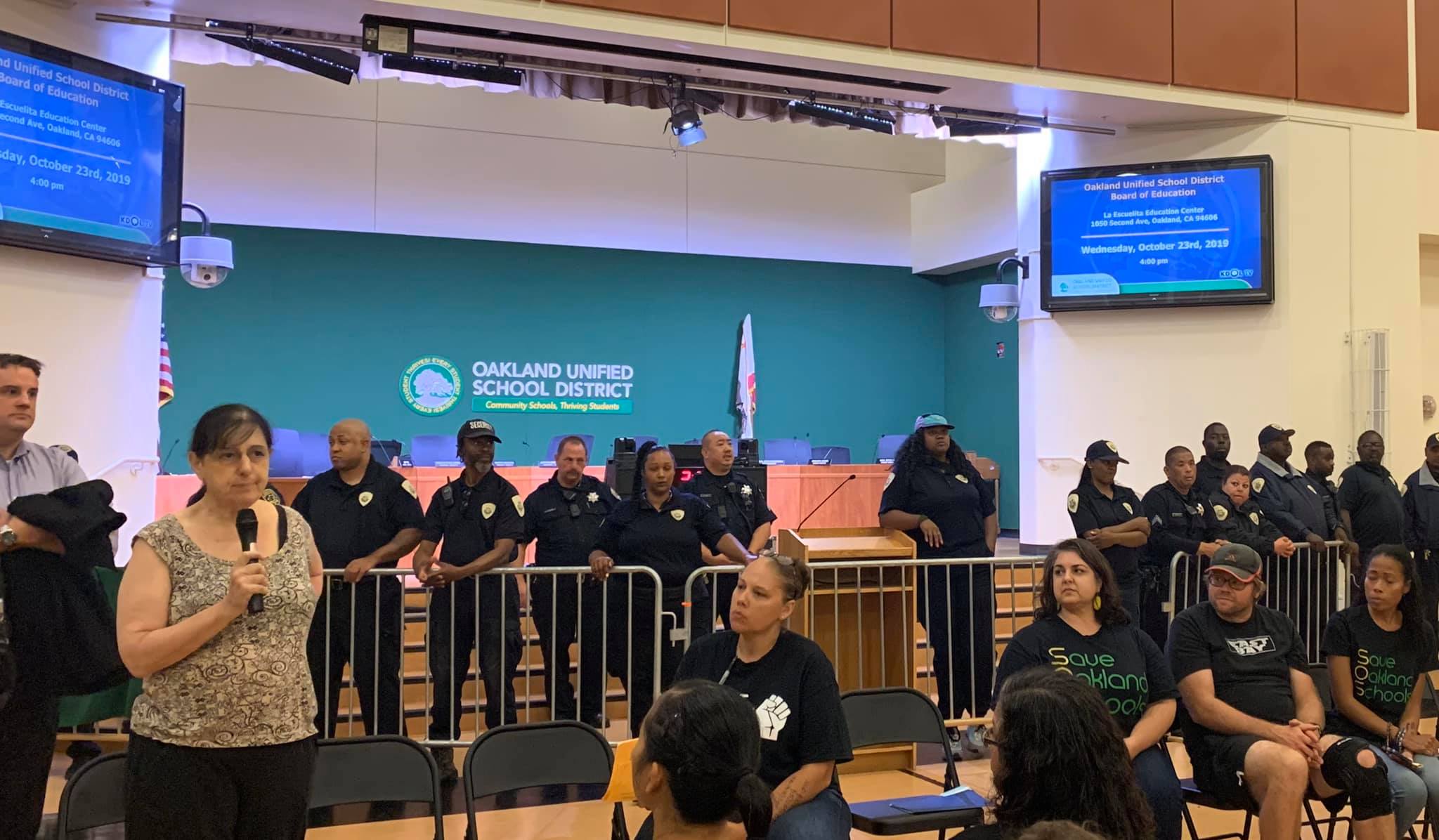 The Oakland Unified School District (OUSD), responding to ongoing parent and teacher protests against school closings at school board meetings , moved this week’s Board of Education meeting to a private “committee room” and plan to continue to meet in private at future meetings.

“Only individuals who are presenting on specific agenda items and members of the media, except those participating in a disruption, shall be allowed to be present in the Committee Room,” according to a statement that was part of the official agenda for the Wednesday, Nov. 6 board meeting. “Members of the public will be able to make public comment and observe the meeting in the Great Room (at 1050 Second Ave.) via two-way video and audio communication,” the statement said.

In response to questions from the Oakland Post, district spokesman John Sasaki said that future board meetings will continue to be held in private.

“We hope to get back to the normal functioning of our Board meetings as soon as possible. The meetings are being evaluated on a case by case basis,” he said.

Several former board members reacted in dismay at the board’s decision to remove the public from official deliberations, which they consider a violation of the state’s open meeting law, the Brown Act.

Sylvester Hodges, who served 12 years on the board including serving as Board President, said, “That’s not a public meeting. The Brown Act doesn’t allow that. That’s a private meeting because they’re restricting people from being in the room where they are deliberating. Their action says they don’t want to see the public and hear their reactions; they want to do what they want to do without hearing from the people.

Civil Rights Attorney Dan Siegel, who served on the school board and at a different time worked as the school district legal counsel, also accused the board of violating stating law.

“It’s not even close to legal. It’s absurd. This school board is out of  control. They’re completely clueless about what is going on in OUSD. They’re presiding over the destruction  of the district, and nobody (in charge)  seems to give a damn.”

Siegel, who is representing the parents and teachers who were arrested and injured at a recent school board meeting, says he has been involved in the schools since the 1980s. Although there have been many protests over the years, he has never seen anything like the actions of the current school board, including the use of school police and security guards to arrest and injure parents at a recent board meeting

“I’ve never seen cops beat up people at a school board meeting before. This is a new thing,” he said.

Explaining the district’s rationale for closing board meetings, Sasaki said the district is acting in “accordance” with the Brown Act.

“The protestors have said they plan to try shutting down our meetings going forward,” Sasaki said. “They did that at three successive meetings and one joint City/OUSD meeting. At the last meeting which they tried to shut down, they were openly talking about doing the same thing at the next meeting. The bottom line is our Board of Education needs to meet in order to conduct the District’s business, and we can’t have that process disrupted.”