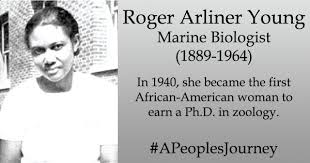 Everyone, especially animal lovers, are familiar with Jane Goodall, the world-renowned English primatologist and anthropologist who is best known for her 60-year study on the social and family interactions of wild chimpanzees in Africa.

But who knows about, or remembers Roger Arliner Young, a groundbreaking zoologist and scientist who was the first Black woman to receive a PhD in Zoology.

Roger Arliner Young (1899 – November 9, 1964), was an American scientist of zoology, biology, and marine biology. She earned her doctorate degree after years of juggling research and teaching with the burden of caring for her invalid mother, Lillie Young until the elder Young died. Her story is one of grit and perseverance.

According to the African American Registry, Young was born in Clifton Forge, Va., and grew up in Burgettstown, Pa. She entered Howard University in Wash., D.C., in 1916 to study music and took her first science course in 1921 under Ernest Everett Just, a prominent Black biologist and head of Howard’s Zoology Department, who was once dubbed the Black Apollo of Science.

Although her grades were poor at the beginning of her college career, Just saw some promise and started mentoring Young.  Her relationship with Just helped to improve her skills and she later graduated with a Bachelor’s degree in 1923. Just continued working with Young and helped her find funding so she could attend graduate school.

In 1924, Young entered the University of Chicago and began studying for her Master’s degree. Her grades improved dramatically and she was asked to join Sigma XI, an unusual honor for a Master’s student.  She also began publishing her research, and her first article, “On the Excretory Apparatus in Paramecium,” appeared in Science magazine in Sept. 12, 1924.  She received her Master’s in 1926.

Young went on to work with Just in 1927 at the Marine Biological Laboratory in Woods Hole, Mass. She assisted Just with his research on the fertilization process in marine organisms, as well as the processes of hydration and dehydration in living cells. Her expertise grew and Just called her a “real genius in zoology.”

Nik Dehejia, incoming president and CEO of the Oakland Zoo, noted that Young’s accomplishments were not only impressive but noteworthy for a Black woman to have achieved in her time. “Dr. Young, at that time, broke new ground, especially for a woman of color in the 1920s, to be the first African American woman to have a doctoral degree in zoology,” said Dehejia.

“It’s an absolutely incredible achievement as she paved the way for Black women and all women of color who aspired to enter the field of zoology and become an animal scientist.”

“As a leader in wildlife conservation here at Oakland Zoo and a person of color myself…I was born in India and moved to the U.S. when I was young…Being from South Asia, it’s a personal passion of mine to challenge myself and challenge our field to find better paths forward in regard to the diversity that includes access and inclusion.”

“Dr. Young’s accomplishments are important because her work will inspire young people today to consider the field of science,” said Dehejia.

Early in 1929, Young stood in for Just as the head of Howard’s Zoology Department while Just worked on a grant project in Europe. In the fall of that year, Young returned to Chicago to start a Ph.D. program under the direction of Frank Rattray Lillie, an embryologist who had been Just’s mentor at Woods Hole.

Unfortunately, Young did not qualify for her exams in January 1930. She had given little indication of stress, but the failure to qualify was devastating. She was still responsible for the care of her mother and her mental condition had begun to take its toll. She eventually returned to Howard to teach.

Her relationship with Just cooled considerably and he started easing her out of her position in 1933. There had been rumors about a romance between the two. Various accusations were exchanged. They had a confrontation in 1935, and in 1936 she was fired, ostensibly for missing classes and mistreating lab equipment.

She took her firing as an opportunity to try again to obtain a Ph.D. In June 1937, she went to the University of Pennsylvania to begin a doctorate under Lewis Victor Heilbrunn, who had befriended her at Woods Hole and gave her the aid she needed to continue. She earned her PhD. in 1940.

She took an assistant professorship at the North Carolina College for Negroes in Raleigh. Unfortunately, her mental health failed again. She worked short contracts in Texas and at Jackson State College in Mississippi. While in Mississippi in the late 1950s, she hospitalized herself at the State Mental Asylum. She was discharged in 1962 and later went to Southern University in New Orleans.

Roger Arliner Young passed away on Nov. 9, 1964, in New Orleans, La. In 2005, she was recognized in a Congressional Resolution along with four other African American women “who have broken through many barriers to achieving greatness in science.”

Information obtained from Science Magazine and Wikipedia contributed to this article.