Oakland – Now that the Antonio Brown show is over, the Raiders can got back to what they know, playing football.  Brown never participated in Training Camp nor the preseason so he won’t be missed.  However, the organization and players erased the toxic energy he brought and are now focused on the future.

“As much as people talk about it, my God,” said Jon Gruden.  “I feel like someone’s smashing my temple on the side of my head.  We’re gonna be fine without him.  We wish him the best.  We gave it a shot and now New England gets their turn.  Good luck to him but I can’t deal with it anymore.”

No more HBO Hard Knocks cameras, a new set of lights begin in this final season in Oakland.   Monday Night Football, no bigger stage other than the playoffs and the Raiders didn’t disappoint in their 24-16 win over the Denver Broncos.

Carr went 22-for-26 for 259 yards that included one touchdown on opening drive.  Rookie Josh Jacobs rushed for two touchdowns and Oakland’s defense was outstanding.  Carr wasted no time getting his offense downfield in the first series.

Carr found Tyrell Williams in the end zone for an 8-yard touchdown giving the Raiders a 7-0 lead.  By the second quarter Carr went deep to Williams for 43 yards and the first down.  That set up Jacobs 2-yard touchdown, where he leaped over his defenders making it a 14-0 game.

The Broncos struggled throughout the first half, they never found their groove against a stout Oakland defense.  Joe Flacco was sacked three times and fumbled.  He made two deep passes to Courtland Sutton for 47 yards but that was called back due to an illegal block in the back.

Flacco also connected with Emmanuel Sanders for 53-yards which led to Brandon McManus third field goal.  Denver’s offense fell flat in the first half and to make matters worse McManus missed a 64-yard field goal to end the half. 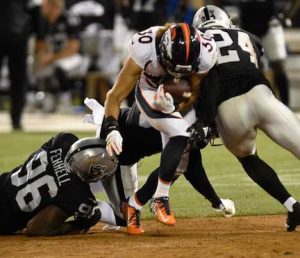 A very scary moment and terrible hit on Gareon Conley, left him injured.  He was carted off the field unable to move but gave the crowd a thumbs up.  Conely’s teammate Johnathan Abram made a tackle on Running Back Royce Freeman, during that play Abram’s inner thigh hit Conely in the head/neck area.  He did not return.

“I got word on him that he’s going to be okay,” Gruden said.  “Don’t know his status for the next game, but most importantly he’s alright.  That was a scary hit he took.  But all the reports I have are very, very positive.”

“I didn’t know what happened,” said Abram who was unaware his leg hit Conely.  “I’m glad he’s OK and hope he gets better.  We told him we were going to win this game for him and he heard us.”

Carr got back to his groove and connected with Williams for a 24 yard pass, that put the Raiders on the goal line.  That setup Jacobs 4-yard touchdown.  Dwayne Harris returned a 72 yard punt and Daniel Carlson kicked a 29-yard field goal to extend Oakland’s lead 23-9.

Flacco found Sanders in the end zone for a 1-yard touchdown late in the fourth.  But their hole was too deep to climb out of.  The emotions tonight for the Raiders was high, especially after a tumultuous preseason.  Oakland can now exhale and focus on the Kansas City Chiefs next week.

“He’s gone.  I wish him the best,” Carr said.  “There’s no hurt feelings.  There’s no anger in me.  It stung as a friend seeing him go somewhere else, but I wish him well.”

COMMENTARY: NFL’s Depression-era Ban on Black Players Lingers On in the Owner’s Box

Despite U.S. Open Loss, Serena Williams is still the Greatest of All Time