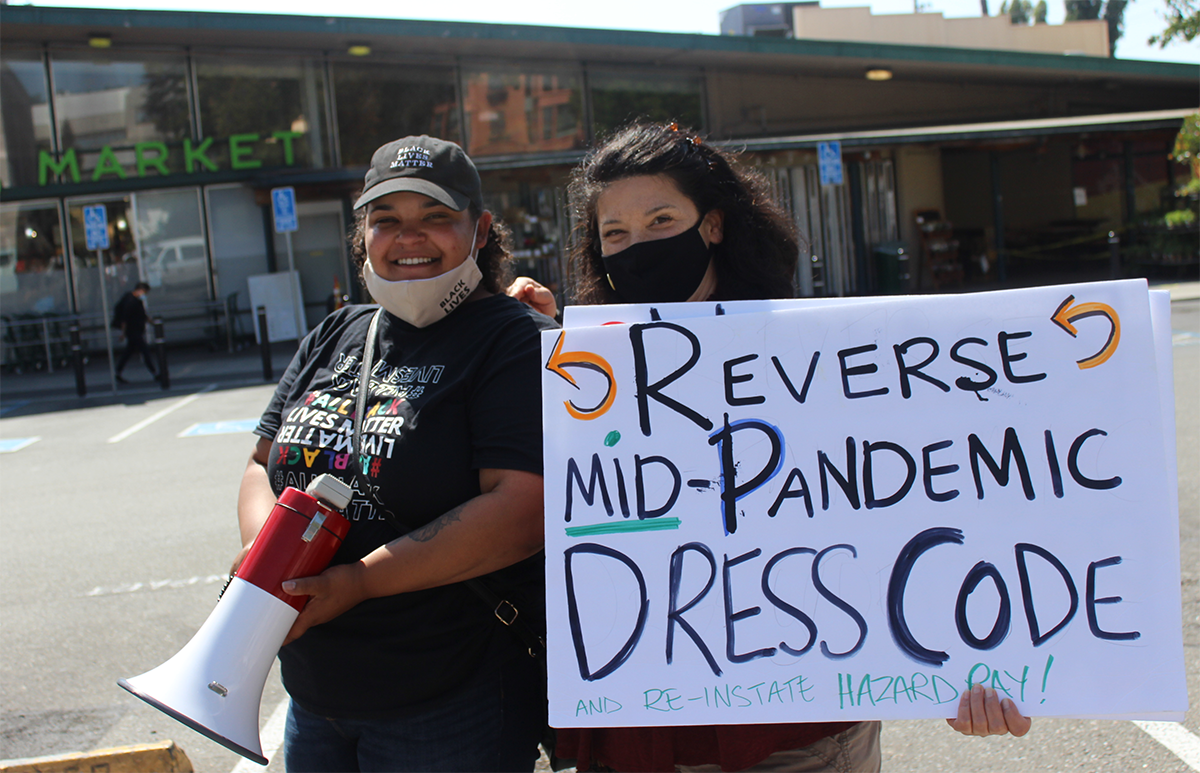 About 35 Whole Foods workers, ex-workers and supporters gathered outside of the store’s Berkeley Telegraph Avenue location on Saturday afternoon to protest the company and local management not allowing workers to wear masks and attire that says “Black Lives Matter.” The action followed and built on a similar larger event that occurred on Friday, July 17, when, according to ex-Whole Foods worker Jordan Baker, about 250 people rallied outside of Whole Foods’ Gilman Street location.

Although protestors said they were also responding to a long history of racism and white supremacy at Whole Foods, one specific incident helped spark the rallies: management at the Gilman street location demanding that Baker, who is Black, remove a mask that said “Black Lives Matter” on it on July 14.

“Store leadership told me they wouldn’t want to get in the middle of me and an angry customer who was offended by me wearing something that says ‘Black Lives Matter,” said Baker. “They told me it was akin to someone wearing a MAGA mask and that it was a controversial statement.”

Management gave Baker the option of wearing another mask or leaving for the day. Not wanting to compromise her principals, Baker decided to leave. Although she had worked at Whole Foods for seven years, her entire adult working life up to that point, she quit the next day she was scheduled to work, July 17.

“I honestly don’t want to work for a company who only ‘supports’ a movement when it makes them look good or makes them money,” said Baker in an Instagram post she wrote on July 14 and edited on July 17.

Although Whole Foods’ website and a sign outside their Telegraph location states, “Racism has no place here,” and “We support the Black community,” other workers locally and across the country say they also have faced repercussions for displaying the message “Black Lives Matter” while working in the store.

Workers at a Cambridge, Massachusetts Whole Foods said that, a little over a month ago, their management sent several workers home for wearing masks that said “Black Lives Matter.” One worker, Savannah Kinzer, was fired shortly after. The workers have filed a discrimination lawsuit that alleges Whole Foods enforces their dress code in a selective way to specifically suppress those supporting Black Lives Matter, including sending workers home without pay, and that Kinzer was fired specifically because of her open support for Black Lives Matter. Whole Foods workers in Seattle have protested due to similar treatment.

Ann Del Rio, who worked at Whole Foods’ Telegraph Avenue location until recently said that management at that store selectively enforces their dress code as well. While the code does not allow workers to wear apparel with messages unrelated to Whole Foods or the products it sells, workers regularly wear sports t-shirts and shirts with names of heavy metal bands on them. Yet a little over a month ago management told a worker wearing a Black Lives Matter mask and one wearing a Mexican Flag mask to take them off.

Del Rio said management escalated efforts to enforce the dress code on July 17, the same day of the protest outside of the Whole Foods’ Gilman Street location, telling workers they were going to start enforcing the dress code more stringently, specifically pointing out buttons and masks with messages on them. At that point, Del Rio had already put in her two weeks’ notice and planned to quit to work another job. But she left three days before her planned last day when management gave her an ultimatum: stop wearing a small Black Lives Matter button or do not come to work.

“I would rather lose three days of work than compromise my ethics,” Del Rio said. “It was very clear that them really coming down on the dress code policy is because they don’t support the Black community and they don’t want to alienate their white customer base.”

The store was closed during the protest due to a power outage, according to Whole Foods representatives on-site. Yet the protest still got attention from those unaffiliated with the store. People driving cars along Telegraph Avenue honked their horns as protesters held signs accusing Whole Foods of racism. A van with the message “WHOLE FOODS IS RACIST” in large spray-painted letters was on display.

A nurse, Eric Torres, who works at Sutter Health Clinic which sits across the street from the Telegraph Whole Foods store, got to work a little early and decided to join the protest. He did not know, before he saw the protesters, about the action.

“I’ve got 15 minutes and I’ll use my 15 minutes for something good,” he said. “I read about Whole Foods and people not being allowed to wear BLM stuff at work. So when I saw people out here I knew what they were supporting. It’s just about human decency.”

Torres held a sign, which Baker made that read “‘RACISM HAS NO PLACE HERE’ SAID THE RACIST.’”

“I have endured racism all my life,” said Denise James, a 66-year-old Black retired teacher who lives near the store and passed by the protest. “It’s unfortunate and awful and detrimental in so many ways to African Americans. I’m so glad that there’s a movement now to highlight all these issues.”

James was happy to see the protestors, saying “more power to them.” She called Whole Foods “two-faced” for displaying a sign on their store that reads “Racism has no place here” while not allowing workers to openly support the Black Lives Matter movement.

John Hopkins, an Amazon worker who is trying to organize other local Amazon workers through an organization called Bay Area Amazonians came out to support and stayed for several hours. Since Amazon owns Whole Foods, he sees their fights as related. He wore a Black Lives Matter mask and held a sign he made that read “Solidarity Means Saying BLACK LIVES MATTER!!!!!!”

“Black Lives Matter should not be a controversial statement, “ he said. “The fact that it is is systemic racism.”

John Farmer, an ex-Whole Foods employee of seven years who quit because he said the workload was too much for the pay, spoke through a loudspeaker to the protesters and those passing by.

“Attention Berkeley: Whole Foods is closed due to an outbreak of racism,” he said, jokingly. “They are too racist to operate.”

Other protestors used the loudspeaker to call for Whole Foods to pay reparations and reinstitute the two dollars an hour COVID related hazard pay allotment that the company began in March but ended in June, even as COVID cases have continued to rise nationwide.

Although the protest was scheduled to happen between 1 p.m. and 4 p.m., it ended up running longer than planned and the last people left just after 5 p.m.

“Black people deserve to know that they are respected and protected,” said Baker. “I wore my mask because saying Black Lives Matter isn’t controversial. I had a lot of support shown to me and the others throughout the company who are receiving the same treatment. Taking a stand against Whole Foods and being a part of the biggest ‘fuck you’ that they have received in a long time feels good and it feels like it’s been a long time coming.”

When emailed, Whole Foods Media did not respond to the question, “Does Whole Foods support the Black Lives Matter movement?” Instead, they sent a statement that was identical to one published in a recent Berkleyside and Boston24News story. It reads as follows: