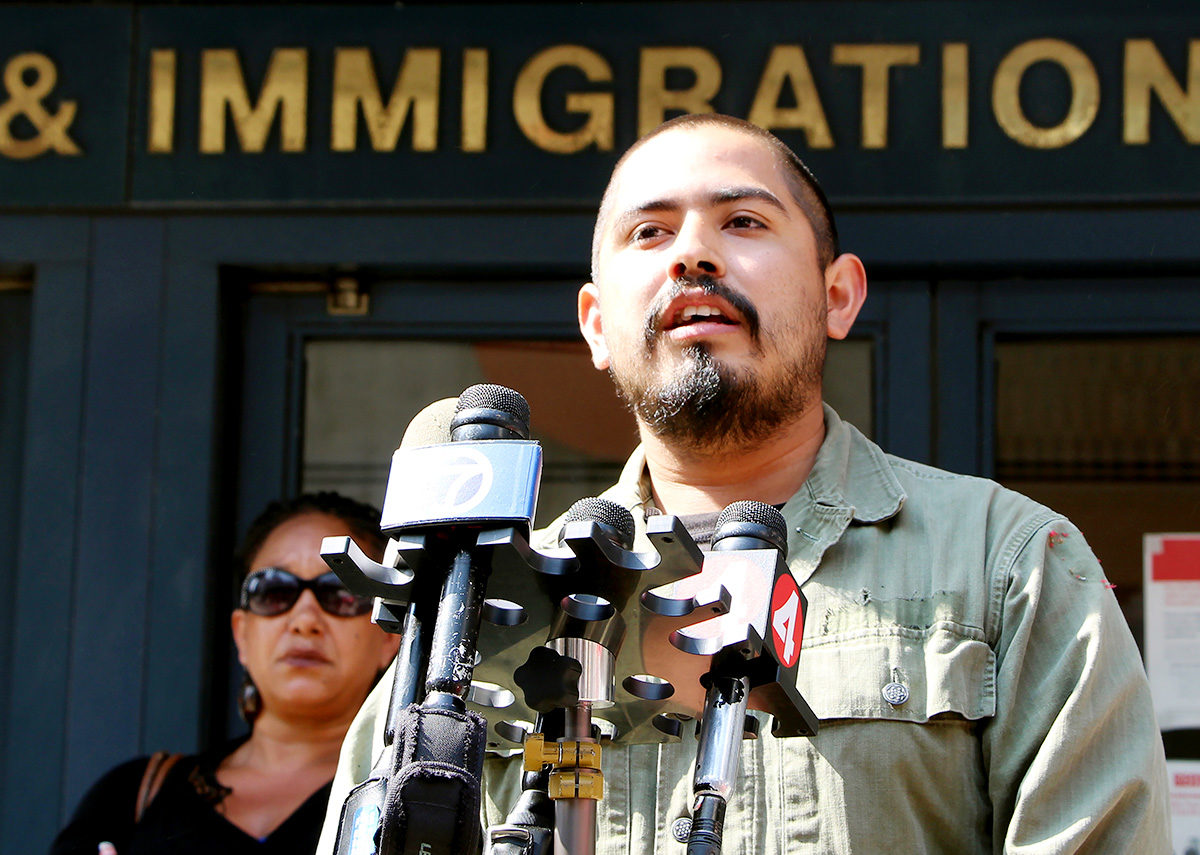 ‘Occupy ICE’ protester Imri Rivas calls for the abolition of ICE at a July 3 press conference in front of San Francisco’s U.S. Citizen & Immigration Services building, where dozens of protesters have set up camp, blocking a driveway used to transport detained immigrants. Photo by Sarah Carpenter.

‘Occupy ICE’ protesters remain camped out in front of San Francisco’s U.S. Citizen and Immigration Services building, calling for the abolition of ICE.

A group of tents and a makeshift barbed wire fence block a driveway used by vehicles transporting detained persons, and multiple protesters have said they are committed to staying there until the agency is abolished. The encampment doubled in size Wednesday from the day before, and is now taking over a lane of Washington St. as well as the sidewalk.

Demonstrations continued on the fourth of July at a “Block ICE Block Party.”

On Tuesday, the Anti Police-Terror Project held an emergency press conference at the encampment site, 630 Sansome St., accusing ICE of retaliating against the occupation by denying services to immigrant families.

ICE representatives have commented that hearings are continuing as normal despite the occupation, and that some hearings are cancelled or rescheduled when attorneys do not show. ICE has yet to comment on the case highlighted in the emergency press conference, in which an immigrant with a heart condition was denied his scheduled hearing.

Cat Brooks, co-founder of APTP and current Oakland mayoral candidate, spearheaded the press conference, inviting protesters to speak to several news outlets about why they are there.

“What’s important for me is the active disruption of ICE operations. I hope people do it everywhere,” said Imri Rivas, one of those camping out in front of the building.

Similar occupations are also camped outside of ICE detention centers in Portland and Philadelphia this week, following mass protests nationwide over the weekend at ICE headquarters in New York, and facilities in Los Angeles, Detroit, Louisville, Washington, San Francisco, and more.

In six weeks, over 2,000 children have been separated from their parents, who were arrested for illegally crossing the border to the U.S. from Mexico.

Unaccompanied minors are being ordered to appear in immigration courts alone, without representation.
No database or tracking system was in place during these separations, leaving means for reunification unclear.
“They are playing with people’s lives and this is not a game,” said Brooks.

Rep. Jeff Denham on Monday was locked out of a Pleasant Hill detention facility holding immigrant children 13 and younger. Denham said he wanted transparency in these facilities, and he wanted to see for himself what the conditions were inside.

The facility is run by Southwest Key Programs, a nonprofit paid to care for the children by the federal government. Southwest Key currently runs 26 similar facilities in California, Arizona, and Texas.

Over 70 members of Congress had been cleared and toured their facilities within the past two weeks. When Denham requested access, he was told they needed two weeks notice, and did not receive an explanation for why they needed that time to prepare. Denham had hoped to tour the facility before meeting with Congress to legislate on the issue.

Related Topics:ICEimmigrationOaklandSan Francisco
Up Next