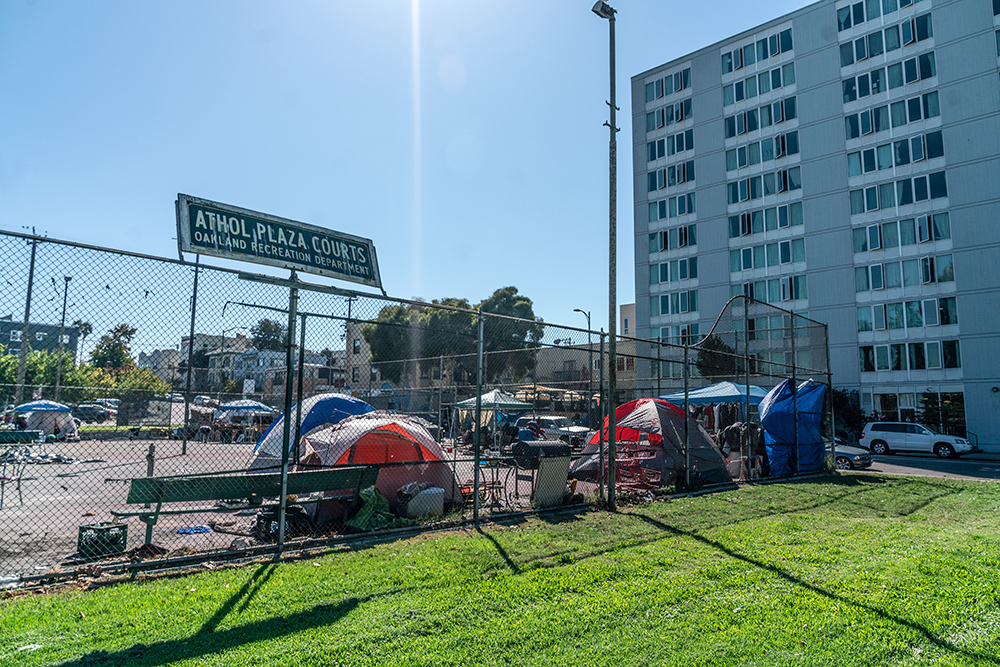 A homeless camp has grown at Athol Tennis Courts located on 1750 Lakeshore Ave since the start of the COVID-19 pandemic. Photo by Michelle Snider.

A life long resident of Oakland with a past in playing pro-tennis. Atkins realized his path to becoming a successful accountant started at the tennis courts in Athol. He now wants that opportunity for young Oaklanders today.

He started playing at Athol tennis courts when he was 12-years-old. He was inspired by pro-tennis player Arthur Ashe. Ashe was the first Black man to win the singles title at the US Open, Wimbledon, and the Australian Open.

Playing tennis is what lead Atkins to become a liaison for a project he hopes will become successful enough to become a model across the country. The focus at Athol is unique in that the tennis courts have long needed repairs and maintenance, yet Atkins has the additional challenge of pushing the city of Oakland to find homes for each individual who currently resides there. He does not want them removed without proper housing. Atkins has spoken to the residents there saying, “I know them face-by-face.” He has heard their concerns about being leaving the park out of fear of not obtaining alternative locations or permanent housing.

Atkins has worked with city councilmember Nikki Fortunato Bas on a solution but the city has been at a standstill on the response for working on a plan with dedicated relocation for the homeless at Athol.

In a statement sent to KTVU in July 2020 regarding Athol Plaza, Bas said: “Our office is dedicated to identifying and moving unsheltered residents into permanent housing or shelter options and working with encampment residents.”

Once the homeless have been housed his council can move to repair the tennis courts and bring youth to the park so they can learn how to play.

With the National Parks Coalition, Atkins is trying to raise 10K signatures by Dec 31. to support the pilot program. To support the campaign virtually, email Atkins at tolarryatkins82@yahoo.comstating your full name, and city.  An address is not required.