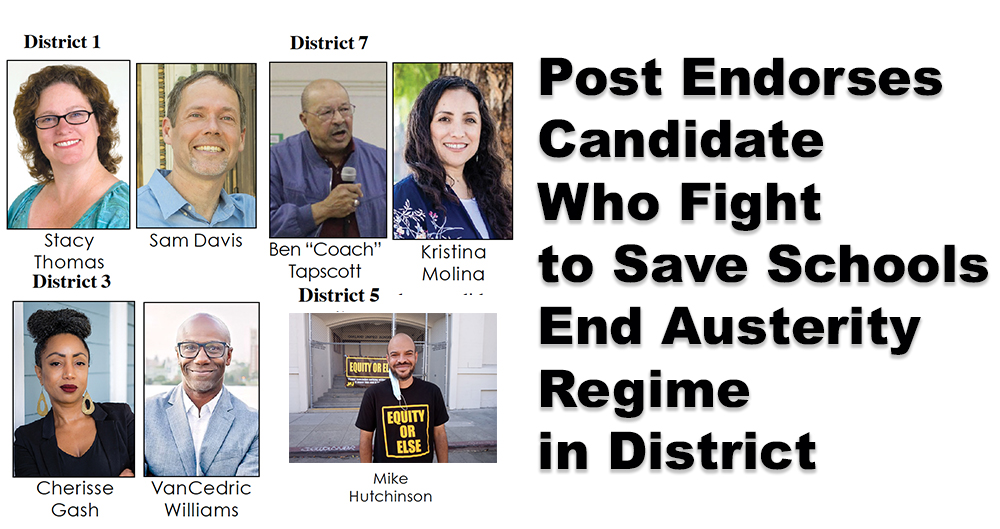 A committee of local educators created by the Oakland Post Editorial Board has endorsed candidates for the Oakland Board of Education in all four open races this year, supporting outspoken community leaders who oppose austerity and continued domination of district policies by state agencies and who unequivocally oppose closing neighborhood schools.

The Post did not endorse candidates who support closing more Oakland schools, take money from privatizers or pro-charter school billionaires or would like the district to continue the kind of draconian cuts that have become common in recent years.

“Oakland public education needs less obscurity and more transparency. Families, teachers, students, and community stakeholders need to know how schools are spending and investing funds. School site parent-run organizations need to be provided with their school budget to see how the administration has expended every dollar of their child’s education,” she said.

“When they cut, they cut at the school sites, (but) we’re top heavy with upper and middle management.

Stacy Thomas wants to give leadership on the school board that puts the students, families and schools first.

“I want the school board to be really fiercely protective of our resources and our public schools,” she said.

Thomas, who owns a bookkeeping business, wants to bring her background in accounting to the budgeting process and focus on improving the district’s financial mismanagement. She said OUSD should take more control over its budgeting and hold district staff accountable for ensuring the budget is balanced without harmful cuts.

If elected, Thomas said she will push back against recommendations from the Financial Crisis and Management Assistance Team (FCMAT) and a state trustee who oversees the district’s finances.

Sam Davis is a former Oakland teacher and the father of an Oakland Technical High School student. He currently works at the University of California on an education data project to help California high schools better prepare their students for college eligibility. He is also active with the Oakland Tech PTA, and a volunteer board director with Faith in Action East Bay.

Cherisse Gash is an Oakland native and comes from a family of educators. Before becoming a parent in the district, she was a student in the district. She has been active in numerous Parent Teacher Associations at the elementary, middle and high school levels. She has been a dedicated parent volunteer at several different schools and district programs including the African American Male Achievement program.

She works as a health educator, advocate and caretaker and is a proud member of a union family. As a longtime resident of District 3, she understands the needs of the community and will fight for equity and educational opportunities.

VanCedric Williams has worked for 20 years as a teacher in San Francisco.

He is an officer of the San Francisco teachers’ union and has statewide experience in the California Teachers Association. He has lived in Oakland for 10 years.

He strongly opposes charter schools, closures, co-locations, refuses to take money from privatizers such as GO in Oakland and the California Charter School Association (CCSA).

He advocates for racial and social justice in schools and communities.

Mike Hutchinson, who co-founded the Oakland Public Education Network (OPEN), was born, raised, and educated in Oakland. He has spent more than 20 years working and volunteering in Oakland’s schools and with Oakland youth.

He has been at the forefront of fighting against school closures, for democratically elected school boards, and to end the district’s adversarial relationship with community by creating an authentic community engagement process where the community is treated as partners and decision makers.

He strongly opposes charter schools. “Charter schools are not public schools. I have been working for years to end the privatization of public education. I have never and would never advocate for a charter school.”

Election 2020 – A Cheat Sheet for 12 Propositions to Know About Before Nov. 3