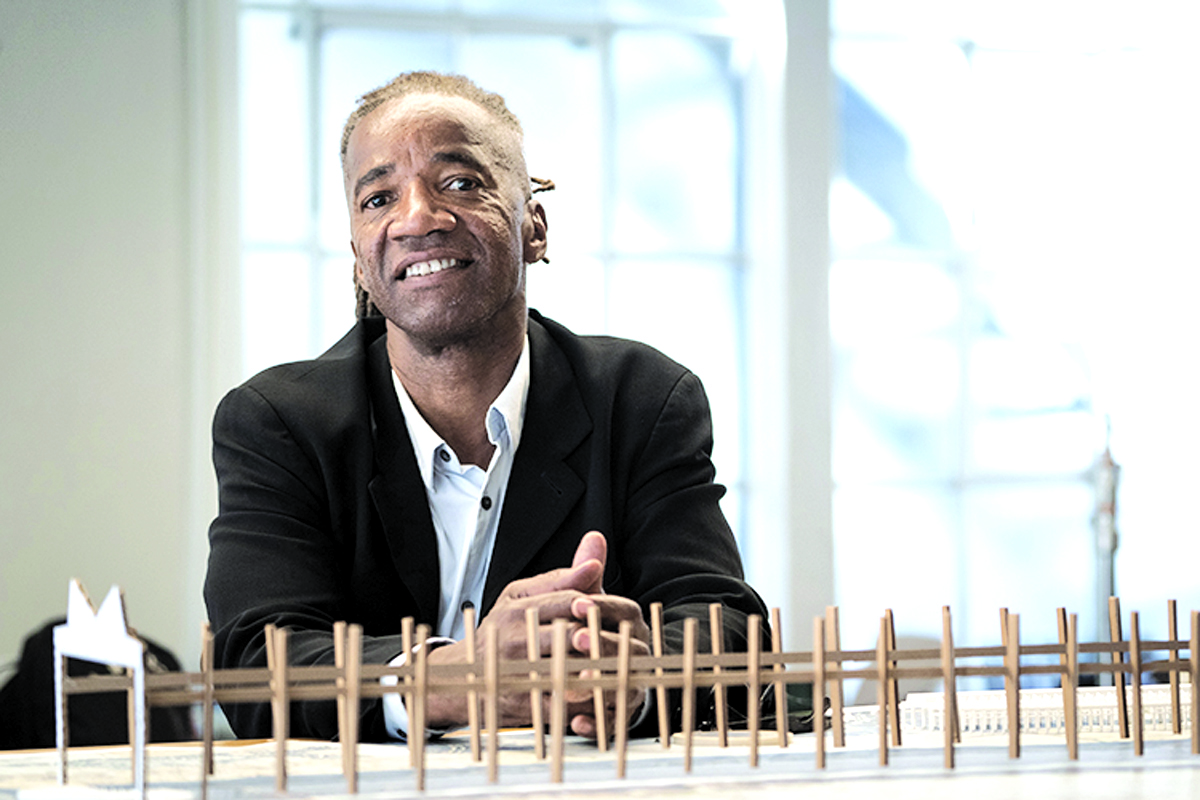 In the way that life experience can be more circular than linear, so are certain incidents marking MacArthur “Genius” award-winner Walter Hood’s life right now. The West Oakland public artist and landscape designer whose work, he says, strives to retain the cultural memory of places as its residents change, is involved in a project just breaking ground that bears witness to the ugly truth of slavery.

This weekend he is going to reconnect with a college friend, Ford Morrison, the surviving son of the late author Toni Morrison.

Toni Morrison’s famous 1989 statement that there were no known monuments acknowledging the horror of slavery led to ‘the bench by the road’ on Sullivan’s Island, S.C., in 2008, which bears a plaque marking the place where about 40 percent of the Africans entered the maw of slavery in the U.S.

Hood had already been commissioned by the International African American Museum in Charleston, S.C., to design its garden when a side trip to the bench inspired the museum directors to do more. That’s how Hood got the job of creating a monument to honor the memory of those who perished as a result of the slave trade.

His vision for the monument is to create a “place to talk about our ancestors, meditate…a space where people can just be.”

Recent excavations prove that the place is indeed where the slave auction house once stood and where they came and went by the thousands.

To Hood, it is hallowed ground. He envisions a fountain whose base will be an abstract sculpture inspired by depictions of how the Africans traveled in the hulls of the slave ships, stacked upon one another.

Hood expects the project to be finished next year and the museum plans to open in 2021.
To date, most of Hood’s work has been commissioned but the no-strings-attached award of $625,000 will give him some breathing room to perhaps indulge in some fine art as well as public art.

“I would like to do some painting or some sculpture,” he said, adding that he would also like to spend a little more time playing guitar.

The owner of Hood Design Studio was at his office when he learned the news last week. “At first I thought it was a gag,” he initially told the Los Angeles Times. “I was floored. I walked around in a daze.”

Hood, who also teaches at UC Berkeley where he earned a MArch in 1989, is described by the foundation as “a landscape architect bringing social justice concerns and ecological sustainability to his field through a commitment to community and historical memory.”
The Seventh Street Gateway in West Oakland is an example of the 61-year-old’s vision. “We put seven faces of African American heroes over the road as a gateway, but we used the Caltrans signpost to do it,” he told the LA Times.

As West Oakland’s population changes, the Gateway sculpture takes on additional meaning. “Most of my work on any public land is trying to document, and represent culture as cities change,” he said. “How do we imbue our public landscapes with those kind of landscapes that remind the people who live there of themselves?”

His intent was proven when he attended a conference of Black designers on the East Coast and the sculpture was brought up and a young Black man interrupted him.
“That’s your work?” he asked.

The young man told Hood that he worked in San Francisco, and said that passing the sculpture each day on BART “gave him strength” as he prepared to enter a challenging environment. Passing the sculpture on the way home lets him know “that he is home,” Hood said.

Hood will continue to be dedicated public art and is commited to becoming part of an art community that “weaves together a different set of narratives of how we see ourselves, new ways of seeing each other in a given place.”

“Seeing each other” is important to Hood, who has witnessed the West Oakland neighborhood, where his studio is located, change over the last 25 years.

“I’ve watched families grow up here and move away, and other families move in,” he said, tiredness showing in his voice. “We don’t know how to talk about ghettoization of people, the way value is lost when one group of people lives in a place, but value is gained when another group of people moves in.”