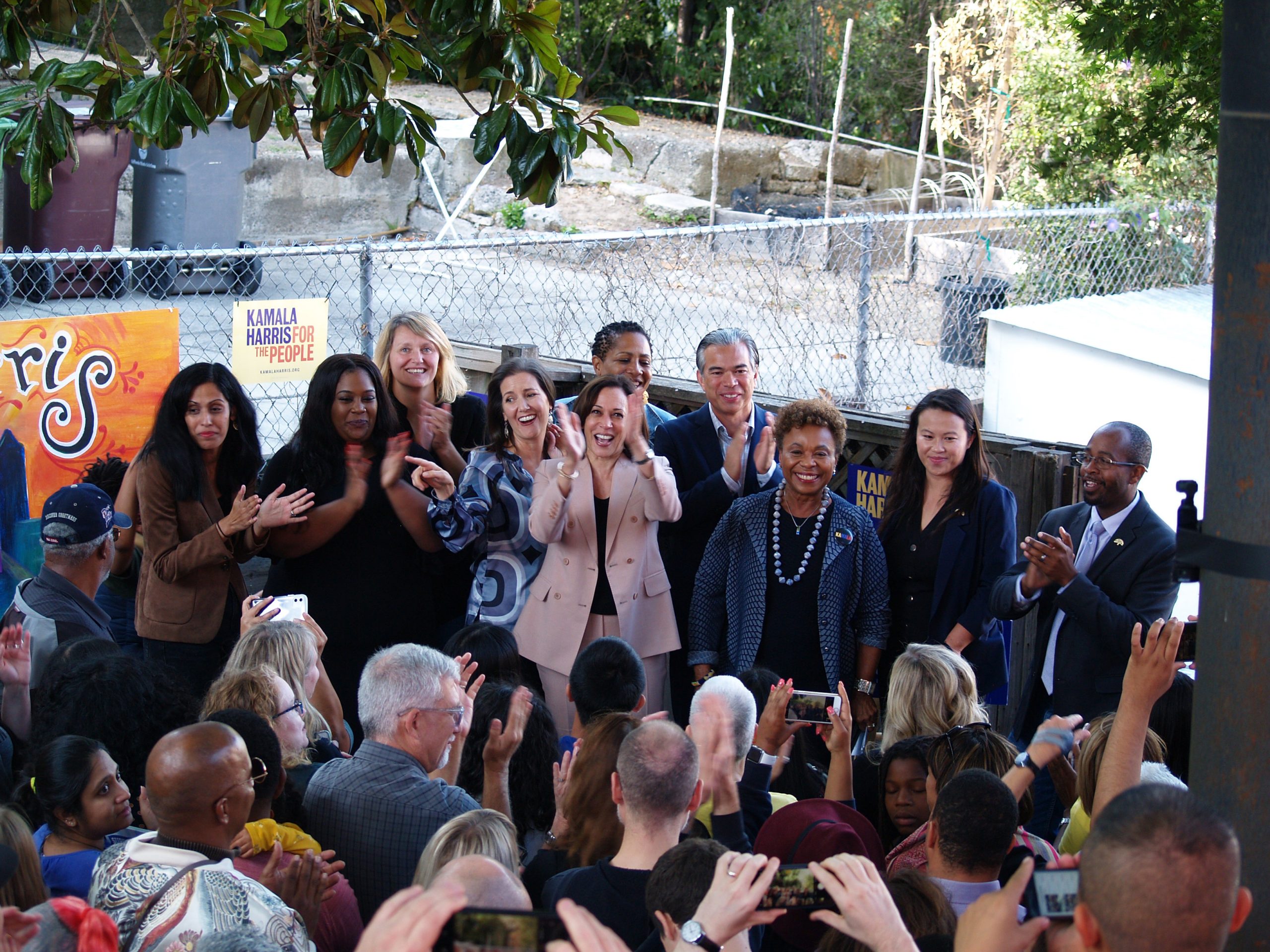 With much fanfare at her arrival, Sen. Kamala Harris opened her Oakland campaign office in her bid to become the 46th president of the United States.

On Sunday, Sept. 29, more than 300 supporters, volunteers and fans met at 3900 Grand Avenue with photographers perched on rooftops to get the perfect shot of the property’s rear courtyard.

Taking the microphone to many cheers, rock-star style, Harris addressed the audience.
“Oakland represents the promise of America,” said Harris to applause. “We have the ability to see what can be, even if we haven’t seen it before. We have the faith to be unburdened by what has been. This election is about having faith to believe in what our country can be, unburdened by what has been,” said Harris.

“The last two years, people have been angry, depressed and afraid…but those of us in Oakland know that there is nothing we have achieved in this country that has been about progress, that hasn’t always come with a fight. Whether it is equal rights, civil rights or social justice, we know how to fight and we love a good fight.”

With a call for unity in the country, Harris dismissed the idea of conducting different conversations in different regions of the country. “Regardless of what folks look like, what language their grandmother speaks, what God they pray to, no matter the gender or race we all know that we have more in common than differences.”

Utilizing a coalition-building campaign strategy, Harris vowed to be about the community and among the community. “This race should not be about who you beat down, but who you lift up and there’s so much more that binds us than separates us.”

While the poll numbers show that Harris may be off to a slow start, she remains steadfast and fearless. “I’ve won every race that I have run. I work hard and I intend to earn the votes to win. There is no question (that) we need to have on that debate stage in the general election someone who has the ability to successfully prosecute the case against four more years of Donald Trump.”

Addressing the current scandal in the White House, Harris simply called for a due process of justice.
“The inspector general of the State Department needs to open an investigation into which staff employees and members of the State Department facilitated Rudy Giuliani as a private attorney under the president to engage in acts against the interest of the democracy and systemic justice in America and so (U.S. Secretary of State Mike) Pompeo should be required to be part of that investigation.”

U.S. Rep. Barbara Lee also attended the event in support of Harris.
“She will take on Donald Trump, we need the total opposite of this man in the White House and that would be Kamala Harris,” said Lee. “Kamala Harris stands for the power of the people.”

Oakland Mayor Libby Schaaf hailed Harris as a “warrior for justice.
“Democracy matters and it works, never underestimate an Oakland girl,” said Schaaf.
Schaaf along with San Francisco Mayor London Breed have had to flex their power up against Trump’s attacks on California and Oakland in particular regarding their stance on city sanctuary policies, immigrant rights and general compassion toward undocumented immigrants.

For Councilmember Lynette McElhaney, supporting Harris is personal. “Kamala stood with me and my family when my son was stolen from me,” said McElhaney — reffering to her son, Victor McElhaney, who was fatally shot in Los Angeles in March 2019. “As president, Kamala will make real the necessary gun reforms to keep America safe. It’s time to put Oakland in the White House.”