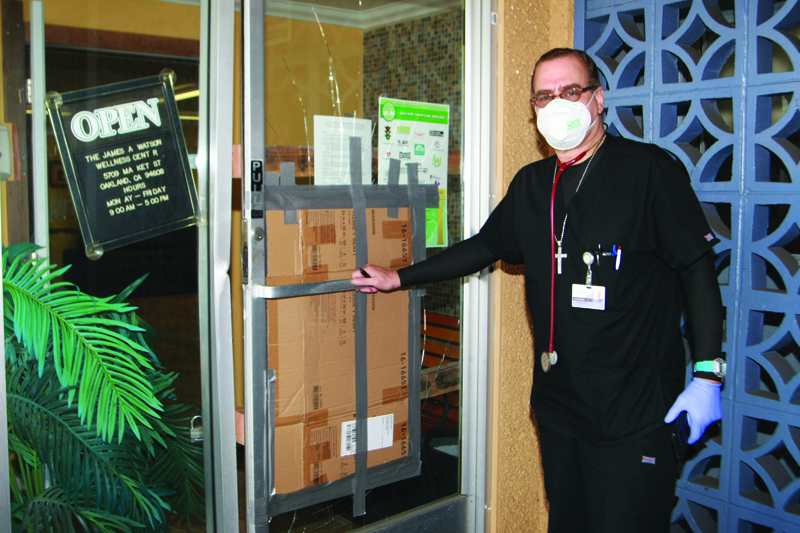 On Monday, Dr. Geoffrey Watson surveyed the damage to his North Oakland medical facility caused by looters Saturday and Sunday nights, under the guise of protesting the brutal murder of George Floyd on May 25th by four Minneapolis police officers.

Gastroenterologist Dr. Ralph Peterson’s East Oakland office located at 10520 MacArthur Blvd was also vandalized. Peterson questions why people responsible for healing and caring for the community are being targeted.

“The security video shows it wasn’t the population we serve. They were young, largely Hispanic and white, all under the age of 23, and were organized with cars pulling up to take what they could.” said Peterson.  “Thank goodness our doors held with only three getting through two windows.” Peterson feels the broken glass deterred the group of 15 milling outside who, he observed by video footage, were very organized in their intent.

The James A Watson Wellness Center, located at 5709 Market Street and Peterson’s office continue to remain open to serve the community while other doctors have closed their offices because of COVID-19.

“We’re one of the few facilities still seeing patients,” said Dr. Watson, “Most doctors are teleconferencing with their patients.  In addition to being open, as a member of the Oakland Frontline Healers organization, we’re testing, distributing food and PPE.”

A neighbor reported seeing six to eight African American men break down the front door, knocking the door off its hinges.  They managed to access and break a second gate, ransacking the office and stealing two computers.

A saddened Watson noted, ”Whoever broke in knew this was a Black business as soon as they stepped in the door.  Pictures of past doctors are on the walls as well as African artwork.

“It’s unfortunate the very population we’re serving would prey upon Dr. Watson who is providing valuable service to them,” said Tanya Dennis an Oakland Frontline Healer leader “Oakland Frontline Healers is one of the most powerful organizations our people have in the community right now.  We’re on the front line distributing PPE, food and testing.

“We represent the leadership the Oakland community has been seeking,” she continued.  “As important as our work is right now, what we will be doing to rebuild the Black community after COVID-19 will be essential.  We need the community to support us, not undermine our efforts by looting.  Looters are dishonoring George Floyd’s memory.”

When you think about police shootings, there are more of us shooting each other,” Watson said. “We want the police to do their job, but we have to do our job and respect each other.  This is the time to come together and stop destroying property and killing each other.  It’s time for Black-on-Black support.  People are not thinking.  When we had the Panthers and the NAACP we had a 10-point plan and we had direction.  I joined Oakland Frontline Healers because they are our new leadership in the community.  Please respect the movement.”

Dr. Peterson shared his observances about the vandalism. “We’re Black doctors and all we do is heal.  We were targeted because they don’t know us.  I’ve been serving the community since 1983, Dr. Watson’s office even longer.”