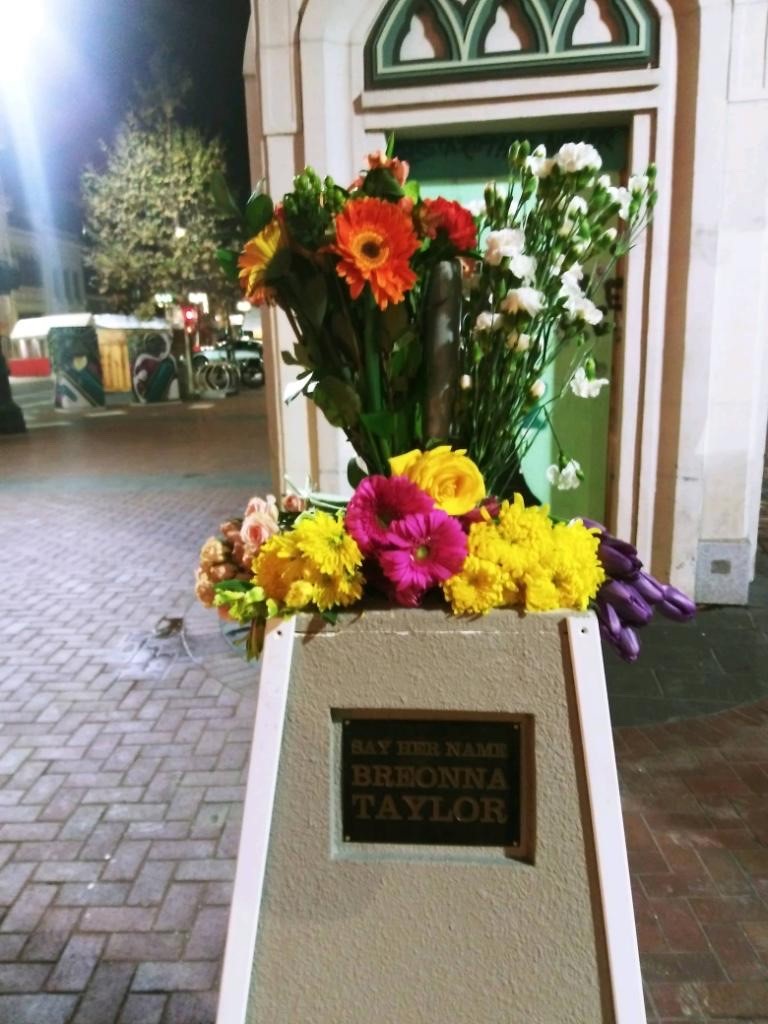 Sculptor Leo Carson placed a bouquet of flowers on the column where his statue of Breonna Taylor had been installed on December 12. Photo by Auintard Henderson

Wanting to create a ‘symbol of joy,’ in memory of Breonna Taylor, Oakland sculptor Leo Carson installed a head-and-neck bust of her at Latham Square on Dec. 12, 2020.

On Tuesday, the bust of the emergency services worker killed in Louisville, Ky. last March in a botched police raid was stolen after it had been found smashed to pieces on Dec. 26, 2020.

Also on Tuesday, it was reported that two police officers involved in Taylor’s death in Louisville, Ky., may face termination.

Another officer, Brett Hankison, was terminated last June for blindly firing through the covered patio door and window of Taylor’s apartment.

None of the men have been found criminally responsible for Taylor’s death. The city of Louisville, however, paid $12 million in October 2020 to settle a wrongful death suit filed by Taylor’s family.

In Oakland, Carson decried what he viewed as a racist act and called on the City of Oakland to help with repairs while community groups and a Burlingame lawyer quickly raised more than enough money to cover those expenses.

“After spending months creating this artwork it was incredible to see the community and neighbors taking photos and enjoying it,” Carson wrote on his GoFundMe page. “Now I am devastated and enraged to see it in pieces. This was an act of racist aggression and we need to show them we will not stand for it.”

The artist says the thieves won’t stop him and that he’ll rebuild, but he called on the city of Oakland to step up as well.

“This vandalism is an act of racist aggression, and it shows why sculpture and art matters,” he said. “I made this sculpture to support the Black Lives Matter movement, and while I’m overcome with rage and sadness at their cowardly act, their vandalism will make her even more potent.

Upon learning of the vandalism, Joe Cotchett of Burlingame’s Pitre & McCarthy, LLP was livid and offered to pay the entire cost of the repairs. “It’s scandalous and outrageous that anybody would do such a thing,” he said. Citing the circumstances of her death, he said “the whole situation is preposterous — first her death, and now this.”

At press time, more than $11,000 had been raised and the sculpture can now be replicated, this time in bronze. It was also speculated that the sculpture would instead be housed in a local museum.

A police report has been filed and the Oakland Police Dept. is investigating the vandalism and theft.