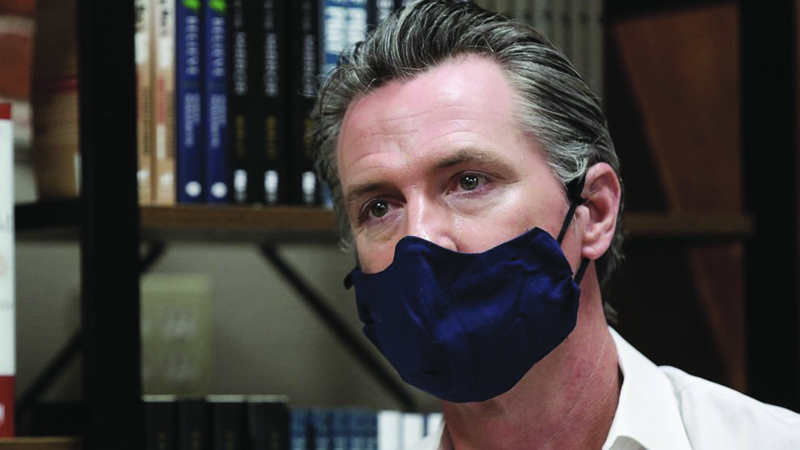 California is determined to stay on a path to a brighter future and, “won’t change course just because of a few naysayers and doomsdayers,” said Gov. Gavin Newsom in his third State of the State Address as he reflected on California’s year-long battle against the COVID-19 pandemic and the economic instability it has caused.

“This is a fight for California’s future,” Newsom said. “With more compassion, empathy, and connection, we can write the next chapter in the California story.”

Newsom delivered the remarks at Dodger Stadium in Los Angeles, which is doubling as a mass community vaccine site.

California was the first state in the nation to launch mass vaccine sites in partnership with the Federal Emergency Management Agency (FEMA) to dull the impact of the coronavirus crisis in California.

Newsom says the stark reality of the deaths of nearly 55,000 Californians since the pandemic began in early 2020 helped prompt the high level of  state investments to help people move past the difficulties and build an economy that will be stronger and fairer than it was pre-pandemic.

“Our journey back must also be a path to close inequities. There is no economic recovery without economic justice,” said Newsom.

Since California began its effort to get COVID-19 shots in the arms of people, the state has been ranked sixth for vaccine distribution worldwide. Healthcare workers have administered more than 11 million vaccine doses to Californians, including 200,000 educators, school staff, and childcare workers.

“We don’t just talk about vaccine equity — we designed our entire system around it,” said Newsom.

“I agree with Governor Newsom that California will come back stronger and wiser. We will not only have economic recovery but also economic justice,” said Assemblymember Mike Gipson (D-Carson), chair of the legislative Democratic Caucus.

“And, just like our response to the pandemic, we will follow science and data. There is light at the end of this tunnel and the best is yet to come,” he said.

Toni Atkins, President Pro Tempore of the California Senate, said fiscal policy lawmakers have helped to “prevent major cuts during the pandemic and restore funding that was in jeopardy.”

“Too many people are still just barely hanging on,” Atkins said. “They need us to do more.”

Lieutenant Governor Eleni Kounalakis, said a top priority is to ensure that essential workers, who are among the 18 % of vaccinated Californians, have enough support to tackle the final stretch of the pandemic.

“We can all breathe a little easier, knowing that the most vulnerable among us, especially in underserved communities are safer, and safer with each passing day,” said Kounalakis.

State officials said although there were a few hits-and-misses in the early stages of the pandemic, they are learning from their mistakes to work toward the safe reopening of the state.

Polarized discussions about health equity have surrounded much of Newsom’s efforts as the state has taken steps to shore up a weakened economy, reopen schools against spirited pushback from large unions, and distribute vaccines to as many people as possible.

Because many essential workers are Black and Latino, some critics say  state efforts to increase employee wages and advocate for vaccine equity have been neither timely nor forceful enough.

Newsom said lawmakers are working on raising the minimum wage to $14 an hour. In response to California’s health disparities, vaccine equity is the right thing to do and the fastest way through the pandemic, he said.

According to state officials, the number of recorded coronavirus cases has dropped from over 50,000 cases to less than 3,000 per day. The rate of hospitalizations has also reduced by more than 80 % since early January when infection numbers peaked, said state officials.

Despite the governor’s efforts to lead initiatives aimed at turning around the devastating effects of the pandemic, a budding movement to recall him spearheaded by Republicans is gaining traction.

“The celebratory press conference on the schools bill has not been matched with actions to actually get our kids back to school,” said Sen. Patricia Bates (R-Laguna Niguel), referring to a briefing the governor held last week announcing his plan to reopen schools across the state.

“In fact, the state this week denied the San Dieguito Union High and Carlsbad Unified School Districts in my region the chance to reopen their middle and high schools for in-person instruction, even though the districts’ applications to re-open had received the county public health officer’s approval,” Bates continued.

Newsom says he will not let his detractors cause him to lose focus.

“We will not be distracted from getting shots in arms and our economy booming again,” said Newsom, responding to critics “who are promoting partisan power grabs and outdated prejudices.”