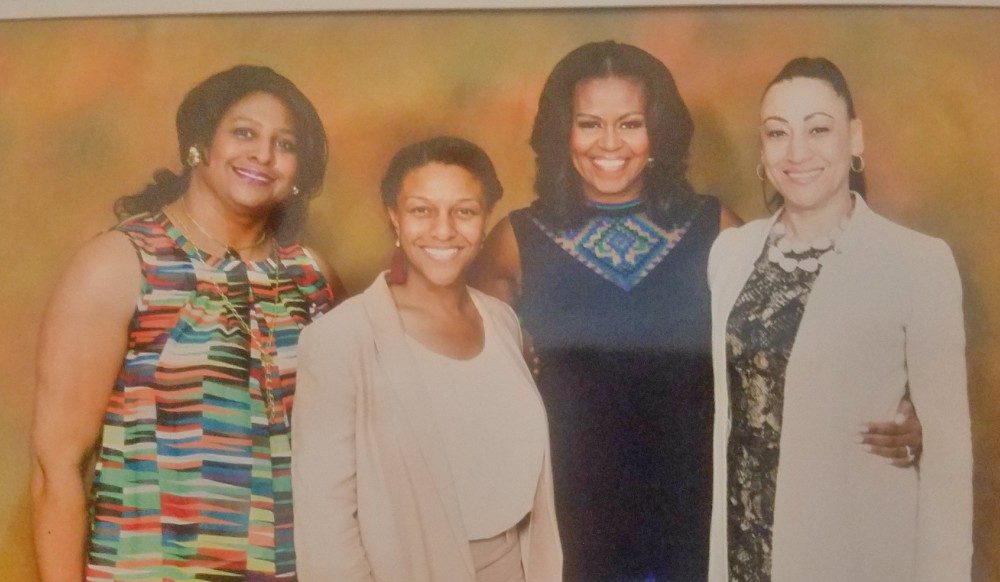 Presented by Unique Lives and Experience and sponsored by Claremont Hotel and Spa, Obama breath of fresh air as her transparency, down to earthiness and resilient spirit resonated with many in the arena.

Obama spoke of raising a family in the White House, the decision to support her husband’s candidacy and presidency and what life was like prior to the White House.

Stacy Brown-Philpot, while moderating took a moment to let Obama know just how special she was.

“You helped so many black girls and women walk taller and dream much bigger” she said.

When asked how she maintains her authenticity, Michelle stated she’s the same person on stage, back stage and serving the White House.

“I’m authentic-me wherever I am and I’m proud of my story in my voice,” she said. “It’s so much easier in the public eye when you’re not pretending.”

Obama spoke with pride on being born and raised on the south side of Chicago born and raised by her parents Marion and Frazier Robinson, neither of which had a college degree.

“My parents were hard-working, led by their values and used common sense and foresight for our education.”

The Princeton and Harvard Law grad, said having to console families after tragic losses were the toughest times for her. “In order to get through those times, you have to take yourself out of the equation because it’s not about you, you are there for the families,” she said.

When discouraged, Mrs. Obama said she sought the company of children. “I’d ask to be taken to visit some children or a school.” Hosting the full production of the musical “Hamilton” and events with performers like Common and Jill Scott were highlights for her.

“The wealthy are always invited to events at the White House but we saw the kids at the gate that never get to see themselves walking into the White House, those were the ones that we invited to our receptions and events. We hosted events because we knew that it had never been done and it will probably never happen again,” she added.

Obama joked about raising children in the White House and having to pretend that it was normal to have a 20 car motorcade a 20 car motorcycle escort and sharpshooters on the roof of their daughter’s school during parent-teacher conferences. “’Malia was like really Dad.’” “We really worked at creating a sense of normalcy, love and consistency in order for them to handle the extraordinary treatment.”

After a whirlwind trip to the Vatican and meeting the Pope with pomp and circumstance, a very young Sasha wrote about her summer experience. ‘I saw the pope and a piece of his thumb was missing.’ “The statement ran all through the school bulletin board”, she laughed. “We still don’t know what it was, but from a child’s perspective, that was a highlight for her.”

In light of current times Michelle says everyone should be empathetic. “If everyone did the same for other kids as they did for their own the country would be much farther.”

Obama spoke of how she loves people and people give her energy and advises everyone to find their passion, explore and seek joy and happiness, not perfection. She assured the audience that running for office was not in her future.

Grateful to have had a posse of close supportive girlfriends Obama said “the sisterhood makes the journey worthwhile.” “As Black women we are very good at taking care of others but not always ourselves so I encourage professional women and all women to support each other.”

Obama says she there’s a need to bring more women to the table. “I’m on my 5th career and it’s lonely out there. Women are still far and few in between. I encourage people with seats to leverage your own power to make sure others get there. We must take risks, not get too comfortable and be uncomfortable, that way we don’t have to continue to explain to the future generations why misogyny and inequity still exist. If everyone at the table looks like you -that’s a problem,” she said.

A lucky few had the opportunity to not only meet Obama but receive a hug and briefly speak with her in addition to a group photograph. Civic leaders and politicians such as Ken Houston, Keith Carson, Abel Guillen, Larry Reid and Buffy Wicks, Jennifer Madden and June Williams were in attendance. Students from the East Oakland Youth Development Center also had the opportunity meet the former First Lady, thanks to Congresswoman Barbara Lee.

Obama is currently completing her book, which is expected to be released this November.

Sadly, despite calls for political leadership, Obama made it painfully clear that she would not seek a political office in the future.

“I want to support more people with a moral compass that are ready to run. And we must all tap into the goodness in us and not the fear that divides us. Do that and vote,” she said.

State of Black Education in Oakland Kicks Off at Kingston 11

Winnie Madikizela-Mandela, South Africa’s  ‘Mother of the Nation,’ Dies at 81