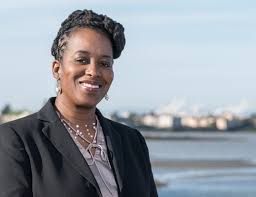 Although the votes are still being counted, Jovanka Beckles’ campaign is confident she won her seat for the AC Transit Board of Directors in Ward 1. She had challenged Joe Wallace, a 20-year incumbent.

In a letter to her supporters on Wednesday, she said, ‘We won!”

She went on to thank her donors supporters who spent ‘countless hours’ volunteering for her campaign.

And characterized her victory a one “for working people and our public transit system. We said “NO” to service cuts, wage reductions and layoffs, and demanded expanded service.

“We demanded free masks and sanitizer to make buses safe for workers and riders. We demanded that we treat public transit like a human right and get rid of bus fares permanently,” she wrote.

Further demands by her campaign support a Green New Deal for the East Bay and a call to reclaim wealth from corporations and the ultra-rich and invest in public services and public union jobs — starting with transit.

Beckles gave credit to labor unions, progressive activists, and ordinary working people across the Bay and the country who came out in support of her vision for the people. “That’s why we won, and I’m so grateful to all of you for your support.”

But the fight does not stop now, she said. “We’re going to need to put massive public pressure on the rest of the AC Transit Board and on local and state legislators to win taxes on the rich, to fund the public transit system we deserve.

“We need to support the ATU workers should they go on strike to stop givebacks.

Let’s celebrate our victory — and then get back to work to win transit for the people!