Giants lose, Dodgers one win away from clinching
Advertisement 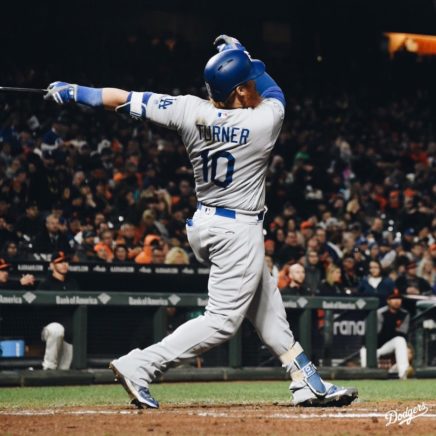 San Francisco, CA  – Giants were unable to stop the Dodgers from getting closer to the postseason.  After San Francisco lost 3-1 last night, LA is one-game away from clinching at AT&T Park.

Not the ending anyone wanted but San Francisco will wrap up another disappointing season.  However, they still have a chance to spoil the Dodgers hopes on becoming the second Wild Card in the National League.

With only two games left in the season, LA is one game behind the NL West Colorado Rockies who remain in the lead, and two games ahead of the St. Louis Cardinals for the second NL Wild Card spot.

“If we win, good things are obviously in store for us,” Dodgers manager Dave Roberts said.

It was Justin Turner’s two-run homer that sealed LA’s victory over the Giants.  After tying the game 1-1 with Manny Machado’s RBI single in the third.  Madison Bumgarner gave up a two singles and a home run in the fifth before exiting in the seventh for the night.

Kike’ Hernandez leadoff with a single for three consecutive frames.  But his third hit in the fifth was followed by Turner’s two-run blast to give LA the 3-1 lead.  Good pitching followed for both clubs resulted in no runs for the next four innings.

“Just a fastball up and in,” said Bumgarner.  “It wasn’t terrible.  It didn’t get in as much as I would like.  But I’ve still beat him with that pitch quite a few times even with the spot it was.  He’s a smart hitter, made an adjustment and got to it.”

The Giants achilles heel tonight was five double plays.  Any an every opportunity that presented itself with runners on base resulted in hitting into a double play.  Austin Slater hit into two double plays.

“Gutty effort,” Bruce Bochy said.  “We just couldn’t get a hit.  You saw the double plays killed us, five of them.”

Bumgarner ended his season with 3.26 ERA and 109 strikeouts.  He finished the night tossing six, striking out six, walked one and allowed three runs.  Not the way you want to start the series but they have two more opportunities to beat the Dodgers tomorrow and Sunday.

Clayton Kershaw will take the mound tomorrow against rookie Dereck Rodriguez who will face the Dodgers for the first time.  While Kershaw looks for his first win against San Francisco this season.

Raiders get first win of the season against Browns in OT