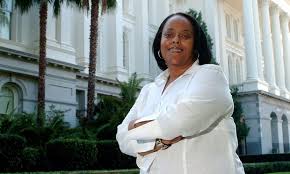 Federicka McGee, a Black woman and former statehouse lawyer to five Assembly speakers, was offered the position of executive director with the California State Bar Association and that offer was rescinded.

McGee has not commented on the situation to the media.  She is currently the vice president of California Government Affairs and Operations for the American Beverage Association. In her work for the Assembly, “She shepherded significant public policy related to judicial diversity, mortgage foreclosure safety measures, legal representation for unaccompanied undocumented minors, 1st Amendment protections for online reviews, and safeguards for victims of domestic violence,” her web profile says.

The situation was reported in the legal publication The Recorder.

According to The Recorder the president of the bar’s board of trustees called it an “evolving situation.”

Sometime in July McGee was offered the position of executive director of the State Bar of California.

McGee, a 1991 graduate of the University of the Pacific’s McGeorge School of Law, was negotiating the terms of the employment contract when the board of trustees withdrew the offer of employment.

In an e-mail to The Recorder spokeswoman Teresa Ruano said:  “As you know, the executive director search is being conducted by the board of trustees, with their meetings about it in closed session, and held confidential as a personnel matter.  For that reason, we won’t be commenting.”

Leah Wilson resigned from the executive director position in February and it has been vacant since that time.

Former Assembly Speaker Fabian Nunez was a reference for McGee to the Hawkins Company, a recruiter for the position.

The trustees met on Sept. 4 to discuss the executive director and the chief trial counsel positions. During a virtual Zoom public comment session, viewers spent more than an hour endorsing McGee.

Assemblywoman Shirley Weber, D-San Diego and leader of the California Legislative Black Caucus said, “[w]e were concerned as we looked at this because we’ve had a tremendous experience with Mrs. McGee.  We’re asking you to reconsider what has taken place.”

Board president Alan Steinbrecher acknowledged the comments and read a statement noting the bar’s commitment to diversity and that the two past executive directors, Contra Costa County Judy Johnson and Leah Wilson are Black women.

The trustees then went behind closed doors to discuss the two positions and made no comment.

The next scheduled meetings are for Sept. 24 and 25.