The United States military made history today when the Trump administration nominated Gen. Charles Q. Brown Jr. to become the chief of staff for the United States Air Force. If he is appointed and confirmed by the Senate, he would be the first African American to take on the role and become the highest-ranking officer in the branch.

Gen. Brown, widely known as C.Q, would be succeeding Gen. David L. Goldfein, who is expected to retire this year. Brown would be the first African American to lead any military branch since Army General, Colin Powell, who served as the first African American Pentagon leader. “I am truly honored and humbled by the nomination to serve as the Air Force’s 22nd Chief of Staff,” he said in a statement. “If confirmed, Sharene and I look forward to building upon the legacy of Gen. Dave and Dawn Goldfein and the many airpower giants before who have served our Air Force and our nation with such dedication.”

His duties would include overseeing all units in the branch, supporting a new Space Force program, in addition to sitting alongside the Joint Chief of Staff in the Department of Defense, the Homeland Security Council, National Security Council, and the president on all military affairs. He is currently serving as the commander of the U.S Pacific Air Forces and is a decorated fighter pilot with multiple combat tours in the Middle East, Asia, and Europe.

“The United States Air Force will be well served by the formidable talents of C.Q. Brown,” said Barbara Barrett, the Air Force secretary in a statement. “He has unmatched strategic vision and operational expertise. His leadership will be instrumental as the service continues to focus on the capabilities and talent we need to implement the National Defense Strategy.”

Related Topics:Black EnterpriseDana Givens
Up Next 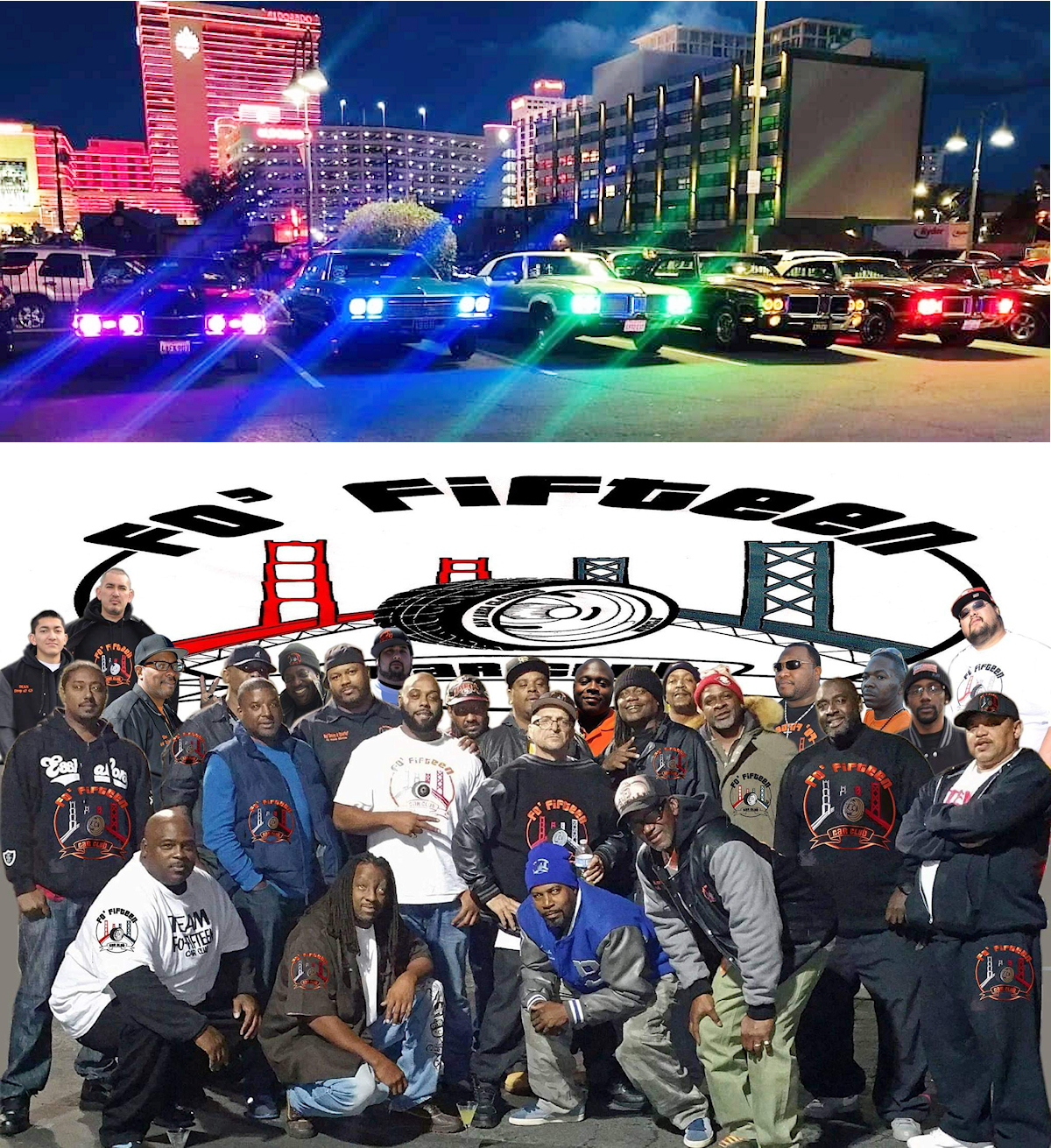 Performing Stars and Play Marin are presenting “Soulful Saturday,” an event on Sept. 4, 11 a.m. to 5 p.m., where the public can meet and greet visiting car and motorcycle clubs.

Soulful Saturday is a part of the Marin City Historical & Preservation Society launching the 80-year celebration of Marin City 1942-2022.

Marin County Covid19 Safety Rules will be in place. A mobile van will be available to provide Covid19 testing and vaccinations.

Suh spoke at the 2017 Women’s March on Wash., D.C., and has also appeared as a media commentator for the New York Times, Washington Post, MSNBC, NPR, and other news outlets. 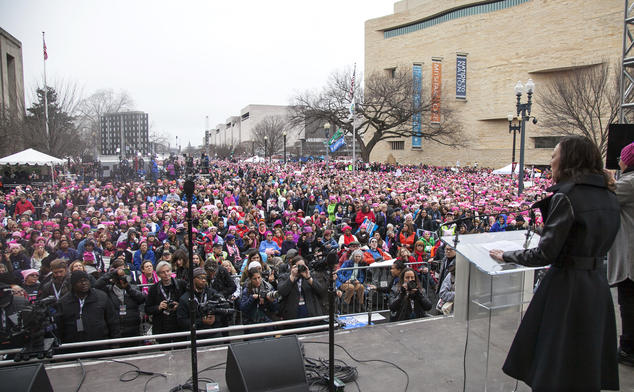 Rhea Suh rallies the crowd at the Women March on Washington, D.C.; Photo Courtesy of NRDC

Rhea Suh, who was the past president of the Natural Resources Defense Council (NRDC) from 2015 to 2019, has been hired as the president and CEO of the Marin Community Foundation (MCF).  Dr. Thomas Peters, MCF’s longstanding president, announced his retirement in June 2020. Suh was selected in June of 2021 and will assume the position on Sept.  7, 2021.

According to the MCF’s press releases, Suh was born and raised in Boulder, Colo., by Korean immigrants who left the country after the Korean War. Suh’s father, Chung Ha Suh, worked as automotive engineering specialist at the University of Colorado at Boulder, and her mother, Young Ja Suh, was a homemaker. She also has two sisters, Betty and Maggie.

Suh graduated with a bachelor’s degree in environmental science from Barnard College of Columbia University in 1992. While a student at Barnard, Suh taught earth science at Stuyvesant High School. After receiving a Fulbright fellowship to South Korea where she studied environmental movements, she attended Harvard Kennedy School and earned a master’s degree in education, administration, planning, and social policy. Her graduate school project focused on helping the U.S. National Park Service by establishing a formal education program at schools around the country.

Suh served as the assistant secretary for policy, management, and budget at the U.S. Department of the Interior from 2009 to 2014. She was nominated for this position by former President Barack Obama and confirmed by the Senate in 2009.

She successfully developed a diversity program for the National Park Service and the U.S. Fish and Wildlife Service and guided the Administration’s successful effort to have the Native Hawaiian community become a federally recognized tribe. This allows them to have a government-to-government relationship with the United States, with the responsibilities, powers, limitations, and obligations attached to that designation, and is eligible for funding and services from the Bureau of Indian Affairs.

Suh also worked at the David and Lucile Packard Foundation where she developed a $200 million program dedicated to environmental conservation and clean energy in the West and helped to establish the first-ever collaboration among nonprofit organizations to coordinate conservation efforts across the Colorado River Basin.

Rhea was the president of the NRDC from 2015 to 2019. The organization grew to more than $50 million and increased its membership by more than 40%. She led nearly 500 scientists, attorneys, and policy experts and made NRDC one of the country’s most effective environmental action organizations. She led the creation of a 10-year strategic plan, reorganized the NRDC, helped steer the discussions that led to the historic global climate agreement in Paris.

Suh championed the settlement for the residents of Flint, Mich., regarding the drinking water crisis.

Suh spoke at the 2017 Women’s March on Wash., D.C., and has also appeared as a media commentator for the New York Times, Washington Post, MSNBC, NPR, and other news outlets.

Eveta Jackson, 37, has been chosen as a co-principal to oversee Bayside Martin Luther King Jr Academy in Marin City. 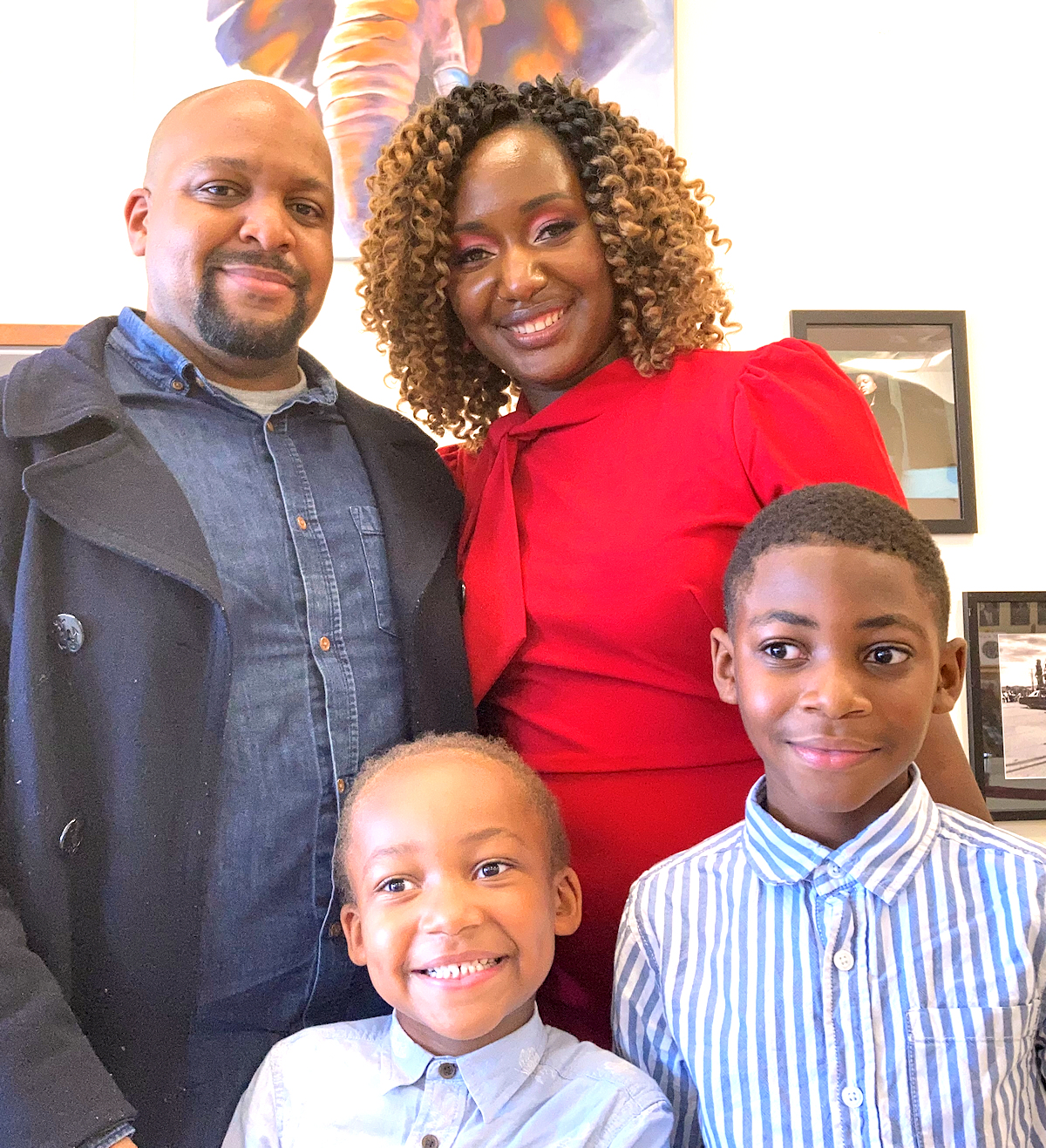 Eveta Jackson with her family. From left to right: Joseph and Eveta Jackson, Judah and Ezra. Photo courtesy of the family.

Eveta Jackson, 37, has been chosen as a co-principal to oversee Bayside Martin Luther King Jr Academy in Marin City.

(The other co-principal is David Finnane who will oversee the Willow Creek Academy in Sausalito.)

Jackson, who taught English at a middle school for eight years and served as the assistant principal at Montgomery High School in Santa Rosa for one year, was approved by the Sausalito Marin City School District board this week after a wide search involving three rounds of interviews.

“Some of Jackson’s many strengths are in multi-tiered systems of support and restorative justice, COVID operations and Title IX compliance. She is also a very strong instructional leader,” SMCD Superintendent Dr. Itoco Garcia told the Marin Independent Journal.

Marin City welcomed Jackson on the afternoon August 8, 2021, with a luncheon at the MC Arts Gallery in Marin City.

People came up to introduce themselves to Jackson. Oshalla Diana Marcus was the first and talked about her Gallery, and how we need to come together as a community. Other community members included Ayanna Morgan Woodard, Nancy Johnson, Alexis Wise, Sharika Gregory, Terrie Green, Florence Williams, Ricardo Moncrief, Dr. Shirley Thorton, Lisa Bennett, Bonnie Hough, Yasmine McGrane, Chantel Walker, Bettie Hodges and others.

Pastor Jonathan Logan spoke and shared about how he knew Jackson for 32 years from when she was a little girl. Logan and Jackson’s father-in-law, Rev John Jackson of Santa Rosa, are best friends and both shared many things together, such as preaching in each other churches, and time with each other’s family.

Logan said that Jackson is an “outstanding individual in everything that she does,” and that “Marin City will be tremendously blessed with her presence here.”

Jackson thanked everyone, the community and the whole process. She was impressed that the questions that were asked during the interviews show that Marin City is far down the road in terms of the equity in the schools, and that the education theory is actually happening here. She wants to honor the work that the community has put in the schools. She said she feels like a bridge to unify the two communities of students and staff together because of their commonality. She wants the students at the two campuses to be connected, to feel they belong to a community because they have much in common, and to engaged with each other in their classes.

She feels great to partner with Marin City, but she can’t and won’t do it alone, and desires the help and participation from the community.

Indie B closed the program with a song.