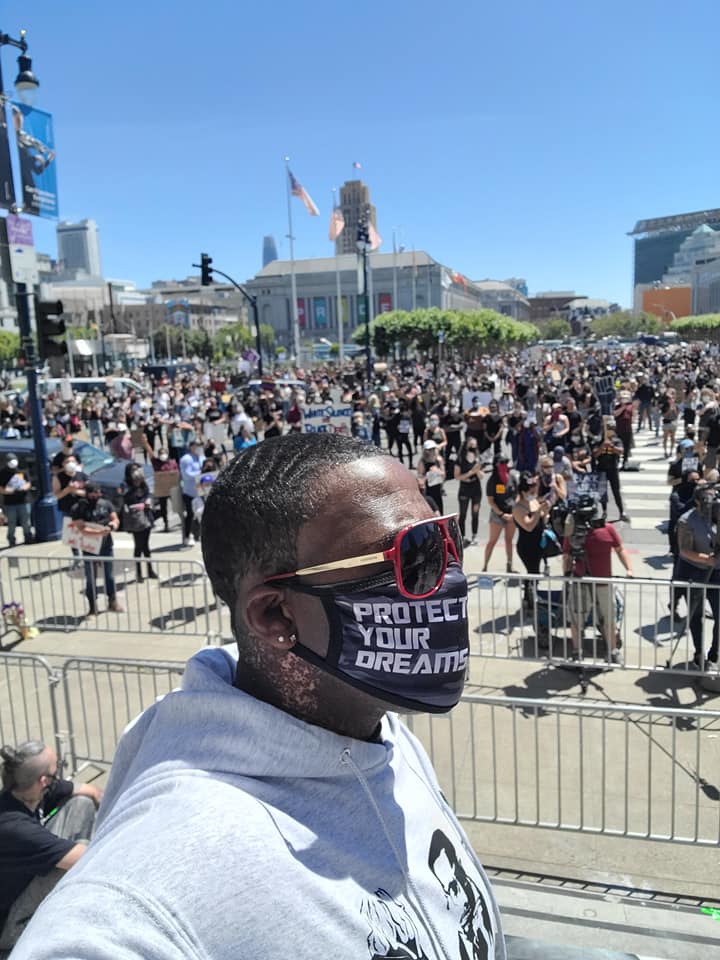 One of the speakers at the celebration of life for George Floyd seen in the foreground of the event at S,F. City Hall. Photo Courtesy Wealth and Disparities in the Black Community – Justice 4 Mario Woods.

About 1,000 people who came to the plaza in front of San Francisco’s City Hall on Tuesday got more than a typical rally for George Floyd, a Black man killed by Minneapolis, Minn., police two weeks ago.

The Kneeling 4 Justice Part 2 – Memorial for George Floyd organized by Wealth and Disparities in the Black Community – Justice 4 Mario Woods, led by its founder Phelicia Jones included prayer and a eulogy for Floyd.

Wealth and Disparities in the Black Community have been fighting for justice for Black people since the 2015 killing of Mario Woods by San Francisco police.

The event was presented as a Socially Distanced Protest asking participants to wear gloves and masks that were provided for those who didn’t have them.

Jones timed the event to coincide with Floyd’s funeral, which was held in Houston, Texas. Floyd’s death on May 25, 2020, set off a worldwide protest on police brutality and systemic racism.

She wanted people to experience the way the Black church would honor Floyd, which includes memorial and a celebration of his life.

San Francisco Mayor London Breed also spoke at the event. “Yes, I am the mayor of San Francisco, but I am a Black woman first,” she said, her voice halting at times. “And I struggle with the pain every time this happens. So it’s not just George Floyd: it’s my cousin Charles Breed, Eric Garner, Mario Woods.

“I see my family, friends and community time and time again continuing to be destroyed. I got into office so I could change these things,” she said.

They then all kneeled for eight minutes and 46 seconds, the time Floyd lay on the ground under the knees of the Minneapolis police until he died.

Gwen Woods closed out the event. She is the mother of Mario Woods, who was killed Dec. 2, 2015, in San Francisco in a hail of bullets by six San Francisco that was caught on tape. Former  District Attorney George Gascon declined to file charges.

Jones told the crowd that on this day, Floyd was finally at rest and the attendees should honor his memory and rest as well. “Go home. Or go to the beach,” she advised them.

Then Jones insisted that the DJ put on some music so people could dance. Within minutes, the crowd had organized itself into a massive ‘Electric Slide.’

Miki A. of Fairfax, California, Marin County, said, “I feel like it was important to be here today. I drove out from Fairfax this morning to be here. The mayor’s speech was amazing and

“It’s nice to see so many white people out here and so many people with anti-police signs. Things are definitely amazing out there” sad Sasha Saeed of Berkeley.  “You are seeing Asian-Americans, Filipino-Americans, Latino-Chicano voices come out in support of Black people and Black lives. It shows that this represents different kind of movement….”

S.F. Newsfeed contributed to this story.