Visualize it: that’s how big your home is. Back against the wall, three-and-a-half steps until you can’t go anymore. Arms straight out at your sides, fingers touching both walls, cement floors. Hardly a palace.

Now you head outside any time you want, day or night, to do what you want to do. But picture bars on your doors and someone telling you when to eat and when to sleep.

Then grab the new book “Prison Noir,” edited by Joyce Carol Oates, and read other tales of doing time.

Imagine the difficulty of choosing the best 15 of a hundred exceptional prison stories, a challenge that faced author-editor Joyce Carol Oates in pulling this book together. That the entries she read were “well-crafted” should be no surprise; after all, each of them was written by someone who is or has been in prison, which lends a “disconcerting ring of authenticity” to tales like these.

You know if you’ve been incarcerated, for instance, that having cellies can be a thorny issue, but in the first story, “Shuffle” by Christopher M. Stephen, even segregation doesn’t mean “true solitary confinement” anymore.

Yes, roommates and block mates can be trouble – but they can also keep a person sane, as in “I Saw an Angel” by Sin Soracco. Conversely, as in “Bardos” by Scott Gutches, the person two cells down can make you really think – especially when he’s dead just shy of his release date.

In prison, there is no privacy. There is no escaping the sound of the echoing clink of “hundreds of doors closing at the same time.” There can be language barriers that lead to huge misunderstandings. In prison, as in “Milk and Tea” by Linda Michelle Marquardt, there are people just trying to get by and get beyond a crime that surprised even them. And behind bars, there’s danger – not just to others but, as in “There Will Be Seeds for Next Year” by Zeke Caliguiri, there’s danger to the inmate himself…

In her introduction, Joyce Carol Oates says that there were some stories in this anthology that she read multiple times, and she admits that there were others she didn’t quite understand. She calls them “… stark, somber, emotionally driven… raw, crude, and disturbing material…”

And she’s right. But she forgot the word “riveting.”

Indeed, it’s hard to turn away from what you’ll read inside “Prison Noir.” There’s sadness here, frustration, resignation, and a surprising sense of slyness. You’ll find fiction, perhaps, or maybe it’s all real – possibilities of which you’ll squirmingly have to remind yourself.

Either way, the fifteen contributing authors didn’t seem to be holding anything back which, for the right reader, can be some powerful seat-glue.

Beware, before you pick up this book, that it’s filled with exactly what you’d expect from prison literature. I enjoyed it quite a bit, but I wouldn’t begin to call it nice.

With that caveat in mind, I think that no matter what side of the bars you live on, “Prison Noir” is worth doing time with.

Over time, if our kids are not able to relax and de-stress, their bodies may also react with headaches, stomach aches, rapid heart rates, and an overall feeling of unwellness. 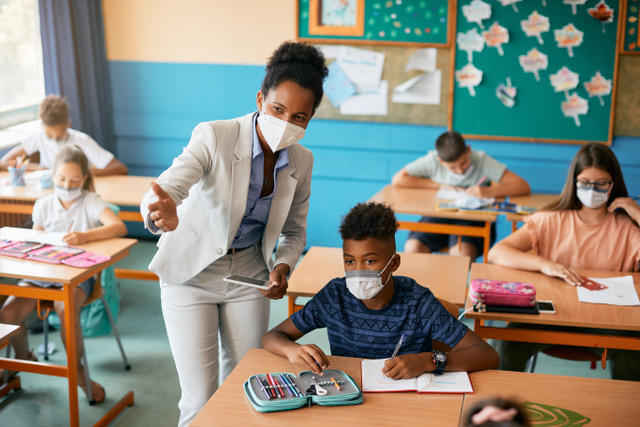 African American teacher assisting her students during class at elementary school and wearing face mask due to COVID-19 pandemic.

Our children are our most precious resource.  They hold in their hands the future of our community, our state, and our nation.  Likewise, we must hold them, too, under our protective guidance as we shape them into responsible and caring adults.

Now that most of our students have returned to school after an unusual, unpredictable and challenging 18 months due to COVID-19, many of our children are experiencing emotional upheavals due to – or exacerbated by — the pandemic. It is going to take some work to get children used to the stability, structure and predictability after more than a year of remote learning, disrupted schedules, isolation, little-to-no contact with peers and missed milestones.

Some of our children and their families have experienced food insecurity, income losses, illness and death due to COVID or related traumas.  These factors and many more have contributed to rising rates of depression, anxiety, hopelessness, decreased motivation, irritability, and an overall loss of learning.

As the school year begins, it is important to remember that each child is unique, and each one will experience their transition back to school differently.  According to the American Psychological Association (2021), 81 % of Gen Z teens (those between the ages of 13-17) have experienced intense stress associated with academic learning due to the COVID-19 crisis.  Rates of depression and anxiety in African American youth have increased also. Rates of suicidal ideation are climbing among Black youth as well but remains highest among LGBTQ+ youth across racial categories.  Moreover, in September 2020, over half of 11-17-year-olds reported having thoughts of suicide or self-harm.

Children experience stress differently than adults.  Usually, stress resolves itself within weeks for most youth. For others, though, the stress may turn into anxiety and influence the child’s thoughts and behavior.

Here are some things to look for:  changes in mood (irritability, hopelessness, frequent conflicts), changes in behavior (little time with friends, increase in video chatting or texting), loss of interest in previously enjoyed activities, difficulty falling or staying asleep, and/or a change in appearance (personal hygiene).

Over time, if our kids are not able to relax and de-stress, their bodies may also react with headaches, stomach aches, rapid heart rates, and an overall feeling of unwellness.

So, what can you as a parent do to help your child?  Here are some recommendations.

Finally, we all must recognize the additional pressure placed on many of our students during the Black Lives Matter movement.  We must continue to actively advocate, support, empathize and listen to our children as they develop tools needed to face the challenges of life today.

Remember to keep the lines of communication open and reach out to a trusted expert such as your pediatrician or family care doctor.

Some licensed psychologists, including myself, offer screenings for depression, anxiety, hopelessness, stress, etc. as well as treatment with effective tools and strategies for success are available.

The merger is subject to regulatory and other approvals but is expected to be effective July 1 of next year. Mills College, once an all-women’s college, will then be gender-inclusive and known as Mills College at Northeastern University.

The merger was prompted by financial troubles brought on by declining student enrollment, Mills College President Beth Hillman said. She said the merger provides excitement, relief, and a sense of hope for what’s going to come next.

Faculty and staff will as a next step work together to develop the curriculum for undergraduate and graduate studies at Mills. Mills officials said the graduate and undergraduate programs will be relevant to employers and students.

Faculty and staff will also be collaborating on the development of a Mills Institute, which will promote women’s leadership and empower first-generation students, among others.

College officials said until the merger is complete, Mills will continue to be an accredited degree-granting college led by the current administrators. They said Mills in the coming weeks will answer questions and provide more information about the merger.

Northeastern and Mills will be working to tend to the financial needs of Mills, which may now be able to pay more competitive wages to faculty and staff.

Staff who are employed at Mills College on June 30, 2022, will become employees of Northeastern University following that date.

A judge last month blocked the merger between the two institutions and granted a Mills College alum and voting member of the board of trustees Viji Nakka-Cammauf access to information on the college’s financial condition.

At a hearing Monday, the judge ruled Mills College complied with the court’s ruling and allowed the board of trustees to vote on the proposed merger.

“Northeastern has consistently demonstrated that it respects and values the vital contributions that Mills offers, voicing strong support for integrating the powerful mission of Mills through the Northeastern network,” Board of Trustees Chair Katie Sanborn said in a statement. “The Board sees the merger as a positive step forward that will enable the legacy of Mills to endure.”

But Alexa Pagonas, vice president of the Board of Governors for the Alumnae Association of Mills College, said not everybody is happy with the decision.

“Many Alumnae and those in the Mills community are disheartened that the trustees decided to forego their fiduciary duties by blindly voting to approve this merger without a full and clear picture of Mills’ financial situation or a finalized term sheet as it relates to the deal,” Pagonas said.

“Dr. Viji Nakka-Cammauf will continue to do everything in her power to uphold her fiduciary duties to the entire Mills community and protect the legacy of the College,” Pagonas said. 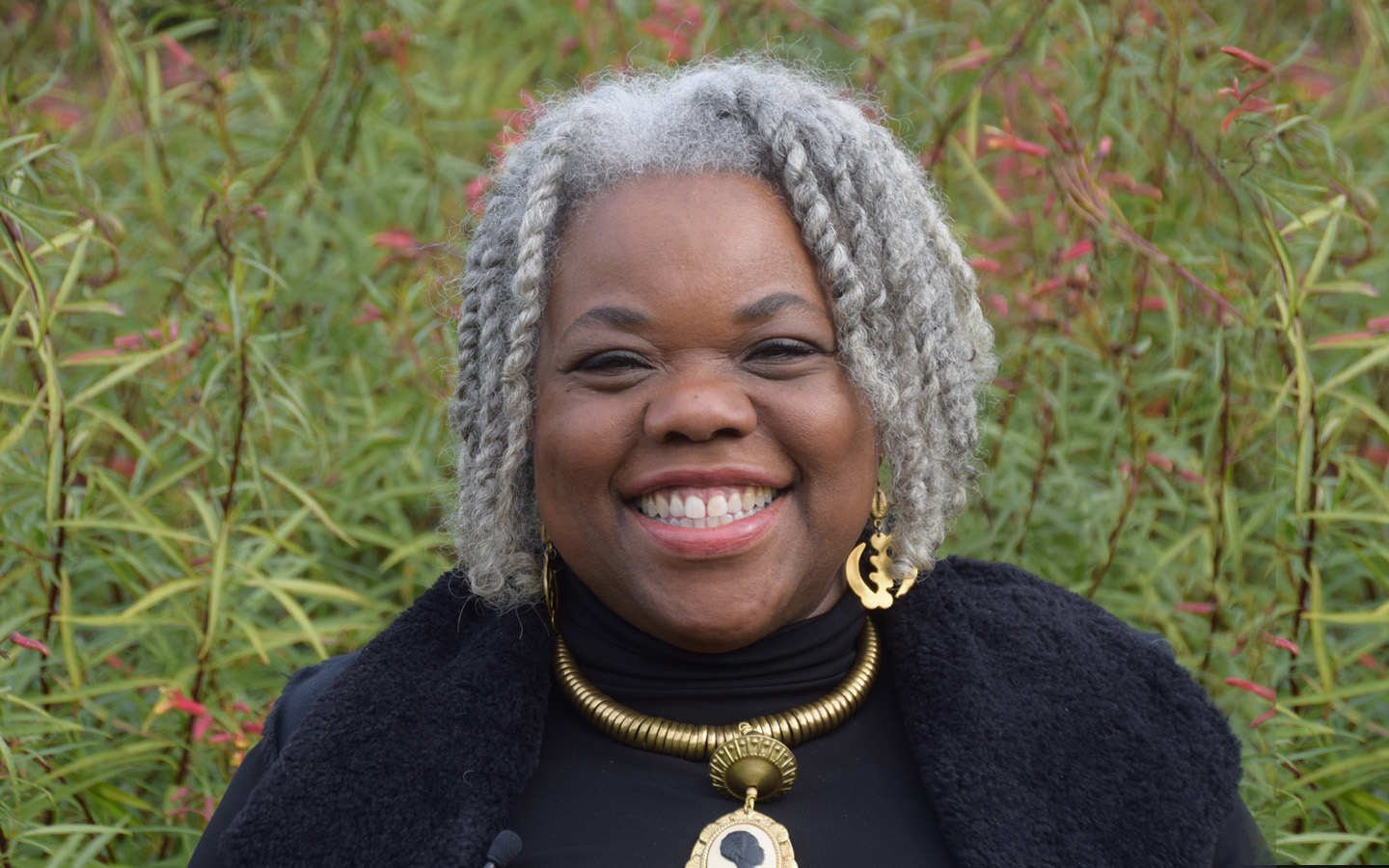 In her new role, Dr. Mayfield will spearhead work to develop partnerships with elected officials and government offices, community-based organizations, businesses, and foundations that provide meaningful opportunities for students and employers while raising the profile of the university.

“We couldn’t have found a more capable leader in the areas of external relations and strategic partnerships than Dr. Mayfield,” said HNU President Mike Groener. “As an educator, administrator, and activist, she lives out our founding mission in her work every day and understands the importance of values-driven, authentic, relationship building.”

Mayfield has a 30-year history with Holy Names University that began as a student in the University’s Multiple-Subject Credential program. After teaching in the Oakland Unified School District for 11 years and earning her Education Specialist Credential, Master of Education degree, and Doctorate in Learning and Instruction from USF, she returned to HNU to teach as an adjunct professor.