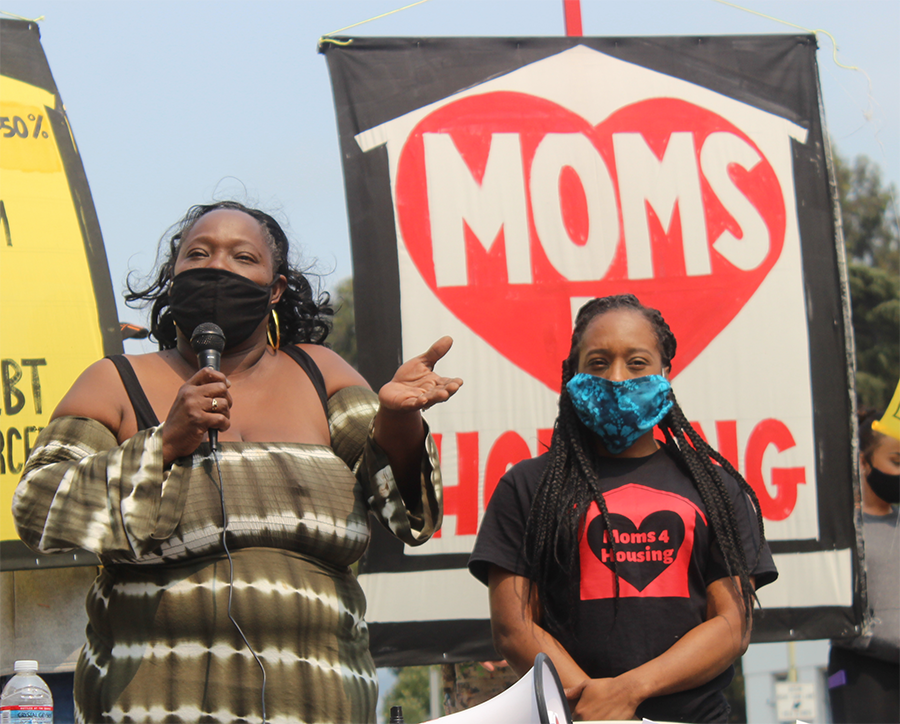 Barbara Doss (left) of The Ella Baker Center speaks gives a speech at the Board of SuperMoms Demands Homes Not Harm rally outside of The Alameda County Administrative Building in Downtown Oakland on Sept. 1. Dominique Walker (right) stands next to her. Photo by Zack Haber

Moms 4 Housing, a coalition of support groups and about 150 local residents gathered outside the Alameda County administration building in downtown Oakland on Tuesday to participate in a rally called Board of SuperMoms Demands Homes Not Harm.

“After voting to give this notoriously racist Sheriff’s Department a budget increase of over $100 million a year, the Alameda County Board of Supervisors has canceled their meeting set for September 1st,” read a Facebook invitation calling for supporters to attend the rally, which took place from 1:00 to 3:00 p.m. “We are in a crisis and this failure of leadership is unacceptable.”

Moms 4 Housing and supporters arranged a table outside of the building at 1221 Oak St. and spoke in a manner that emulated and played with the style of a county meeting.

Behind the table, supporters held signs painted in yellow, red and black. One sign outlined the four demands of the Homes Not Harm agenda: Defunding the sheriff by 30-50%; placing a moratorium on all evictions during the COVID-19 crisis; canceling all rent and mortgage debt; and permanently banning law enforcement from carrying out evictions.

While no current City Council members showed up to support the rally, Moms 4 Housing member Carroll Fife, who is running for office in District 3, as well as District 5 Council candidates Zoe Lopez-Meraz and Richard Santos Raya, were in attendance.

“We live in a police state that puts capital over human life,” said Dominique Walker, a founding member of Moms 4 Housing who spoke at the rally.  “The eviction of Mom’s house showed that.”

Walker, along with several other speakers referenced the militarized pre-dawn eviction on Jan. 14 when the Alameda County Sheriff raided a speculator-owned property that had long been left vacant and kicked out unhoused Black mothers and children who had taken shelter inside. The sheriff’s officers used tanks, drones, a battering ram, and assault rifles to enforce the eviction.

But celebrating her son’s life was difficult because the owners of her rented housing unit wanted to inspect it on the same day. After delaying the inspection, she said they sent her a threat that she would be evicted if she continued to delay the inspection. She characterized the housing in the area as “unfair” and shared fond memories of her son, who, starting at the age of 9, would feed unhoused residents in Oakland.

“He would take food underneath the ramp down at 29th street and we would feed the homeless,” she said. “That was something he wanted to do, believe me, I didn’t push him to do that. I love him for doing that.”

Speakers pointed out the same money that can be used to harm and incarcerate people could be used to provide housing. Others spoke directly to the need to cancel rent and grassroots efforts to organize tenants.

Tur-Ha Ak, of Community Ready Corps, spoke of the need for those fighting for housing justice and against the criminalization of dissent and police oppression to stand united with each other.

Pointing at the county administration building, he repeatedly said “this is the same system that killed Martin and Malcolm,” and emphasized that though activists might have disagreements about tactics, they all need to unite against the criminalization of dissent.