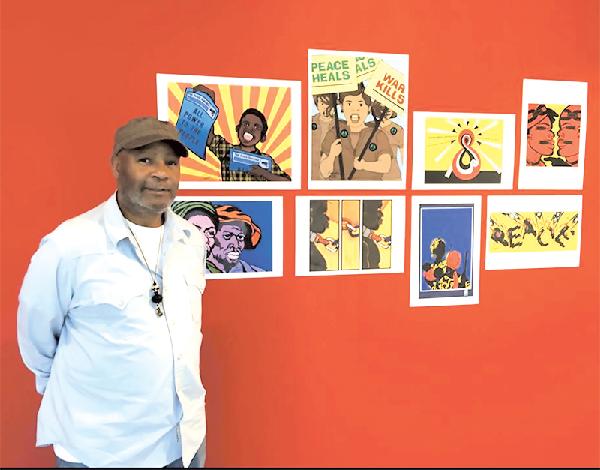 Graphic Artist Emory Douglas served as the Minister of Culture for the Black Panther Party. Douglas displays his artwork on tour in Auckland, New Zealand.

Graphic Artist Emory Douglas served as the Minister of Culture for the Black Panther Party, from the late sixties until its disbandment in the eighties. In doing so, he produced hundreds of illustrations that spoke to the times:  a shift during the Civil Rights Movement that centered on “Black Power” and self-sufficiency, steeped in the Party’s demands. While spreading their mission, the BPP produced a regular publication featuring “cartoons for the cause,” for several years.

As the main illustrator, Douglas created graphic illustrations that voiced the struggle for equality in housing, employment, opportunities and the fight against blatant police brutality in each issue. During the height of the resistance, the newspaper peaked at nearly 140,000 in circulation throughout the United States and beyond. Douglas was a part of the Black Arts Movement at City College and was recruited by the BPP founders, Bobby Seale and Huey P. Newton. The BPP recognized the rate of illiteracy in the community and wanted to ensure those that could not read the publication were still informed and Douglas’ skills were put on task.

By using his talent as a weapon against injustice, Douglas could portray in one caption and cartoon depiction, the desperation that plagued the Black community: a mother and her child with rodents in dilapidated housing, spoke to inequitable housing or a child with a raised fist, showed the communities strength. However, it was the pig in uniform that shouted out loud, the communities disdain for the rampant abuse and killings of unarmed Blacks at the hands of police.

Douglas, a humble and soft spoken man, pushed the envelope with every illustration as he and the BPP, unapologetically fought for justice and the right of future generations to affordable housing, access to healthy food and equitable schools.

While the media often depicted the Party as gun toting revolutionaries, Douglas says they sought to protect the community and began a breakfast school program for hungry children in public schools.
“We knew our families and children depending on us to take a stand and make much needed changes in the community,” said Douglas.

Douglas’ illustrations have been displayed throughout Australia, Canada, South and Central America. He often shares his historical involvement in the movement along with coaching aspiring artists and students at Yale University, the Rhode Island School of Design (RISD) and many other institutions of higher learning.

“My artwork was a reflection of the times we lived in during the struggle,” said Douglas. “I want to ensure that this generation knows the truth about our fight and that we fought to make a difference in our communities.”

His work is on display at Bay Area museums and the Smithsonian. A retrospective of Douglas’s graphic artwork titled: “Black Panther, The Revolutionary Art of Emory Douglas” provides a comprehensive collection of Douglas’s graphics from the 1960’s and 70’s. Douglas also collaborated with Australian Aboriginal artists.

While discussing his social justice artwork he shared the irony of how his artwork from 50 years ago mirrors America’s current adversities.

“It’s hard to believe that the very things we fought so hard for and the illustrations I created could very well apply to today,” said Douglas. “But on the other side, the world is ever changing and this new generation has the tools and hope to come together and bring about a change.”

Opinion: Stopping the Stadium Mega-Development Was an Important Victory, But Fight Is Far from Over