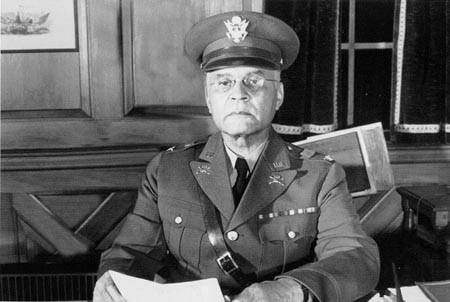 Throughout a career that began during a time when segregation was strictly enforced and the modern Civil Rights Movement was still in its infancy, Benjamin O. Davis Sr. (1880–1970) compiled an extensive and impressive list of accomplishments. He was a U.S. Army officer, and on October 24, 1940, became the first African American to rise to the rank of brigadier general. His son, Air Force General Benjamin O. Davis Jr., would follow in his footsteps.

Davis’ promotions to brigadier general, major, lieutenant colonel, and colonel were all preceded by the label “temporary.” This was the case for all Black military officers during that time, although there were only two or three.

Born in Wash., D.C., Davis’s army record and gravestone mark the year as 1877. Later, his biographer located a census document placing Davis’s birth year at 1880. He had falsified the date of his birth in order to join the military.

Davis’ father was a messenger for the Interior Department and his mother, a nurse. During high school he underwent cadet training. This experience led him to enter the U.S. Army in 1898, during the time of the Spanish American War.

He was then a temporary first lieutenant assigned to the 8th United States Volunteer Infantry, an all-black unit stationed at Chickamauga Park, Ga. The unit disbanded in 1899. The war had ended, but Davis’s military career was at its infancy. He reentered the army that same year. Davis began serving in the 10th Calvary (Buffalo Soldiers) as a private. Eager to advance, he rose to the rank of sergeant major within one year. Lt. Charles Young was stationed with Davis. The only Black officer in the military during that time, Young served as a mentor to Davis, encouraging him to seek an officer’s commission. In 1901, Davis received his first overseas assignment: the Philippines. He would return to the states the following year and his career began to soar.

Over the next 40 years, Davis would serve the military well. His appointments included professor of Military Science at Wilberforce University, military attaché in Liberia, and border patrol along the U.S.-Mexican border. He returned to the Philippines, where he was ranked temporary lieutenant colonel, but would return to the states as captain.

He also returned to Tuskegee and Wilberforce and would soon after take command of the 369th Regiment, New York National Guard. His rank would then rise to colonel, and on Oct. 25, 1940, would be appointed brigadier general. He was 60 years old.

As brigadier general, Davis was open about his support of desegregating the army, wanting to introduce full integration. He was appointed as special assistant to the Secretary of the Army (1947). The following year, he would retire from the military. He had served the United States for 50 years.

Davis was a minority within a minority in the professional military. Yet he made it his life’s mission: shattering barriers and opening doors. He passed away in Chicago at age 93.

Opinion – Coronavirus and Your Mental Health