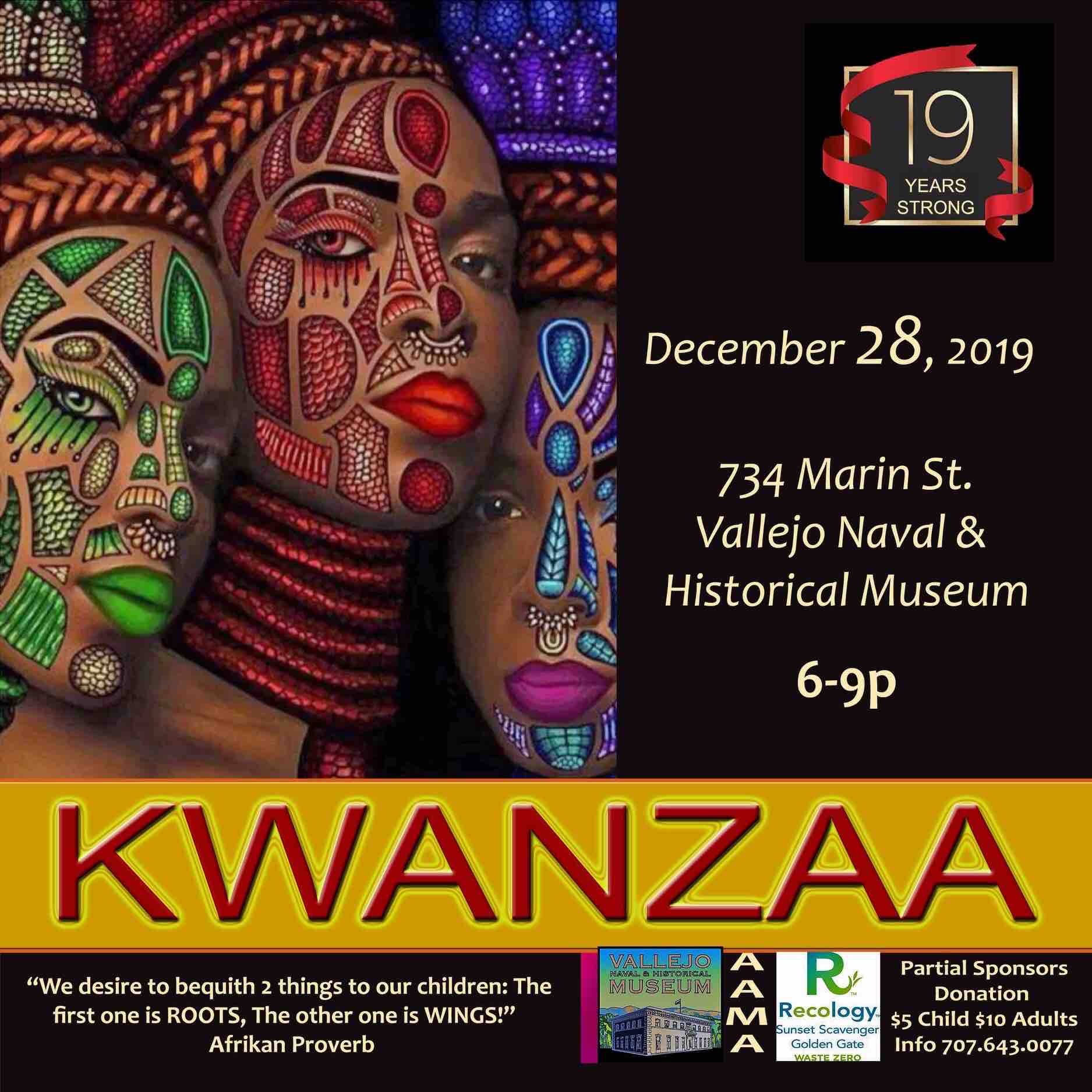 One of Vallejo’s annual community Kwanzaa celebrations, and the largest, will be celebrated on Saturday, December 28th at the Vallejo Naval and Historical Museum, 734 Marin St., from 6:00 to 9:00 p.m. The event will be presented by Askari T. Sowonde, who has coordinated the presentation for the past 19 years.

Kwanzaa is a week-long annual celebration held in the United States and other nations of the African diaspora in the Americas, to honor African heritage in African-American culture. It is observed from Dec. 26th to January 1st, culminating in gift-giving and a feast. Kwanzaa has seven core principles (Nguzo Saba), created by Maulana Karenga, and was first celebrated in 1966.

“I originally began the Kwanzaa celebration in my home and I did it for six years,” said Sowonde. “After that, I was approached by a friend who suggested that I offer the celebration to the entire community. Thus began this celebration where hundreds of Vallejo residents participate and join in the festivities.”

“I’m a grass-roots sista who has coordinated events in the community for years, providing local entertainment and educational activities for the community,” noted Sowonde. “Even though this event is not sponsored by the city financially, I’m able to provide programs such as this one through prayer and from the help of people who believe in what I’m doing.”

“This year however, because we are using a venue that is operated by the city, we will be charging $5 for youths and $10 for adults to attend,” Sowande said. “It’s actually a donation with proceeds going to support the cost of presenting Kwanzaa, and to the museum.”

“We will have speakers, entertainment, drummers and lighting of the candles by our youths,: noted Sowonde.  “Our theme is ‘Where Are We,’ which speaks to what is happening in the Black community.”

Notably, the Vallejo Kwanzaa will honor people who have given selflessly of themselves to benefit the communities they live in. Those honorees include: Philip “Maui Phil” Wilson, Miss Myla J, The MLK Project, Unite Vallejo (Keyauna Morris) and Eloise Quinn from the NAACP.

In addition to the lighting of the candles, there will be presentations by Distinctive Design, Semaj the Poet, Matthew McCain-Praise Dance, Sharon B-Steel Pan Drummer and a fashion show by Norahs Khan.

The theme speaks to a number of murders of youths in our community by police officers,” said Sowonde.  “The last murder was Willie McCoy, who was killed while he was asleep in his car at a Taco Bell restaurant. And there was Eric Reason who was shot in the back of the head while fleeing from a plain-clothes police officer. This has to stop.”

“We, as a people in the community, are outraged,” said Sowonde. “One of our speakers, Kori McCoy, the brother of Willie McCoy, will be speaking about the plight his family has endured and what has transpired since losing his brother.”

“We were warriors in Africa, and we’ve come to a point where we are standing up and saying ‘no more.’  That’s what this is about.  To educate, have fun, and talk about us as a proud Black people. It is what is reflected in this year’s poster…Blackness and Kwanzaa.”

For more information about the Kwanzaa celebration, contact Mz. Sowonde at 707.712.3699 or via email at iamblessed3204@comcast.net.

Related Topics:Clifford L. Williams
Up Next