It was fitting, Martin Luther King III said,to bring his 11-year-old daughter with him as he addressed a crowd of 75 last Sunday morning at Oakland’s Evergreen Cemetery where more than 400 victims of the massacre in Jonestown, Guyana, are buried in a mass grave.
“We are here primarily to honor the children who never had a chance to make their mark on the world,” King said as sun pierced the smoky air from the Camp Fire and bright-colored balloons tied to the railing around the memorial grove swayed in the light breeze.
While Alice Houston, a member of the original Clara Ward Singers, lovingly crooned “Yes, Jesus Loves Me,” the temporary marker was unveiled and children distributed flowers to later lay athe foot of the panels. 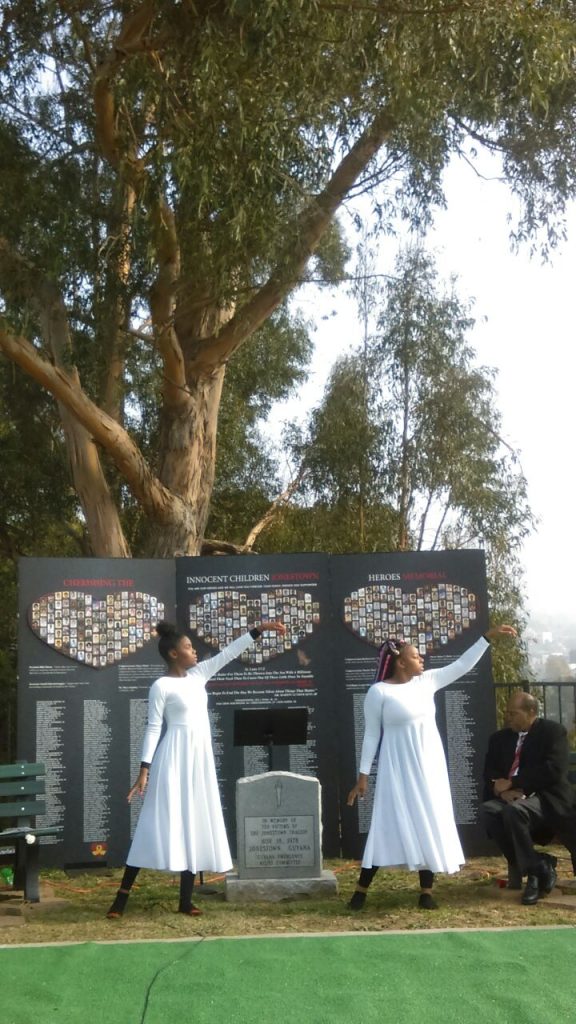 Makayla R. Davis and Marguerite Young of the Devine Angels of Greater Faith Ministries perform praise dance choreographed by Shakira Goff at the unveiling of special panels commemorating the youth who died in Jonestown.

King nodded to his daughter Yolanda Renee King before he went on to inveigh against the evil that robbed the 305 Jonestown children of their future and call for a society that should make “an uncompromising commitment to all children.”
Standing in front of the temporary wall with the names of all the victims and photos of the children arrayed within three hearts, King cited the continuing threat of gun violence against children,especially at schools. In the absence of legislative leadership, he called for communities to organize their own multicultural peacekeeping coalitions to protect the children and thereby secure the future.
It is King’s unrelenting dedication to peace that led Dr. Jynona Norwood, founder of the Jonestown Memorial Wall and Services, to invite him to the 40thanniversary and unveiling of the wall honoring the children.
These 40 years have been a long haul for Norwood, who lost 27 family members in Jonestown, the youngest two months old and the oldest 91 years old.
“Change has always been associated with the number 40,” Norwood said. Noah’s 40 days of rain. The Israelite’s 40 years in the wilderness and Jesus 40 days fasting in the desert. She noted other coincidences over the last year as she was finally able to take the action she thought the Jonestown dead deserved. “When they joined the People’s Temple, they did not join a cult,” she said, “they joined a church that became the cult of Jim Jones,” and they should be remembered separately from the man who brought about their demise.
Supported by Oakland’s previous and present mayors, Sen. Dianne Feinstein and Rep. Barbara Lee, it was in re-reading letter of support from Rep. Nancy Pelosi that inspired the commission of the temporary grave marker that honors the children as well as the other victims. Norwood, who is pastor of Faith In Ministry Church in Ingleside, Ca.,will bring the panels to Evergreen Cemetery each year but hopes they will ultimately find a permanent home, perhaps at the African American Museum and Library in Oakland.
Other speakers included Dr. E. Faye Williams of the National Congress of Black Women, Dr.Randal Maxey, Rev. Ed Norwood and representatives from Lee’s and Schaaf’s offices presented Norwood with awards of recognition and resolutions. In thanks for them standing by her all these years, Norwood, in turn, presented them with awards of recognition.
After praise dances by three teen aged girls, the service closed with the spirited singing of “Walk With Me, Lord,” by Louise Armstrong, 82, a member of Norwood’s church who also lost a cousin at Jonestown.