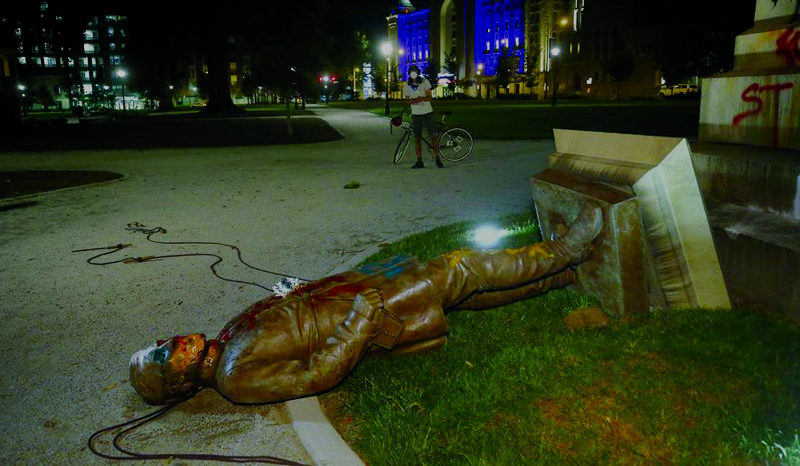 The protests of the death of George Floyd while in police custody n Minneapolis, Minn,, has sparked protests worldwide and resulted in change – both theoretical and concrete — as the movement enters its third week. Leaders nationwide quickly moved to change policing tactics and protesters took on racial inequities by defacing and/or removing statues and symbols celebrating the heroes of the slave-holding Confederacy.

Police accountability, use of force

• In California, where some chokeholds are already banned, Gov. Gavin Newsom directed police officers in the state to halt training on and use of the carotid hold, a type of chokehold designed to cut off blood flow to the brain. He will sign legislation banning carotid holds.

• In Minneapolis, Minn., a majority of City Council members have pledged to dismantle its police department and, pending approval by a judge, officials reached a tentative agreement with the state to ban chokeholds and insist that police to intervene  if they see another officer ‘engaging in misconduct.’

Cuomo has also indicated he would sign bills in development by the New York State Legislature that include a ban on chokeholds and new rules to make police officers’ disciplinary records transparent, both opposed by police unions.

• In Denver, SWAT teams must turn on their body cameras during tactical events, transparency on incidents where police point their guns at someone and chokeholds have been banned.

• City Council members in Wash., D.C. and New Orleans proposed banning the use of tear gas against protesters in their cities.

• San Francisco Mayor London N. Breed announced her vision to fundamentally change the nature of policing and that police would no longer respond to 911 calls that are not criminal in nature.

• Oakland Mayor Libby Schaaf announced with Chief Susan Manheimer a proposal to ban the use of chokeholds in Oakland.

• Los Angeles City Council intends to reduce the $1.8 billion budget of LAPD  by up to $150 million for the upcoming fiscal year. Those funds will be allocated to “disadvantaged communities and communities of color.”

• Displays of the Confederate battle flag in public and workspaces on Marine Corps military bases have been banned and the U.S, Navy will soon follow suit.

• The statue of Confederate Gen. Williams Carter Wickham in Richmond’s Monroe Park was torn down by protesters.

• Protesters at the University of Mississippi campus spray-painted the words “spiritual genocide” on a Confederate monument.

• A five-story monument to Confederate troops in Birmingham, Ala., will come down if the mayor has anything to do with it, even though the Alabama Attorney General is threatening legal action.

• Virginia Gov. Ralph Northam announced that he would take down another prominent statue of  Lee on Richmond’s Monument Avenue.

• NASCAR prohibited the display of the confederate flag from all NASCAR events and properties.

‘Everyone Must be Counted Once, Only Once in the Right Place’

As Numbers Spike, California to Begin “Smart Testing” for COVID-19