A’s Give Back to the Community

A's give back to the community

President Trump’s War on the Poor 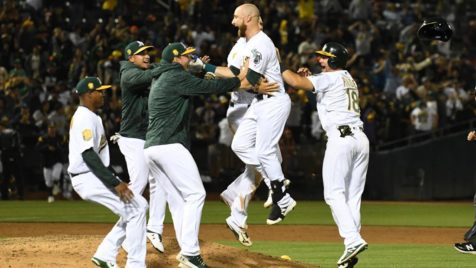 Oakland, CA – It was a night to remember, the A’s honored the 1989 Championship team and tied the series in walk-off fashion in front of a record breaking crowd.  The Bay Bridge series didn’t disappoint, the Giants forced extra innings and Jonathan Lucroy’s game ending single capped off a spectacular day at the Coliseum.

Oakland’s 4-3 win over San Francisco was reminiscent of the rivalry that began decades ago between these two teams.  The A’s took charge bottom of the eleventh with three hits off closer Will Smith.  The story book couldn’t have had a better ending.

After Smith forced the first two batters to ground out and pop up he gave up three back-to-back singles.  Matt Chapman and Chad Pinder singled on a ground ball then Lucroy followed with a single to center.  Lucroy threw up his hands and the celebration began.

“It’s fun being on the field for that,” Lucroy said.  “Any time you get that energy from the crowd, it really is a special time.  I wish we could do that every night here because it’s a lot of fun.”

Oakland hosted the largest crowd in Coliseum history (56,310) and in the Bay Area since the final game at Candlestick Park Sept 30,1999.  The Giants kept it interesting along the way.  They tied the game 3-3 in the ninth on a blown save, Alan Hanson struck out swinging but made it to first safely after a wild pitch by pitcher Blake Treinen.

The A’s challenged the (stadium boundary call) call on the recent play, and the call was upheld.  Hunter Pence doubled and Hanson scored.  Gorkys Hernandez walked, Steven Duggar had a chance to extend San Francisco’s lead but he flew out to end the inning.  The Giants never scored after that inning.

“It’s always been a little sketchy down there with the chairs being moved and guys sitting outside of that area and so forth,” said Oakland’s manager Bob Melvin.  “I was looking for some sort of interference, and the rule is unless it was intentional, you play it.”

The turning point of the game was when Madison Bumgarner lost his command on the mound in the fifth.  His lasted four plus frames, allowing two hits, three runs, six walks and five strikeouts.  Bumgarner’s streak of 89 straight games lasting five innings is over.  After walking in a run for the first time in his career, Bumgarner finished the night with more walks than strikeouts.

“The walks were key in that inning,” Melvin said.  “We got just enough to get a lead.  Obviously they came back and tied it up.  And then we got some big hits after that.  The key to that game was making him work and getting him out of there.”

Olson led off the frame with a walk and Chapman followed with a fly ball to right field.  Bumgarner walked his fourth batter, Pinder and loaded the bases with no outs.  Bumgarner walked the next batter, Josh Phegley and the A’s tied the game 1-1. Posey walked to the mound to chat with the southpaw who seemed out of sync.

The bases still loaded with no outs, Bumgarner walked Marcus Semien and his night was done.  Mark Canha grounded into a double play and Pinder scored.  Jed Lowrie walked and Khris Davis grounded out to third baseman Pablo Sandoval to end the inning.

“I just didn’t throw strikes, that’s it,” said Bumgarner.  “It doesn’t matter, I’m trying to get ahead, trying to throw strikes and put guys away fast and I just couldn’t do it there in the fifth.”

The Giants comeback was incredible, Trevor Cahill pitched a solid game until he gave up a home run to Brandon Belt in the fourth.  Cahill was knocked out of the game after giving up his third walk to Andrew McCutchen to load the bases in the sixth.  By the seventh, Posey’s RBI single made it a 3-2 game.

Oakland will close out the Bay Bridge series tomorrow at 1:05pm.  With the series being tied the A’s have an opportunity to take the series and win the Bay Bridge trophy for the season.  They beat the Giants before the All-Star break and look to continue that winning mentality.  Sean Manaea will face Johnny Cuteo on the mound.

The A’s honor the 1989 Championship Team