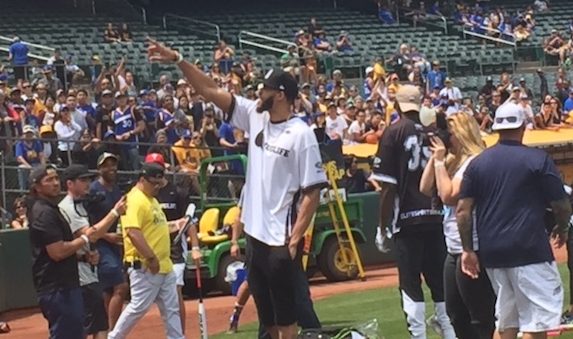 Oakland – It was a perfect time to come together for a great cause. Within the last two weeks the Warriors have won a NBA Championship, hosted a parade for the city then jetted off to Las Vegas continuing the celebration.

Today, the team gathered right across from Oracle for some fun in the sun. JaVale McGee’s 3rd Annual celebrity charity softball game was truly a family affair for his teammates, friends and fans.  A great turnout at the Oakland Coliseum for a the #JugLife Foundation.

The foundation promotes a healthy lifestyle by encouraging people to drink more water and encourage more exercise. Just a few feet away from where Golden State recorded their second championship in three years, the Warriors took over the Oakland A’s ballpark.

Finals MVP, Kevin Durant showed up in cupcake hat with a championship ring on it. But the laughter didn’t stop there, it was a good time by all especially the home run hitters, Rapper Mistah FAB, Matt Barnes and Ian Clark who did a backflip to celebrate. 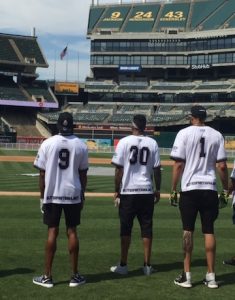 “I wasn’t really looking forward to seeing anybody personally,” McGee joked, “but the way Fabby (Mistah Fab) was hitting home runs was crazy.  Like it was (effortless).”

“Matt talked a lot of junk, so I was excited to see how he would play,” Draymond Green said.  “I predicted we would hit two home runs,” he joked.  “We had way more, we had like 10 so it’s all good.”

Barnes home runs traveled the furtherest reaching the left field wall.  While others just made it over the makeshift fence in the outfield.  Barnes surprising went yard a few times just like a professional baseball player.  Clark got the crowd going after he ended his home run with a back flip before reaching home plate.

#JugLife was a huge success, Team Draymond defeated  Team JaVale 19-15.  McGee hopes to resign with Golden State next season.  But in the meantime, the celebration continues.  The NBA will host its 1st Annual TNT NBA Awards set to air live in New York on Monday, June 26th.  Tune in to see if the Warriors bring home the DOY (Defensive Player of the Year) or Sixth Man Award.