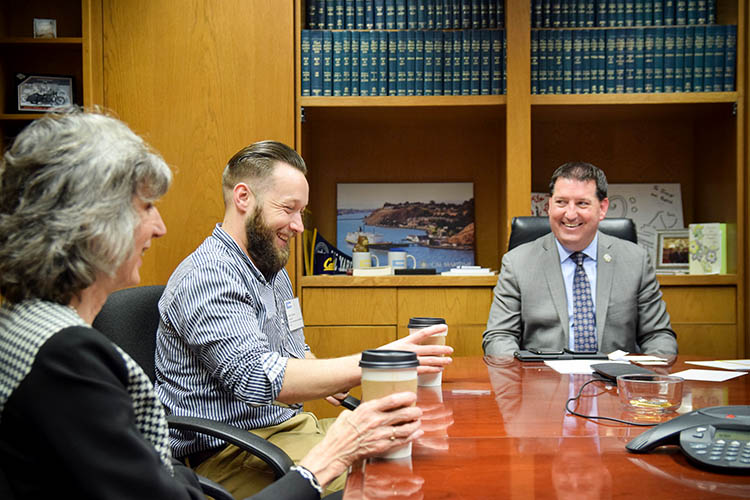 As UC Berkeley graduate students Nancy Freitas and Jake Duncan made their way recently toward the vaunted halls of the California State Capitol in Sacramento, they weren’t quite sure what to expect.

After all, the students’ fields of study are far and apart from the world of diplomacy, policy-making and political jousting.

Yet, there they were, part of a small Berkeley caravan participating in Graduate Research and Education Advocacy Day, which is designed to boost appreciation among state lawmakers for the quality, variety and impact of graduate research and education within the UC system. Representatives from each of the 10 campuses participated, and the visit to Sacramento marked 10 years since the program’s inception.

Duncan, whose work focuses on seismic performance of corrosion-damaged bridge columns, and Freitas, whose research includes impacts of temperature increase (due to climate change) on Arctic lakes, put a human face on UC graduate education, reminding legislators of UC’s role as an engine of innovation, knowledge creation and economic growth.

“I was honored to have the opportunity to discuss my research to help inform our state legislators about some of the issues facing our aging infrastructure in California,” Duncan said. “It was inspiring to see the hard work that goes into research and deliberation on the part of assembly members, senators and their staffers. I hope that our dialogue was not only informative, but also that it served to remind them of the resources available to them through the cutting-edge research done at UC Berkeley and throughout the University of California system.”

Freitas concurred: “(Graduate Research Day) gave me insight into the fast-paced atmosphere of the legislative branch of our government and the sheer quantity of information that legislators make decisions about every day. I also realized that our policymakers truly want their bills to be underpinned by scientific thought and that this is a gap that we, as scientists, can better fill.”

Several legislators said they had seen the impact of UC’s research on state policymaking, and that they recognized the potential for future impact. They all expressed appreciation for having access to the UC system’s scientific expertise. Others said they were willing to help students make professional connections and offer career advice about how Berkeley’s graduate students could work within the policy sphere.

“I found the experience extremely informative on the legislative process,” Duncan said. “It is very easy to forget about the important work that we send elected officials to do on our behalf, and even easier to not participate in shaping legislation.”

Related Topics:Graduate Research and Education Advocacy DayUC Berkeley
Up Next