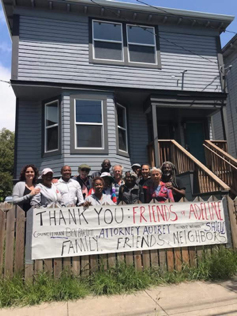 We can now celebrate that Mr. Leonard Powell, a longtime resident of Harmon Street in Berkeley, has been able to return to his home of over 40 years.

Mr. Powell’s neighbors, Friends of Adeline and other residents of South Berkeley stood with him in court and in front of the City of Berkeley, demanding that he get his home back.

We also celebrate and thank The Post newspaper for recognizing and supporting the importance of what happens to people in South Berkeley.  The Post enabled people to know about Mr. Powell’s situation and how to support him in his fight with the City of Berkeley.

In addition, W. Kamau Bell joined with other members of the community to get the word out about this story so that people from all over Berkeley as well as around the country could donate the dollars to help Mr. Powell to move forward and regain his home.

Mr. Powell and the Friends of Adeline are moved by his generosity in assisting us.  It also enabled us to see the power of so many like us, from all over, who with their small donations came together to help in such a big way.

While we are celebrating, we also need to realize that this fight is not over.  There is a growing awareness that the City of Berkeley does not work for us.  Lower-income people in our community should be able to look to the city for assistance in keeping their homes decent and healthy, whether they are owned or rented.

Residents must not be afraid that asking for help will put them and their homes at risk.

The integrated group of neighbors and friends who have been supporting Mr. Powell represent the City of Berkeley that once existed and that we would like to see again.  While the “official” City of Berkeley has been working hard to eliminate its African-American and other low-income populations, many Berkeley residents are fighting to remake it so that we can all continue living here.

We need to build the support for one another to enable our community to remain the place where we all can live and survive.

For more information contact Friends of Adeline at (510) 338-7843 or friendsofadeline@gmail.com